With substantial savings and investments for their age, Joan and James’s aspirations are catching FIRE – the acronym for the “financial independence, retire early” movement inspiring high-earning young people and defined by frugality and extreme savings.

“My partner and I are both 36 and live in Toronto,” Joan writes in an e-mail. They pay a little more than $2,000 a month in rent and have no immediate plans to buy a house or condo. They have no debt and no plans for children, Joan adds.

“We have about $1-million invested in exchange-traded funds, with an additional $100,000 in savings accounts,” Joan writes. “We put aside $6,500 a month toward further investments and retirement savings,” she adds.

They are wondering whether they could retire and perhaps work part-time at age 45 or even sooner. “We do enjoy dining out, going on vacation a few times a year, and just generally not having to feel concerned about making good-quality purchases when we want to,” Joan writes. They want to maintain their lifestyle.

Their one big concern is “unfortunate medical circumstances” later in life that would require one or both of them to go into a retirement home or assisted-living community, Joan adds. “Will we have enough financial security to be able to afford a really nice place?” she asks.

We asked Warren MacKenzie, head of financial planning at Optimize Wealth Management in Toronto, to look at Joan and James’s situation.

Proponents of the FIRE philosophy focus more on financial independence than completely retiring from any kind of work, Mr. MacKenzie says. If they simply retired, they would risk being bored, which can ruin retirement and relationships. Instead, many look for more fulfilling work, taking part-time jobs and doing volunteer work. Joan and James, for example, are passionate about animal welfare and the environment.

Ideally, they could earn enough to cover most of their living costs at least until they began collecting Canada Pension Plan and Old Age Security benefits.

But suppose they never worked for money again. FIRE believers have a rule of thumb that says for a 30-year retirement, people should have capital equal to 25 times their annual spending, Mr. MacKenzie says. "Given that Joan and James’s desired level of spending is $80,000 a year, that would mean they would need investments of about $2-million. If they retire from their jobs at age 45, they could have a 50-year retirement, the planner says, “so by this rule of thumb, they would need more.”

However, they may do some part-time work, and eventually they’ll receive OAS and CPP benefits, the planner notes. “Since the $80,000 spending target includes about $30,000 for travel and other non-essential expenses, they could retire by age 42 if they were willing to cut their discretionary spending if necessary,” he says.

This assumes that while they are still working, they continue to save more than $70,000 a year and earn an average real rate of return of 2 per cent on their investments – that is, a 4 per cent nominal return after fees minus 2-per-cent inflation. “Mind you, a lot can happen in six years, so their plan would need to be regularly updated to see if they’re still on track,” he says. Preserving the purchasing power of their savings would be critical.

With no children to look after them in their old age, Joan and James wonder whether they would have enough to cover the cost of long-term care if needed, the planner notes. They estimate the cost could be as much as $8,000 a month, in today’s dollars, for each of them. “If they are worried about health care and the possibility of needing nursing-home care, they might want to get some quotes for critical illness insurance and consider a long-term health care insurance policy."

Next, the planner looks at the couple’s investments. “Everyone who would like early retirement needs a proper ‘goals-based’ financial plan,” Mr. MacKenzie says. In order to maintain their financial security, here are some changes they should consider.

First, lower their risk. “They are taking much more risk than is necessary to achieve their goals,” he says. They are do-it-yourself investors and almost 90 per cent of the portfolio is in equity exchange-traded funds. “They should have a much larger allocation to cash and fixed income so that they would have some ‘dry powder’ to buy more equities during the next big drop in the stock market.”

The high allocation to stocks is not too big a problem as long as they are still working and saving more than $70,000 a year, the planner says. “They can always delay retirement if their investment portfolio drops in value by 50 per cent.”

But if the stock market plunges after they have retired, “then they would have to significantly cut back on their spending in order to avoid running out of money in their old age." Given today’s economic uncertainty, most retirees and those nearing retirement should be in defensive investments, Mr. MacKenzie adds.

Given the couple’s long time horizon, and with no need for a high level of liquidity, he suggests they add some alternative investments such as private equity and private debt funds to their holdings. “An allocation to these investments would be expected to reduce volatility and slightly increase returns." The couple should make sure they understand whatever risks might be involved in these securities as well as costs that are not readily apparent.

To minimize income taxes in retirement, both parties ideally should have equal income. One way to achieve this would be for James to immediately begin paying all the expenses, allowing Joan to save all of her income between now and retirement. “If they don’t do this, in retirement James will have higher investment income and will be in a higher tax bracket,” Mr. MacKenzie says.

James should set up a spousal RRSP for Joan and make his RRSP contributions to Joan’s spousal plan until their RRSPs are equal in size, the planner says. As well, they should continue to contribute the maximum to their tax-free savings accounts (TFSAs) each year.

The people: James and Joan, both 36

The problem: Have they saved enough to achieve financial independence?

The plan: Be prepared to work part-time once they have left their current jobs as well as cut spending if necessary. Lower their investment risk to match their goals. Strive to split income in retirement.

The payoff: A better appreciation of what financial independence really means.

Can Ned and Nancy meet their retirement spending target without having to downsize?
August 28, 2020 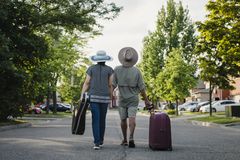 How can debt-laden Pauline and Perry prioritize paying off family loans?
September 11, 2020 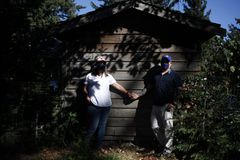