If you have a defined-benefit pension plan and you’re at retirement, you might be wondering what course of action is best: keep the funds in the plan and receive a monthly pension from your former employer in retirement, or cash them out to create retirement income on your own?

If you’re worried about the long-term health of your plan or employer, relying on the plan to provide pension income for a retirement that might last 30 or 40 years – or even more – can feel unacceptably risky. On the other hand, cashing out the pension can mean a hefty tax bill, followed by “taking your chances” in the market. (The tax bill can result when the amount of the pension value that can be transferred into tax-sheltered retirement accounts is more than the tax rules allow, meaning the excess is taxable in the year you receive it.)

For some Canadians, however, there’s a third choice at retirement: transferring the built-up value of your pension entitlement to an insurance company in exchange for a monthly payment that matches what your employer pension would have provided.

That’s the path recent retiree Dave Anderson took with his pension from General Motors, where he’d worked at GM’s propulsion plant in St. Catharines, Ont., for 35 years as a line worker, pattern maker and then engine designer until his retirement on Jan. 31.

Mr. Anderson says he started thinking seriously about retiring from GM “in 2017 or early 2018,” and when GM offered a voluntary buyout in October of 2018, he decided it was time to pull the trigger. When the news that GM was closing its Oshawa, Ont., assembly plant followed shortly afterward, he turned to his cousin, financial advisor Bruce Youngblud in Dundas, Ont., for assistance.

“Bruce introduced me to the idea of ‘getting a pension from someone other than GM,’ ” Mr. Anderson says. “But there’s a lot more to it,” he adds.

What Mr. Anderson ended up opting for was a “copycat annuity,” or a life annuity from an insurance company that copies what his pension would have paid him. This option has been around since 1997, when the Income Tax Act was amended to change the rules that govern how the funds in registered pension plans can be used to purchase life annuities.

With a copycat annuity, the “commuted value” of a pension entitlement can be used to purchase an annuity directly, instead of being withdrawn as taxable cash. In this way, a retiree can get the benefit the pension would have provided and avoid the tax that might be levied on the “commuting to cash” option, while also avoiding the risk associated with staying in the plan.

In addition to the monthly pension benefit, the copycat annuity must also provide all the other rights and benefits under the employer pension plan – such as the right to a survivor pension or a guarantee of payments over a given period.

Decide how to transition

Mr. Anderson says he struggled with understanding which decision would be best in his situation. “There’s a certain part of me that thinks taking the commuted value as cash would have been a great thing to do, except I wasn’t willing to take the financial hit of the tax bill.

“On the other hand, I wasn’t comfortable opting to get a pension, over the long term, from a company that isn’t in the business of paying pensions. If I took the cash value, and then died early, I’d leave a financial legacy for my estate, which the pension doesn’t provide. But what I have instead is what the pension was promising me, only with more security," Mr. Anderson says.

"In the end, I could justify the decision in that way: I wasn’t really giving anything up; I was keeping what I already had – but making it stronger.”

How do copycat annuities fit?

The choice to commute a pension entitlement to a copycat annuity isn’t available for every pension plan member, but the option can be appealing for those retirees whose plans permit it.

Ontario is the only jurisdiction that provides some protection to plan members whose plans are wound up with insufficient funds. As a result of the Sears Canada bankruptcy, Ontario’s Pension Benefits Guarantee Fund increased its coverage to monthly pensions of $1,500 – but not all plans are covered.

Annuity payments from a life insurance company are insured against default by Assuris, which covers up to $2,000 a month or 85 per cent of the promised monthly income benefit, whichever is higher. Life insurance companies are also subject to a “capital adequacy test” to ensure they can meet and manage risks and fulfill their obligations to policyholders.

The tax rules also allow payments from a copycat annuity – both lifetime and any bridge benefits – to qualify for pension income splitting, no matter the age of the person receiving the payments. (For Quebec provincial tax purposes, there is an age 65 requirement.)

In comparison, if the plan member transfers an amount to a (locked-in) retirement savings account, they would have to wait until at least age 65 to qualify for pension splitting – and could only then split the income if the form in which it was drawn qualified for splitting, such as payments from a life annuity purchased from the locked-in retirement savings account.

Is a copycat for you? Seek informed advice

“Copycat annuities can be a very effective tool in the right circumstances for a retiring employee who wants to stay in a defined-benefit environment,” says Lea Koiv, a Toronto-based advisor who has worked with copycat annuities for the past decade.

“However, they can be poorly understood by advisors and retirees alike. For example, while it is true that annuity payments increase when interest rates rise, the prevailing interest rate is not a factor in a copycat annuity purchase, as the funds move ‘sideways’ from the company pension plan to the annuity: The commuted value paid by the plan and the purchase price of the annuity move in tandem.

“A bigger issue,” she comments, “is that a plan member may not realize that the copycat option exists. Financial advisors providing advice in this area need to be careful to ensure they are presenting all options to a retiring client, so that client can make a choice from everything that’s available.”

Advisors also need to ensure that the annuity, if purchased, meets Canada Revenue Agency (CRA) guidelines to qualify it as a copycat annuity. This is especially important where the commuted value of the original pension is not sufficient to exactly match the provisions of the new or copy-cat pension. If this happens, CRA will generally allow the lifetime and ancillary benefits to be reduced, as long as no other changes are made.

“If the rules aren’t followed, the purchase price of the annuity will be included in the plan member’s income,” Ms. Koiv says. She notes that she’s provided advice on “a large number of complex cases” to help make sure copycat annuities make the grade.

Restoring certainty ‘to let me sleep at night’

As for Mr. Anderson, once his choice was made, putting the plan in action was relatively straightforward. Mr. Youngblud sought annuity quotes from life insurance companies, and he and Mr. Anderson selected the best option: “the one that lets me sleep at night.”

Now that retirement is upon him, his future plans include spending more time with their grandchildren – "No job to plan around!” – and travel with his wife, Carrie, whether “south for the sunshine or east to Europe.” 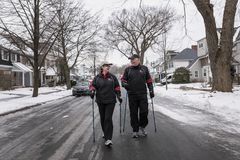