Skip to main content
Frederick Vettese
Special to The Globe and Mail
Published May 18, 2020Updated May 19, 2020

Stock market investors have been in for a rough ride in the past couple of months. Even though the markets have recovered somewhat, forecasts abound for much lower stock prices over the next year or two. How do you cope with this possibility if you are getting close to retirement?

One remedy is to shorten your investment horizon, otherwise known as the period over which you have investments to manage. Imagine if you only had to worry about what your investments were going to do over the next five years instead of the next 25.

But how does a shorter investment horizon jibe with a desire to enjoy a healthy income throughout your retirement years? Turns out these two goals are not as incompatible as they seem.

A Tale of Two Couples

The Thompsons elect to receive their Canada Pension Plan and Old Age Security benefits immediately. To reach their income target of $62,000 in Year 1, the rest of their income must be drawn from their registered retirement income fund (RRIF). All these figures change slowly in subsequent years as the income target gradually rises. The first accompanying bar chart shows the end result.

The Thompsons can maintain their income until the age of 88, at which point the RRIF assets run out. The Thompsons therefore have an investment horizon of about 24 years (from the age of 65 to 88), which is a long time to be worrying about the stock market.

The Singhs take a different tack. They wait until 70 to start their CPP pensions, at which point the starting amount will be 42 per cent larger in real terms. In addition, they redirect $100,000 of their $500,000 in RRIF assets to an insurance company to buy a joint life annuity. Their projected income is shown in the second bar chart.

The Thompsons have a long

Investment horizon for the Singhs

The Thompsons have a long

Investment horizon for the Singhs 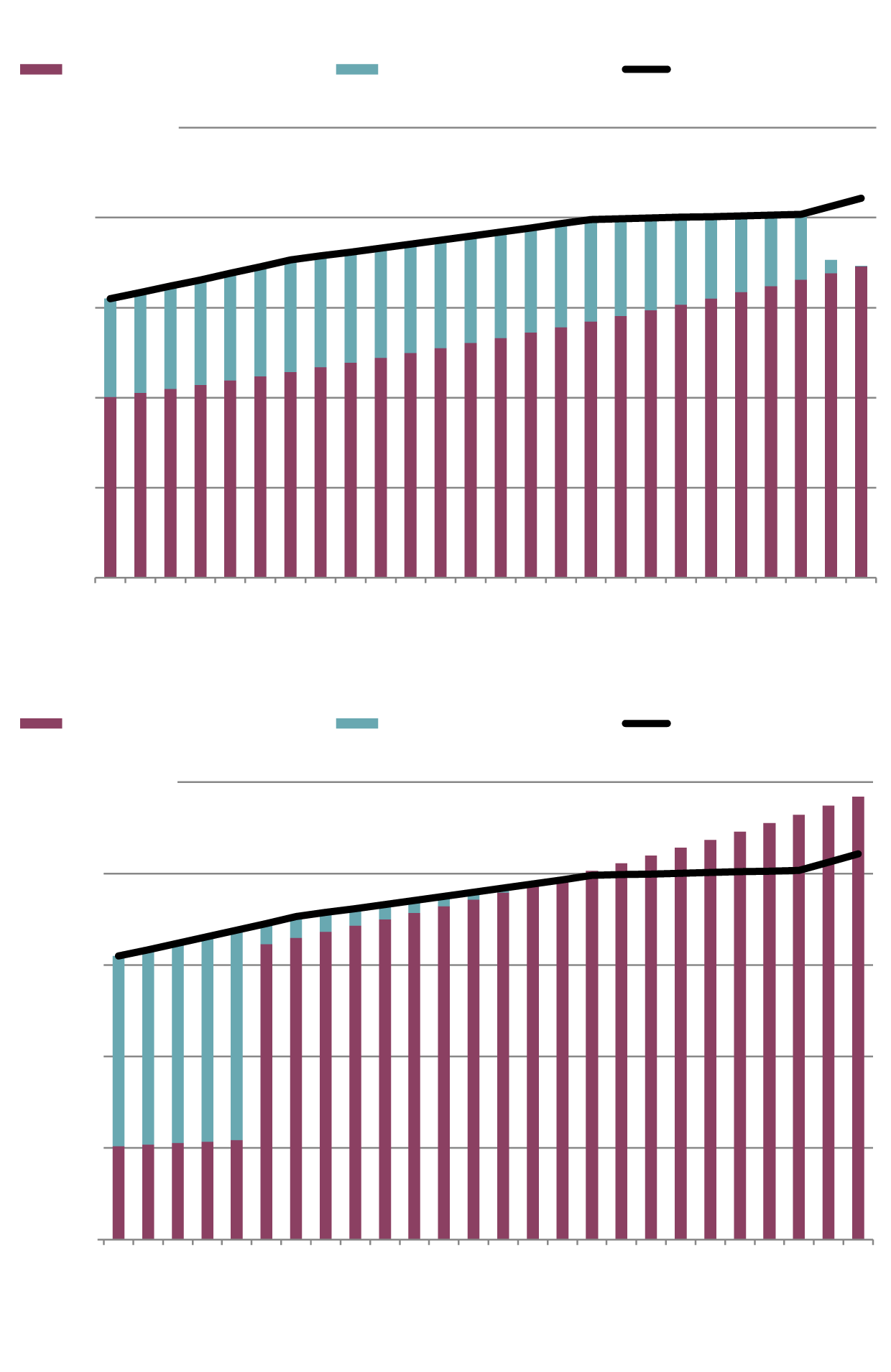 The Thompsons have a long investment horizon

Investment horizon for the Singhs is much shorter

You will find that the Singhs are drawing more income than the target from the age of 82 and on and they never run out. By 90, the excess income is about $15,000 a year since they are getting so much guaranteed income from government sources.

What is noteworthy is that most of the Singhs’ RRIF income is concentrated in the years before the age of 70, which makes their investment horizon about five years. That is because they are drawing their RRIF down rapidly in those years to replace the CPP pensions that they decided to forgo until 70.

While not shown in the chart, they still have substantial RRIF assets left after 70, more than $200,000 in fact by the age of 90. (They are still required to draw a certain amount of it each year, but I am ignoring it in the chart since they can withdraw it, pay income tax and then redeposit the balance into a tax-free savings account.)

It is hard not to notice that the Singhs receive substantially more lifetime income than the Thompsons with much less effort. The real point, however, is that the Thompsons have an investment horizon of nearly 25 years compared with a little more than five years for the Singhs.

That longer investment horizon exposes the Thompsons to no end of potential trouble. The next black swan might be a pandemic or it might be something else, but anything that happens after the age of 70 is of little concern to the Singhs, at least not financially.

In summary, the Singhs are so much further ahead than the Thompsons because they transferred a great deal of risk to both the government and an insurance company, and also because they protected themselves against potentially poor longer-term investment returns.

Now that the Singhs have shortened their investment horizon so dramatically, it raises the question of whether they should expose themselves to market risk at all. Maybe they should simply put their RRIF money in a guaranteed investment certificate or a bank savings account instead for the next five years. They might not get a very high return, but at least they won’t lose money. In the process, they would eliminate investment risk entirely rather than having to worry about a financial meltdown for another five years.

The Thompsons do not have this option since their investment horizon is so long. They are forced to continue taking their chances with stocks because they otherwise have no hope of eking out a better return. The question is, why would they bother when a less risky path is open to them?

Frederick Vettese is former chief actuary of Morneau Shepell and author of Retirement Income for Life; an updated and expanded edition will be released in October.

opinion
For older workers, the pandemic employment plunge may be tougher to pull out of
May 18, 2020
With seniors isolating, several organizations are short on volunteers
May 14, 2020
Anyone eligible for the Old Age Security pension, even high-income individuals, will get the emergency benefit of $300
May 15, 2020
opinion
Seniors deserve help with expenses in the pandemic, but investment losses are another matter
May 12, 2020