So much for New Year’s resolutions. My brother-in-law, Peter, said that he was going to run on his treadmill for 20 minutes every day in 2019. When I called him yesterday, he confessed that he has already spent more time eating cake than running on his treadmill, which has remained unplugged since New Year’s Eve. I thought his resolution was a bit ambitious, so I suggested that he make good on his other resolution: to pay less tax in 2019. Given where interest rates are today – and along with those rates, the taxman’s prescribed rate – now is a good time to consider some tax moves for 2019.

The prescribed rate is set each quarter and is based on the average 90-day Government of Canada T-bill rate for the first month of the prior quarter. The Canada Revenue Agency announces the rate for each quarter just prior to the start of the quarter, and you’ll find this information by searching the term “prescribed rate” on CRA’s website.

Why is the prescribed rate important? Well, the rate charged on overdue taxes, or paid on excess taxes remitted, is derived from the prescribed rate. Also, it’s the rate used to calculate taxable benefits on interest-free or low-interest loans to an employee or shareholder, and the rate that applies to loans between family members who want to split income.

The rate has been at historic lows in recent years, and as of Jan. 1 is set at 2 per cent for the first quarter of 2019 – still very low by historical standards – and likely lower than we’ll see over the next two years. So, how can you take advantage of the low prescribed rate today?

If you choose to lend money to your spouse, any income earned on the money will be attributed back to you and taxed in your hands. You can avoid this attribution, however, if you charge the prescribed rate on the loan.

Suppose, for example, that Peter lends Janice $100,000. The plan is for her to invest the money and pay the tax on any income, rather than Peter paying tax at his higher rate. Peter could charge the 2-per-cent prescribed rate on the loan. Janice would have to pay this interest every year by Jan. 30 for the prior year's interest charge. Peter will be taxed on the 2 per cent paid to him, and Janice would get a deduction for the amount paid to Peter, but they will come out ahead from a tax point of view as long as Janice earns more than 2 per cent on the money that she has borrowed from Peter.

The higher the amount Peter lends to Janice, the more the tax savings. Also, this idea makes the most sense if Janice is actually earning income on her investments. If she’s investing for capital growth, and doesn’t realize any income for several years, the value of this idea is significantly reduced.

You can make a similar loan to your minor children if you make that loan through a family trust. That is, you could lend money to the trust at the prescribed rate of interest, and any income earned on those funds by the trust can be taxed in the hands of the minor children. Be careful that the loan doesn’t come from a business related to you, otherwise the tax on split income (TOSI) rules could apply to deny this income-splitting. Speak to a tax pro to ensure you’re doing this right.

Finally, approach your employer for a loan if you can. If you borrow from your employer and pay the prescribed rate of just 2 per cent on the loan, you won’t face a taxable interest benefit even though the interest rate is lower than what you’d get from a bank. If the loan is used to finance a home, the prescribed rate in effect at the time of the loan is locked in for a full five years. So, borrow from your employer on or before March 31 at the current 2-per-cent rate while you can.

Make good on your New Year’s resolutions with a home-based business
December 27, 2018 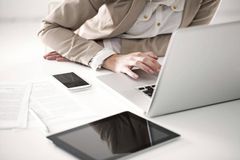 What is a fair percentage fee to pay an investment firm?
Subscriber content
December 12, 2018