Canadian banks may be interpreting the term "high-interest" a bit more loosely than the consumers they're hoping to sign up.

After all, few people would consider 1 per cent to be a high interest rate on their savings account.

But that's precisely what has been unfolding in recent months as the economic downturn has made it more difficult for banks to offer truly high rates.

"We are at historical lows," said Peter Aceto, president and CEO of ING Direct Canada.

Bank accounts marketed as "high-interest" have become one of the most popular account offerings in Canada in the past few years, and banks have jostled with each other to offer consumers the best rates. Consumers have been able to take advantage of a 3 or even 4 per cent return on the balance of their everyday chequing or savings account. The offerings became even more tempting after the introduction last January of the Tax-Free Savings Account, which promised a higher rate of return than most bank accounts.

But in recent months, those rates have steadily declined as the global financial problems deepened and Bank of Canada slashed its lending rates to historic lows. Now, consumers would be hard-pressed to find bank accounts at major institutions that offer interest rates higher than 1.35 per cent.

"We do have this quandary," Mr. Aceto said. "It is a very low interest rate environment."

So why are the banks still advertising their accounts as having high interest rates?

"[The rates are]not going to be this way forever and I think Canadians are doing the right thing in spite of that by saving their money," Mr. Aceto said.

Financial institutions set their interest rates based on the Bank of Canada's rate, which means they may be subject to change at any given time. Banks reserve the right to set and change the rates on high-interest accounts and other financial products and aren't obligated to send letters to consumers regarding changes, according to the Financial Consumer Agency of Canada. While they must post a general notice in bank branches and on their website when rates change, they are not obligated to provide advance notice to the public, the agency said.

While some banks may offer promotional rates above prime, as ING Direct is currently doing with its Tax-Free Savings Account, the interest will generally be lowered back down at some point until it's lower than prime.

But high-interest savings account rates are "still relatively strong" compared to some fixed options, like GICs, said Blake Hellam, senior vice-president of retail banking for HSBC Bank Canada. The bank's 19-month non-redeemable GIC currently has a rate of 1.5 per cent, a rate that rises with the length of the certificate's term, which is higher than the 1.05 per cent offered under its high-interest account. The advantage is consumers with the high-interest account will get to take advantage if interest rates rise in the next few months, whereas the interest on GICs will stay the same for the length of the certificate. The GIC also can't be redeemed before its term ends without losing the interest.

However, those who don't feel like waiting may want to start exploring their options, said David McVay, a financial services industry consultant with Toronto-based McVay and Associates.

Mr. McVay said while many banks can't afford to offer high interest rates that exceed Bank of Canada's prime lending rate of 2.25 per cent, there are some smaller players who can be a bit more competitive.

He highlighted ICICI Bank Canada, a subsidiary of a major Indian bank, which offers 1.6 per cent interest on its "HiSave" savings account.

"They're probably the best-kept secret out there," Mr. McVay said.

However, even ICICI's interest rates have slipped in recent months, from 2.5 per cent in March.

Canadian Tire Bank currently offers an interest rate of 1.75 per cent on its high-interest account, down from 2.5 per cent in March.

Despite falling interest rates, a growing number of Canadians been turning to savings accounts because "they offer liquidity and security, particularly given the volatility of the markets in the last year," Rob McLeod, senior director of communications and public affairs at the Canadian Imperial Bank of Commerce said in an e-mail.

For the most part, Mr. McVay said he believes consumers have given up hope their banks will reward their efforts to save by offering an attractive interest rate and are instead focusing on the reward that comes with putting a lot of their money in the bank.

"My observation is consumers have stopped shopping around," he said. "They're just parking the money, waiting for the market to turn around, or have accepted the fact they're not going to get much [out]of their savings account and just don't bother to shop around any more."

Don't be fooled by the advertising lingo - the recession has taken a toll on the ability of banks to offer truly high rates of return on savings accounts. That means even the highest of high-interest accounts may leave some consumers wanting. Here is a snapshot of the rates currently offered by some Canadian banks:

How much would you earn?

Interest rates have fallen sharply worldwide as a result of the global financial crisis, and high-interest savings accounts are no exception. But what do the changes mean to consumers? Here is a comparison of the interest a $5,000 bank balance would earn if the rate were 1 per cent compared with versus 3 per cent: 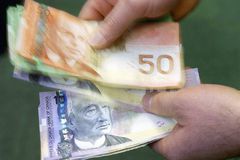 Follow Carly Weeks on Twitter @carlyweeks
Report an error
Due to technical reasons, we have temporarily removed commenting from our articles. We hope to have this fixed soon. Thank you for your patience. If you are looking to give feedback on our new site, please send it along to feedback@globeandmail.com. If you want to write a letter to the editor, please forward to letters@globeandmail.com.
Comments