Confidence in the sector proves a key driver

The COVID-19 pandemic has been a troubling time for all Canadians, including charities and nonprofits that have struggled to meet the needs of the most vulnerable in society – people coping with challenges ranging from finding a safe shelter for a night to the complexities of living with a terminal illness.

With many Canadians focused primarily on their own family’s welfare in the face of job losses, economic uncertainty and fear for the safety of themselves and their loved ones, charitable donations were widely expected to drop during the pandemic and leave charities struggling.

While, on average, charities reported a 16 per cent decline in revenue over the past year, the recently released results of a Canada-wide survey conducted for the Association of Fundraising Professionals (AFP) Foundation for Philanthropy – Canada found that persistent support from Canadian donors helped the sector to continue making a crucial impact at a time of heightened need.

In fact, in the 12 months since March 2020 when the pandemic was declared, more than three-quarters of Canadians who had given previously to charity continued their philanthropy and gave larger gifts than in past years.

The survey results are a heartening sign, says Susan Storey, chair of the AFP Foundation for Philanthropy – Canada, which works to advance philanthropy across the country. She says it would have been easy for Canadians to only look inward, but instead they remained sensitive to the needs of their neighbours and communities and have come together to help one another through these tough times.

“Canada is a phenomenally, uniquely generous nation, and philanthropy, at its core, is about helping others and strengthening communities,” she says. “So, it’s not surprising that for those that could give, they did – and generously.”

AFP Canada, which represents the voice of charitable fundraisers across the country, has seen this play out with many organizations. AFP Canada volunteer Stewart Wong, vice president, communications, marketing and advocacy at Toronto’s Holland Bloorview Kids Rehabilitation Hospital, attributes the dedication of the hospital foundation’s fundraising team for a record-breaking year of donations.

“Through incredible diligence, mission-focus and innovation, our foundation connected with donors in new ways to have a record fundraising year,” he says. “We were fortunate to have laid a strong digital fundraising framework over the last several years that allowed us to quickly transition to online fundraising and activities.”

In addition to its online fundraising, the foundation moved its major fundraising events to virtual formats and in some cases attracted more donations than targeted for the event.

Both Mr. Wong and Ms. Storey agree that the challenge now is to maintain the momentum.

“We will carry forward the successes of the past year by building on our digital fundraising activities, using virtual activities to engage our donors in unexpected ways, creating fun video content to make events come alive and steward our donors, and continuing to amplify the experiences of the youth and families we serve to make our work come alive,” says Mr. Wong.

Ms. Storey adds that the philanthropic response to the pandemic has been exceptional. 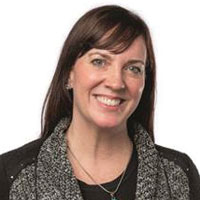 “ Canada is a phenomenally, uniquely generous nation, and philanthropy, at its core, is about helping others and strengthening communities. So it’s not surprising that for those that could give, they did – and generously.”

Susan Storey
Chair of the AFP Foundation for Philanthropy – Canada

“The ideal would be that it inspires further engagement by caring Canadians on an enduring basis for the causes and organizations that make our communities thrive,” she says.

A key driver in continued support is the confidence Canadian donors have in the charitable sector. The survey found that 87 per cent of respondents – the highest number ever – are confident in the sector, a nine-point increase over the 2017 survey finding.

“That so many donors remain confident in the work done by our sector is a testament to the daily dedication of charities and the immense impact they have across Canada,” says Ms. Storey. “And it’s not just the work they do, but how they do it as well. The increase in donor trust indicated in the survey about how charities use donations and how they are managed is very important.”

While the survey found that only 23 per cent of respondents volunteered for work with charities in the year to March 2021 compared to 33 per cent in 2017, 57 per cent gave COVID-19 as the reason they decided not to volunteer.

However, John Gormaly, chair of the AFP Foundation for Philanthropy – Canada Research Committee, says the finding that 25 per cent of Canadian donors still volunteered in 2020 is impressive and demonstrates the commitment that many Canadians have to helping others.

Holland Bloorview’s volunteer team dropped from approximately 1,000 a year to just 265 volunteers mainly due to pandemic-related restrictions to onsite programming and attendance.

“Even before the pandemic, 80,000 children were on waitlists for child development and rehabilitation services in Ontario. The health implications of delayed care go well beyond the pandemic,” he says. “As a health-care system, we’ll need focused attention to deal with this crisis.”

AFP Canada and its Foundation for Philanthropy will continue to encourage Canadians to give and volunteer because their impact is so powerful and affects so many Canadians in every province.

The Association of Fundraising Professionals (AFP) represents more than 3,000 Canadian fundraisers and charities, and more than 26,000 around the world, partnering with donors and volunteers to change the world through ethical and effective fundraising. AFP helps its members raise more than $100-billion annually for a wide variety of causes through advocacy, research, education, mentoring and the most rigorous code of ethics in the profession.

Advertising feature produced by Randall Anthony Communications with The Association of Fundraising Professionals Canada. The Globe’s editorial department was not involved.