Coronavirus information
The Zero Canada Project provides resources to help you make the most of staying home.
Visit the hub
Content from: Coronavirus Research report
Published May 18, 2020 Updated May 18, 2020

With its ability to forge a path of destruction through the human body and spread to every corner of the world, the new coronavirus, SARS-CoV-2, is challenging humanity to formulate a fast response. Yet the COVID-19 pandemic – which has affected 213 countries and territories to date and caused about 300,000 deaths in just four months – has also united companies, academia and governments across borders and inspired a massive global collaborative research effort to advance our understanding of the virus to, ultimately, save lives.

“Academics from institutions around the world and pharmaceutical and diagnostic companies have to work together to come up with timely measures,” says Dr. Salim Yusuf, executive director of the Population Health Research Institute (PHRI), a joint research institute of McMaster University and Hamilton Health Sciences and Canada’s premiere global health research institute. “We have to combine our efforts and skills to ensure we get results as quickly as possible, because the longer this takes, the more people will die.”

Mitigating the impact of the coronavirus will depend on having effective treatments and vaccines, says Dr. Yusuf, who is one of the world’s top 20 most highly cited researchers, according to the Webometrics Ranking of World Universities.

Spearheading efforts to determine treatment options are PHRI and the Canadian arm of Bayer, which have committed $0.5-million and $1.5-million respectively to initiate a major clinical research program: the Anti-Coronavirus Therapies to Prevent Progression of COVID-19 (ACT) study.

“Pharmaceutical companies are well positioned to work on finding new therapies and vaccines for COVID-19,” says Dr. Shurjeel Choudhri, senior vice-president and head of Medical and Scientific Affairs at Bayer Canada. “We have the expertise and the global infrastructure. We also have products that can potentially be repurposed and examined for whether they work against COVID-19. There are already hundreds of clinical trials for therapeutics and over 70 programs for developing vaccines under way. This shows the capabilities of the industry and how they can be leveraged by working together with academia.”

PARTNERING FOR A QUICK RESPONSE

Collaborations with academic experts and research networks around the world, which have been established as part of Bayer’s ongoing research and development efforts, can provide a valuable foundation, says Dr. Choudhri. “Our partnership with PHRI is an example where an existing relationship and open communication channels have allowed us to respond very quickly to an urgent question.”

From a phone call between Dr. Yusuf and Dr. Choudhri, teams at PHRI and Bayer Canada worked tirelessly to design and launch the study. As a result, it took only 30 days from the initial discussion about the study to the first patient being enrolled.

“This is truly remarkable. It typically takes 12 to 18 months to get the protocol written and obtain approvals,” says Dr. Choudhri, who adds that Bayer has pledged to supply study drugs, namely chloroquine, interferon-beta-1b and rivaroxaban, to support the research.

These drugs are on a list released by the World Health Organization (WHO) to promote the investigation into medication that is already approved for other diseases and known to be largely safe as well as unapproved drugs that have performed well in research associated with the other two coronaviruses that cause severe acute respiratory syndrome (SARS) and Middle East respiratory syndrome (MERS).

“It is gratifying to see the inclusion of Bayer drugs that could have some benefits in this space,” says Dr. Choudhri. 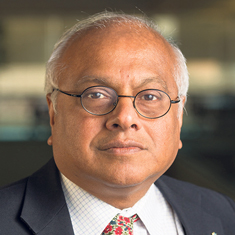 We also need to know how to treat people who test positive and have mild or no symptoms. Keeping people from getting so sick that they need to be in the hospital would be the next best thing to a vaccine.

“It is now becoming quite clear that marked inflammation is the hallmark of severe COVID-19 disease,” says Dr. Yusuf. “This inflammation tends to destroy the lungs and damage the heart, brain and kidneys. There is also superimposed thrombosis, [the formation of blood clots], which chokes the blood supply to key organs.”

Dr. Yusuf calls for “repurposing existing drugs that have shown to be useful in controlling some of the manifestations of the disease in similar infections.

“Interferon-beta has antiviral effects and choroquine blocks the entry of the virus into the cell. Anti-inflammatory drugs such as colchicine reduce the secondary inflammation, and antithrombotics (rivaroxaban and aspirin) prevent clotting in the blood vessels,” he explains. “We believe it is an approach of combination therapy targeting different pathways that will likely lead to the greatest benefit.”

In response to recommendations from scientists, the WHO is focusing on what it considers four of the most promising therapies: an experimental antiviral compound that has been useful in addressing Ebola (remedesvir); the malaria medications chloroquine and hydroxychloroquine; and a combination of two HIV drugs and interferon-beta.

The stated criteria for selecting this group of drugs includes the highest likelihood of working, the most safety data from previous use, and availability of sufficient supplies to treat substantial numbers of patients if the trials show they work.

The ACT study will investigate the effects of a combination of medications, including chloroquine, azithromycin, interferon-beta, colchicine and antithrombotic drugs, on COVID-19 patients.

What do these drugs bring to the table? Chloroquine is an anti-malaria and anti-inflammatory medication that was developed in 1934. The drug, which is also used for treating rheumatoid arthritis and lupus, has already been proven to be effective in decreasing viral replication in vitro, i.e. test tube experiments. The antibiotic azithromycin, which is widely used to treat chest, sinus, throat and skin infections, is thought to inhibit both inflammation and viral replication.

“And interferon-beta is used against multiple sclerosis, but it has also shown to have activity against the SARS and the MERS viruses,” says Dr. Yusuf. “It’s not unreasonable to conjecture that it might have an effect on COVID-19, but we still have to test that.” Colchicine can potentially blunt the severe inflammation, termed the cytokine storm, and the combination of low doses of rivaroxaban and aspirin can prevent secondary blood clots.

There have already been some small studies that looked at the chloroquine and azithromycin combination, but Dr. Choudhri cautions that the results are difficult to interpret due to the lack of adequate controls and randomization.

“Without conducting large randomized control trials, it is impossible to answer the questions: Do these treatments work? And do the benefits outweigh the harms?” he says. “With the ACT trial, we will see if the virus is responding to the treatment. At the same time, there is ECG monitoring in place to detect QT prolongation, [a sign that the heart muscle takes longer than normal to recharge between beats]. This helps to ensure these drugs don’t increase the risk of serious side-effects such as cardiac arrhythmias.”

While the majority of people experience only mild symptoms after contracting the coronavirus, physicians report that some patients’ conditions can deteriorate rapidly. The ACT study will look at medical interventions at different disease stages by enrolling two cohorts: inpatients and outpatients.

“When people are admitted to the hospital with advanced symptoms, we need answers for what should be done to reduce the risk of disease progression that leads to intensive care, mechanical ventilation and death,” says Dr. Yusuf. “But we also need to know how to treat people who test positive and have mild or no symptoms. Keeping people from getting so sick that they need to be in the hospital would be the next best thing to a vaccine.”

Dr. Choudhri also sees the inclusion of outpatients as “an important and unique aspect of the trial.

“So far, most large studies have been done in hospitals and often on patients who were already on mechanical ventilation,” he says. “At that time, the disease is typically so severe that it can be very difficult to know whether a drug is making a difference.”

With plans for more than 100 contributing research locations and approximately 4,000 patients, Dr. Choudhri also hopes for important insights into who is most at risk for severe outcomes from COVID-19, including differences relating to ethnicity and underlying comorbidities. 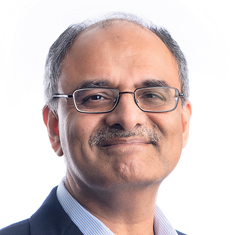 Pharmaceutical companies are well positioned to work on finding new therapies and vaccines for COVID-19. We have the expertise and the global infrastructure. We also have products that can potentially be repurposed and examined for whether they work against COVID-19.

PREPARING FOR A FUTURE SHAPED BY THE PANDEMIC

Conducting the study in multiple locations, including areas with active viral transmissions like South America, the Middle East, Russia and the Philippines, can help to provide answers at a time when “we have already flattened the curve of the first wave in Ontario,” says Dr. Choudhri. “While we see relatively few new cases in the Hamilton area at the moment, we’ve learned from past pandemics that they come in multiple waves. Ten years ago, when we had the last major influenza pandemic, H1N1, there were at least three waves. And going back 100 years to the Spanish flu, there were multiple waves – and the second wave was deadlier than the first.”

In order to maximize the chance for conclusive findings, the ACT program has been designed as an adaptive platform where new treatment arms can be added as potential new therapies are identified. Other treatment arms can be discontinued when therapies are proven to be ineffective or harmful, says Dr. Choudhri. “It’s a model for the type of trial we need against this virus.”

Dr. Yusuf adds, “Since this pandemic will likely be with us for a while, these efforts can contribute to our understanding and help patients [where and when outbreaks occur].”

Finding treatment options, developing a vaccine and promoting measures that can help to limit the spread of the coronavirus all need to be part of the toolbox to address the pandemic, and Dr. Choudhri welcomes an increased sense of collaboration.

“It is really gratifying how academic researchers and industry have come together both locally and internationally to address this huge challenge,” he says.