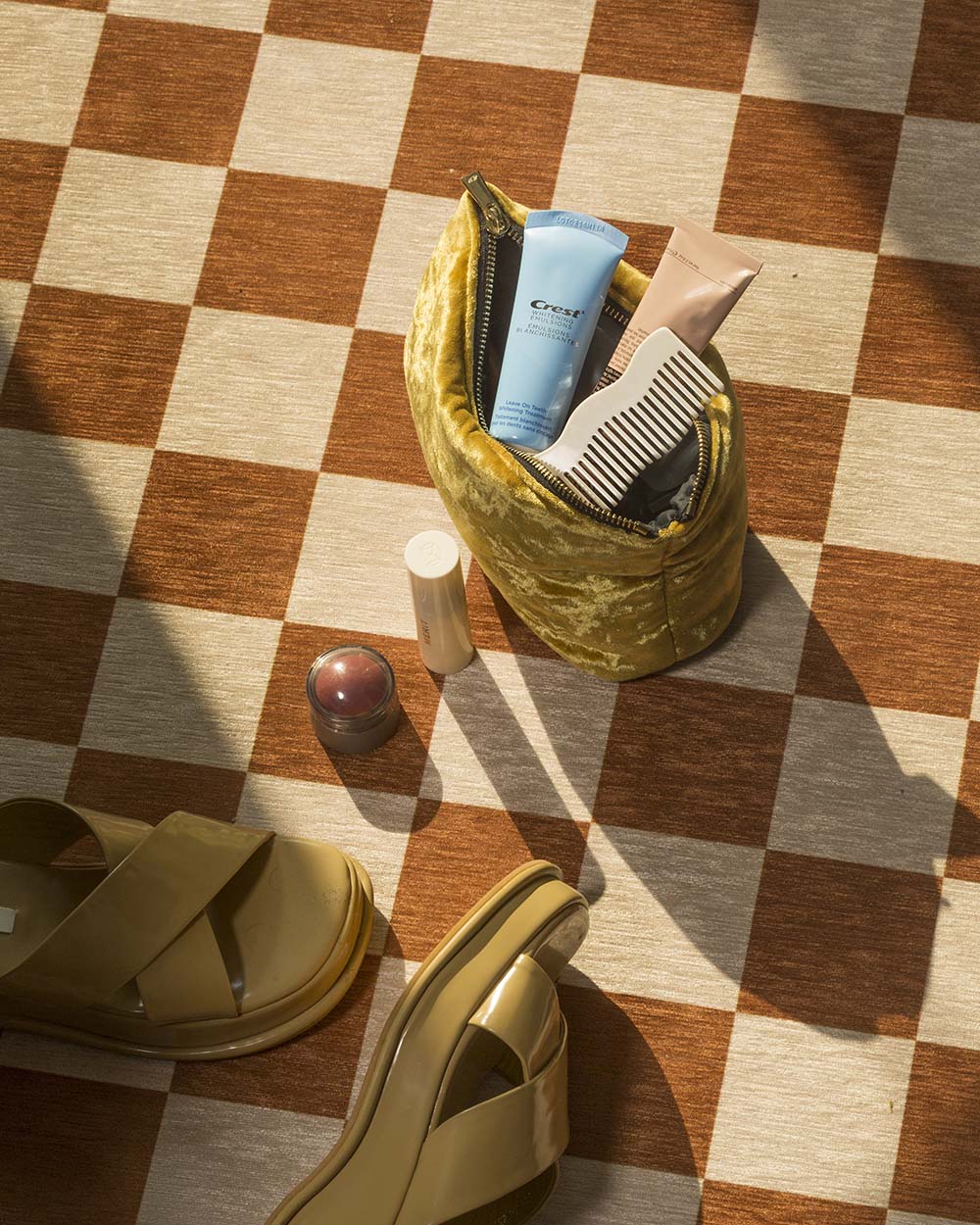 Growing up in St. Catharines, Ont. in the early 2000s, magazines like Seventeen and Teen Vogue were Danielle Reynolds’ gateway to the wider world.

“I would count down the days until they would arrive in my mailbox,” she recalls. As a preteen Reynolds spent hours absorbed in fashion spreads and ads for body glitter, yet had no idea there was an actual person responsible for creating the work she loved to pore over. “If you look at the beauty editorials in a magazine, you can tell there’s a lot of product styling involved, but at the time it didn’t really click that it was someone’s job.”

Now a millennial multi-hyphenate—content creator, art director, prop stylist and photographer—Reynolds has built a successful career creating the kinds of images she was obsessed with as a teen.

She got her first taste of prop styling and art direction while she was still a student at Ryerson University. “I didn’t have lights or anything so I would just use sunlight, and I didn’t have any money for props, so I just used what was in my fridge,” she says. Eventually, after styling multiple shoots just for fun on her own Instagram, her photos began generating enough buzz that brands started reaching out, asking to collaborate.

Reynolds parlayed her incredible eye into a career creating visuals for brands, but she always worked full-time at agencies—until the pandemic hit. In October 2020, she was laid off from her job and took the opportunity to pivot to working freelance. Now she arranges intricate tableaux in her one-bedroom apartment in downtown Toronto. “I shoot pretty much everything on my kitchen table,” she says. “I’m lucky that a lot of my clients are tabletop products like skincare and CBD, so I can make it work in such a small space.”

Regular routines help creatives get down to business

Every day working from home is “organized chaos,” she says. Reynolds typically wakes up between 8:30 and 9 a.m.—”I’m not a morning person,” she comments—and makes herself a smoothie while listening to a news podcast like The Daily or Front Burner. “Especially when I’m home by myself, I like to know what’s going on in the world,” she says. Mornings are typically spent answering emails or beginning to set-up for an indoor photoshoot. “I feel like half my day is just flipping around furniture and moving all my personal things out of the shot. I have one closet in my apartment and, instead of using it to store clothes, there’s props and camera accessories in there. It’s pretty funny, but I guess that’s where my priorities are right now.”

When there’s so little separation between work and life, self-care becomes a priority. Reynolds likes to keep it cozy during the work day, favouring soft clothes like sweatpants or Lululemon leggings. “If I have a call, I’ll put on a nice shirt and makeup and do my hair, but it’s been pretty nice to just feel comfortable.” What gives her the most confidence on a Zoom call—even more so than putting on a great outfit—is a white smile. “We used to be able to go about our day without seeing our face all the time but now that there’s so many more video chats, I really notice it when my teeth aren’t so white,” she says. For a brighter smile, Reynolds uses Crest Whitening Emulsions, a product that can be conveniently applied any time throughout the day to remove surface stains, and virtually doesn’t cause the tooth sensitivity typically associated with whitening products.

When I got my braces taken off as I was a kid, it felt like a life-changer. I felt so good about my smile. That’s how I feel when I use Crest Whitening Emulsions.

Reynolds favours clean beauty and keeps her skincare routine relatively simple. After cleansing in the morning, she dabs a little bit of foundation, concealer, eyebrow pencil and mascara, all from clean beauty brands. “My skin’s pretty sensitive so I like to treat it well,” she says.

When it comes to food, Reynolds prefers to cook for herself. “I pretty much never order in.” At the beginning of the week she’ll cook herself a big pot of grains, like quinoa, and use it as a base for creating veggie bowls throughout the week. When she does choose to indulge, it’s usually on coffee and wine. “My partner owns a cafe and wine bar, so we’re often sampling the products he brings in for work.” Knowing her two favourite indulgences stain teeth quite easily, she uses Crest Whitening Emulsions to keep her smile looking its best. “When I got my braces taken off as I was a kid, it felt like a life-changer. I felt so good about my smile. That’s how I feel when I use Crest Whitening Emulsions,” she says.

Because she begins her workday late, Reynolds will work straight through the afternoon until 7, 8 or 9 p.m.—especially if she’s on a roll. She ends each day with some kind of movement – either a long run or a YouTube pilates workout. “I find exercise really helps my brain realize that work is done and it’s time to relax.”

Evenings are dedicated to self-care. Reynolds likes to curl up on the couch and watch soothing nature documentaries with her partner. When it’s time for bed, she makes two cups of herbal tea, lights a candle and then chills in bed for an hour, either watching a show or perusing a magazine seeking inspiration for her work in the colourful images and spreads. As Reynolds can attest, sometimes it’s important to go back to where you came from.

For this meditation teacher, the secret to self-care is space, grace and routine

Advertising feature produced by Globe Content Studio with Crest. The Globe’s editorial department was not involved.