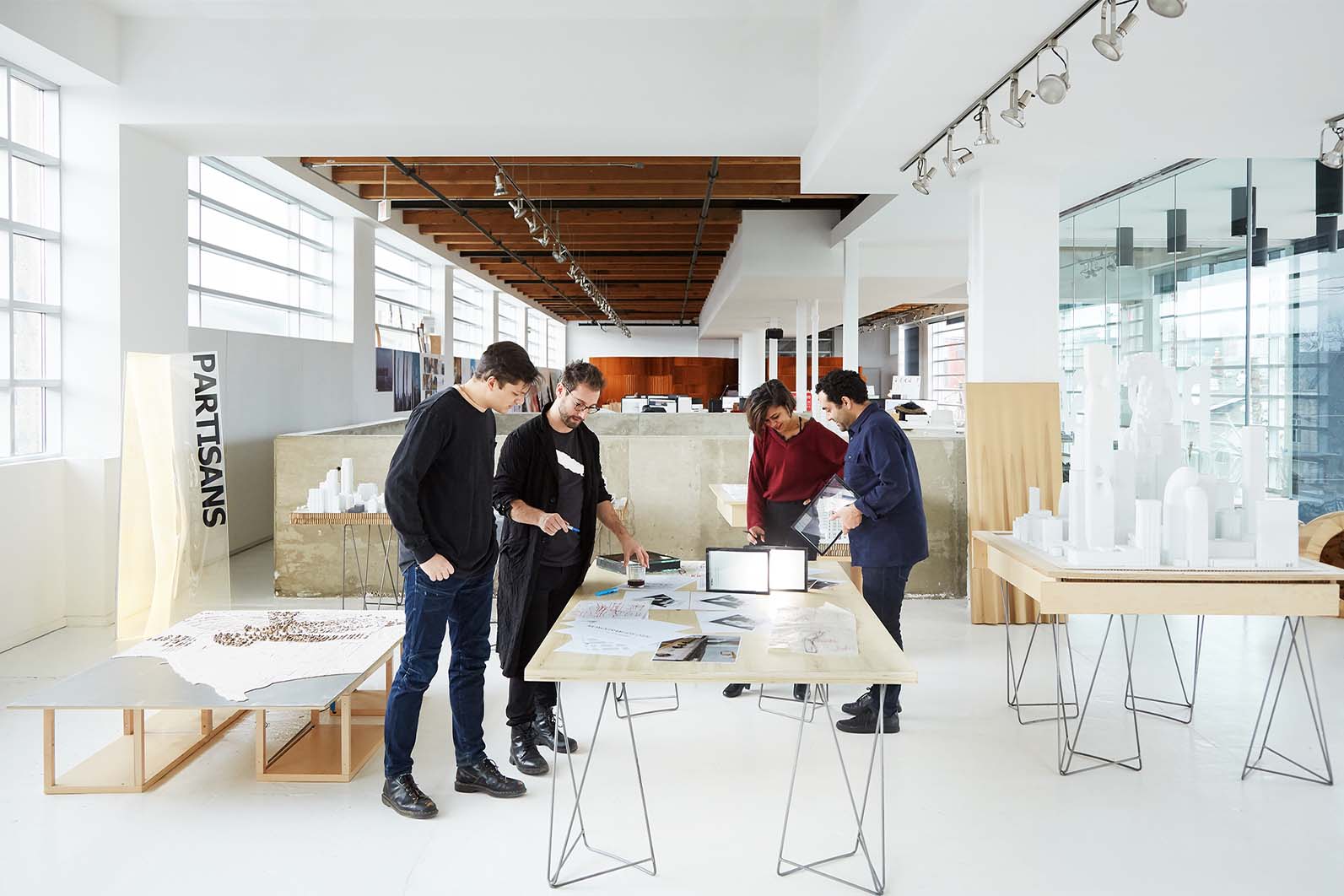 Like many ostensibly simple ideas, minimalism becomes ever more complex the closer you get to it. When we strip away all but the most essential elements of a design, it turns out, what we get isn’t less, but more. This is the kind of thinking that’s drawn artists and designers towards the aesthetic for decades, and continues to inspire new ideas in everything from fashion to interior design to appliances. Monogram’s new Minimalist Collection, a range of ultra-premium appliances characterized by sleek, streamlined exteriors, meticulously selected materials and luxury details, is one such creation.

“We offer the highest level of craftsmanship and precision engineering — it’s almost like having a professional kitchen brought into the home — and that’s what Monogram has been about for the last 30 years,” says Bob Park, the company’s chief brand officer. “With the redesigned collections, we didn’t want to get away from the foundational elements that people expect from Monogram, but we also wanted to make a bold mark on the future of kitchen design — one that truly exemplifies modern living.” When Monogram’s Minimalist Collection debuts at Toronto’s Interior Design Show from January 16 to 19 — part of a completely transformed product offering for Monogram in 2020 — it will mark the start of a new era for the brand, one that delivers the exceptional quality for which Monogram appliances are known while integrating seamlessly into any modern, architectural space.

We wanted to make a bold mark on the future of kitchen design — one that truly exemplifies modern living.”

Monogram’s 2020 product launch consists of two distinct lines, both defined by precisely machined metals and top-of-the-line build quality. The Minimalist Collection features streamlined design with glass cladding and smooth push-to-open doors, while the Statement Collection provides a more traditional option with its brass accents and substantial control knobs. Beneath their luxurious surfaces, however, the appliances also provide exceptional functionality. Featuring marine-grade ball bearings, sapphire glass and figure-eight drive trains borrowed from German sports cars, every aspect of these appliances has been crafted with the utmost attention to performance. “Both collections also incorporate high-performance technology,” explains Park, citing Google Home connectivity and interactive display screens, along with standout appliances like the newly updated 30-inch single wall oven and 30-inch Advantium speed oven, the latter of which allows users to cook a salmon fillet to perfection in just six minutes. “It comes down to a lot of little things,” he says. “For luxury, it’s the details that make the difference.”

As the focus of Monogram’s IDS 2020 presentation, the Minimalist Collection required a display booth that was as modern, sophisticated and disruptive as the appliances themselves, and this presented a unique challenge. How, after all, do you highlight something that’s designed to blend into the background? The answer, it turns out, is to partner with a design firm that specializes in out-of-the-box solutions.

Toronto-based design studio Partisans is known for audacious creations that infuse architectural concepts with new ideas. Under the credo “Beauty emerges when design misbehaves,” Partisans blends art with design, and pairs new technology with old-world craftsmanship, creating award-winning results. As the designer of the Monogram installation at IDS 2020, Partisans didn’t just come up with a unique way of displaying the Minimalist Collection to the fair’s tens of thousands of visitors, they entirely reimagined the experience of attending the show. 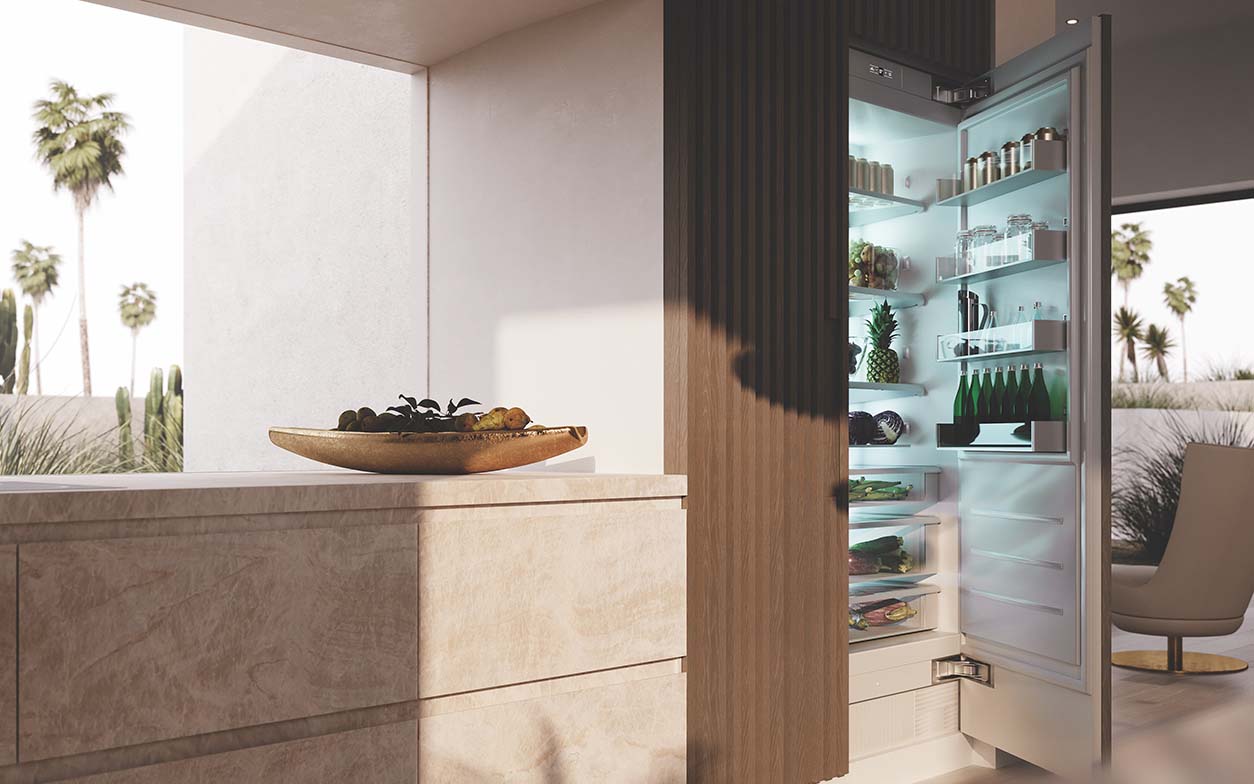 The Minimalist Collection integrates seamlessly into any modern, architectural space.

“I think what differentiates our studio is that we make opportunities in places where they don’t necessarily seem to exist,” says Alex Josephson, co-founder of Partisans, who created the Monogram IDS installation with fellow Partisans founding partner, Pooya Baktash. “For this project, the minimalist aspect of the appliances is translated into a critical approach to classic booth design, creating a play on the possibilities of what a trade show actually is.”

Rather than simply designing a beautiful modern kitchen in which to display the Monogram Minimalist Collection, Partisans chose to do the opposite, surrounding the appliances with high-quality glass from Agnora as stand-ins for counters, millwork and cabinetry. This provides not just a spectacular and unobstructed setting in which to admire the clean lines and high-grade materials of the Minimalist Collection, but a dramatic new take on the trade show booth experience as well.

“Minimalism is an aesthetic that’s trying to be seamlessly integrated in its context, whatever it is,” says Josephson, who drew inspiration for the project from modern artists like Damien Hirst, Antony Gormley and Donald Judd. “The design of the booth is a direct conversation with this idea of minimalism. It’s an abstraction of a kitchen. It’s trying to do much more with less.” 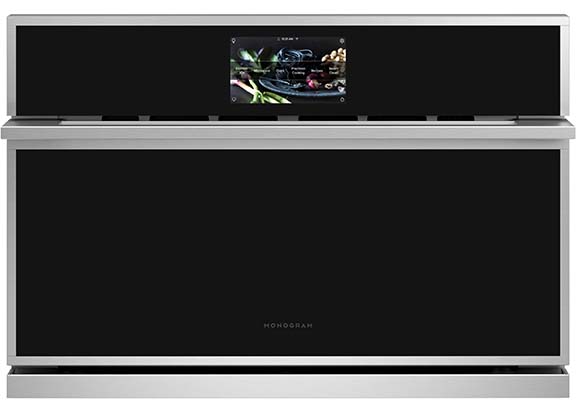 While these visually stunning intersecting glass planes succeed at emphasizing the pure design of the Minimalist Collection, Partisans took things a step further by adding an extra dimension of interactivity. Through an augmented reality program created by Toronto-based leading visual content design firm Norm Li, visitors can experience the Minimalist Collection’s other great strength: its versatility. Via a pair of interactive screens, the kitchen transforms instantly around the appliances to take on a variety of distinct modern styles and materials, from smooth tile and textured wood to clean white laminate and marble. “There are two booths — one is virtual and one is real,” co-designer Baktash says. “Instead of going with one aesthetic, you see the appliances abstracted from any environment or materials while you can also see them rendered virtually on the screen in various environments and materials.”

By pushing back against established assumptions about what a trade show booth can and should be, Partisans has done what they do best: they’ve created an entirely new method of representation. Like the Monogram Minimalist Collection itself — and like all great examples of minimalist design — it succeeds by eliminating the unnecessary and focusing on the essential. This may sound like a fairly simple equation, but as any student of minimalism knows, it’s anything but.

Monogram’s Minimalist and Statement Collections will be available for purchase starting in March, and will be on display at the Monogram Design Centre in Toronto (1290 Castlefield Ave).