From palaces to paella: How a Moorish ancestry has left its imprint on Seville

Hotel Alfonso XIII, a Marriott International property, was commissioned by King Alfonso XIII to host visiting dignitaries during the 1929 fair.

The Spanish city of Seville, renowned for its flamenco, its bitter oranges and as the setting of Rossiniʼs comic opera The Barber of Seville, has another, perhaps lesser-known claim to fame – its Berber history.

The Berbers and Arabs of northern Africa – known collectively as Moors – conquered Spain in the eighth century AD, and left a deep imprint found not only in Seville’s world-renowned architecture but also in its culture and cuisine. Today, visitors encounter it in everything from the city’s most iconic sites to the ceramic tiles adorning the elegant Hotel Alfonso XIII, a Luxury Collection Hotel, Seville, and traditional local dishes like saffron-infused paella.

“Many of them were craftspeople,” notes Adrian Shubert, a professor of Spanish history at Toronto’s York University. “As a result, a lot of the buildings built after the conquest, even if they were built primarily in the European style, incorporated many elements of Moorish architecture.” Those distinguishing characteristics include geometrical patterns, elaborate tile and brickwork, and the use of calligraphy as a form of decoration.

Seville is particularly rich in Mudejar architecture. While the Andalusian city boasts some notable remnants of the age of the Moors, it is primarily a showcase for the hybrids that evolved in the ensuing eras. 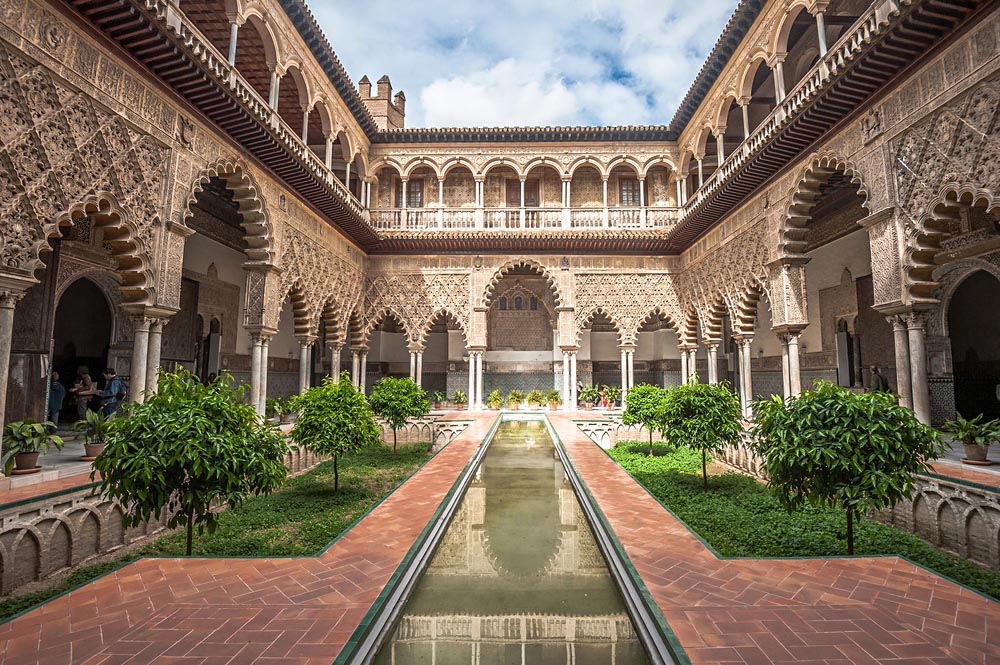 Built by Muslim artisans, the Real Alcazar is the most glorious example of Gothic-meets-Mudejar.

Courtesy of Tourist Office of Spain

Perhaps the most celebrated is the Real Alcazar, a UNESCO World Heritage Site. The complex began as a Muslim fortress in the 10th century, to be replaced in the 14th century by the Palacio del Ray Don Pedro, a palace for the Christian ruler Peter of Castile. Built by Muslim artisans, it’s the most glorious example of Gothic-meets-Mudejar. An enchanting maze of salons, courtyards and gardens, the Alcazar served as a backdrop in the classic film Lawrence of Arabia and, more recently, Game of Thrones.

Shubert also points to the Giralda, the landmark tower of the gothic Seville Cathedral. “It was originally a minaret for the mosque built on that site in the 12th century,” he says. “It was left standing after the Christian conquest.” Its exquisite brick façade was principally the work of Berber craftsman Ali al-Ghumari and has influenced modern structures worldwide.

In the 19th and 20th centuries, the Moorish look came back into vogue and spawned a neo-Mudejar movement. Some of its best-known works are in Seville’s Parque de Maria Luisa, including the Plaza de Espana and the Mudejar Pavilion (now home to the Museum of Arts and Popular Customs), both built for the Ibero-American Exposition of 1929. The Plaza is yet another hybrid, Shubert explains. “It mixes neo-Mudejar, Renaissance and art deco – it’s eclectic, shall we say.”

While in Seville, visitors can immerse themselves in neo-Mudejar style at the Hotel Alfonso XIII, a Marriott International property located near the Alcazar and cathedral in the city’s historic quarter. Commissioned by King Alfonso XIII to host visiting dignitaries during the 1929 fair, its elegant Moorish decor has since been enhanced by recent renovations. The hotel’s design replicates the classic Mudejar semicircular arches and slender columns, and its walls and ceilings are resplendent with azulejos, the signature glazed ceramic tiles originally produced by the Moors in medieval Seville. To get a great view of the hotel’s finer architectural details, guests can relax on a lounge chair next to the outdoor swimming pool or take photos from the pool restaurant – a casual spot for sipping craft cocktails or enjoying light nibbles, like prawn ceviche.

Immerse yourself in neo-Mudejar style at the Hotel Alfonso XIII, a Marriott International property located near the Alcazar and cathedral in the city’s historic quarter.

The Moors didn’t only leave a feast for the eyes. They also laid the foundation for classic Spanish cooking. “Being desert people, water was very important for them and they were very skilled at irrigation,” Shubert says. Among the heavily irrigated crops they introduced was rice, or arroz (just one of the many Spanish words derived from Arabic – another Moorish legacy). Spain’s favourite rice dish remains paella and it is a menu staple, with restaurants putting their own spin on the classic fare. Hotel Alfonso’s Restaurant Fernando serves an all-seafood paella, while its tapas bar Ena, helmed by chef Carles Abellan, offers a version with chicken and shrimp. In the summer, patrons of the property’s haute dining establishment can sit in the courtyard, complete with an elegant ivory fountain and soft lighting, which highlights the hotel’s ornate outer walls.

The Moors also brought with them almonds, artichokes and sugar cane, and an array of spices – cinnamon, cumin, nutmeg, saffron – that give Mediterranean fare its complex flavours. They created the forerunner to gazpacho – a cold soup called ajo blanco – and cultivated the famed Seville orange, the mainstay of British marmalade.

The Moorish influence doesn’t end there. “They also left their mark on the music of southern Spain,” Shubert says. Indeed, fiery, romantic flamenco, the iconic Andalusian folk music performed at many venues in Seville, is believed to trace its murky origins back to the Morisco, the Moors who converted to Christianity.

Chalk that up as just one of the many surprising ways that Spain’s African ancestors continue to make their presence felt in this historic, vibrant city.

Forget France, Champagne ‘runs in the veins’ of Newport Beach
→