Saint John City Market, which runs from Monday to Saturday of every week, is the oldest continuously operating farmer’s market in Canada.

The only urban centre on the Bay of Fundy, Saint John is a vibrant city in New Brunswick that combines the best parts of both metropolitan living and Maritime culture. With its ecologically diverse shoreline situated alongside an array of mom-and-pop shops, authentic food spots, and displays of local art, there are countless things to see in Saint John, and even more from which to draw inspiration. Here are six spots in the city that have inspired Toronto artists and are bound to inspire anyone with a creative mind.

This bustling farmersʼ market in the historic Uptown neighbourhood of Saint John is the oldest continuously operating one in Canada, with a charter dating from 1785. The market houses a range of vendors year-round selling fresh local produce, seafood, cheeses and other delicacies. Many of these suppliers have been running continuously at the Market for over a century, while others are bringing newer culinary innovations to the table – but all are well worth trying.

The farmers’ market is a great place to stop by for a taste of rich local ingredients that are essential to New Brunswick cuisine. After stocking up at the indoor market, do like they do in the Maritimes and pack a picnic to enjoy on any one of Saint John’s numerous public beaches. It’s an authentic New Brunswick dining experience that’s inspired artists from across the country, including Toronto-based street artist Uber5000 (Allan Ryan) who drew from these shoreside sights for his mural in Torontoʼs “Graffiti Alley,” a three-block laneway running parallel to Queen and Richmond Streets.

“We went to the market and got some lobster, and we cooked them on the beach over a bonfire, with this boiling pot of water, and the sound of the shore kind of lapping in, that’s something I’ll never forget,” Uber5000 says. “Those memories kind of come flooding back in when you’re painting the water and painting the pier.” 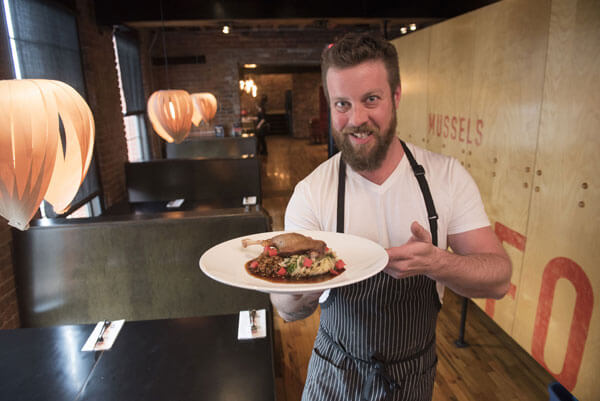 Headed up by former Top Chef Canada contestant and New Brunswick local Jesse Vergen, Saint John Alehouse is a town favourite, known for its experimental cooking and use of locally sourced seasonal ingredients. Swing by the unpretentious Uptown spot for unique spins on Maritimes classics and a wide array of local beers and wines. Saint John Alehouse is a must visit for anyone looking to eat like a local, in style.

Saint John wouldn’t be what it is without its collection of public art installations, including sculptures and murals, throughout the city.

Among those on display is local painter Deanna Musgrave’s Nest, a mural decorating the ceiling of a highly trafficked pedestrian walkway in the heart of Uptown. Musgrave’s mural was designed to envelop pedestrians in blue, incorporating images of the region’s diverse birds, natural landscape and history.

Another must-see is John Hooper’s People Waiting, a series of statues centrally located on Saint John’s King Street. The stoic wooden sculptures, which were crafted in 1977 but placed in their current location a little over a decade ago, depict everyday people sitting on benches, reading newspapers and embracing one another.

Sculpture-lovers should also keep an eye out for the Salmon Run installations, a series of 20 colourful salmon models, identical in size and shape, decorated by an array of local artists and placed in prominent locations around the city. While each of the statues is painted with a different design, they all depict the natural beauty of the fish species, which is plentiful in the Saint John River.

Musgrave and the artists behind Salmon Run are not alone in drawing inspiration for her art from Saint John’s wildlife; Toronto-based muralist Andrea Manica also used her memories of the region’s native fauna when designing a recent mural in Torontoʼs Leslieville neighbourhood. 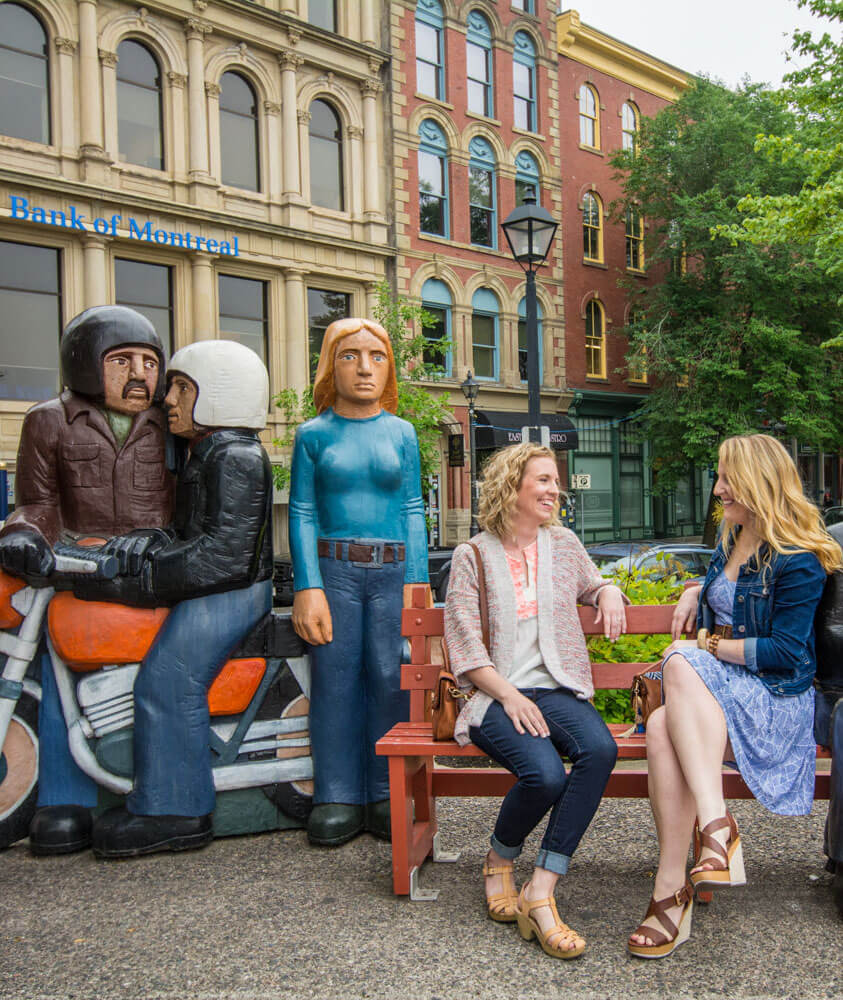 The stoic wooden sculptures of People Waiting are just one of many noteworthy public art installations throughout Saint John.

This beloved gallery, currently curated by award-winning gallerist Shannon Buckland, showcases talent from across the region in a range of media. The Buckland Merrifield Gallery, in the heart of Uptown, prides itself on representing Canadian fine crafts and art – including work from over 70 mid-career New Brunswick artists. So, it’s no wonder artists from across the country, such as the Toronto-based street artist Alex Bacon, have stopped in to take notes and get in touch with their Canadian roots.

“I’m a real proud Canadian,” says Bacon, who used his experiences in Saint John to inspire his Chinatown, Toronto mural. “I’ve travelled across the entire country, and what we have in our own back yard – I love going out there.” 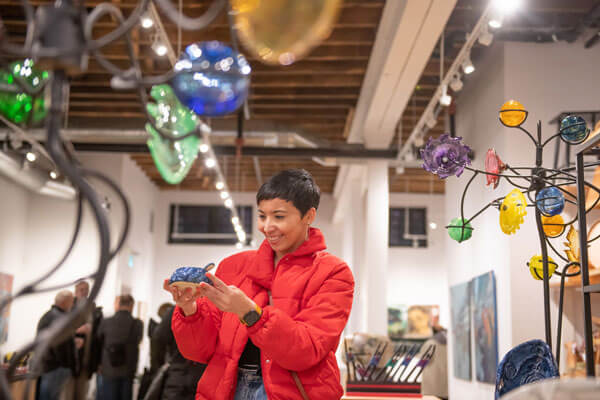 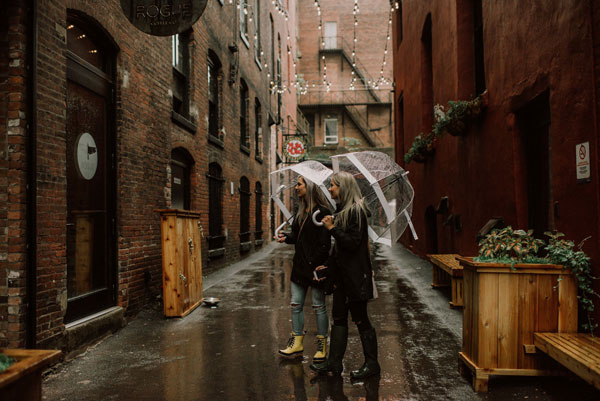 One of the newer additions to the trendy Grannan Street, Rogue Coffee is the only cafe in the Maritimes to use a modbar brewing system.

Sandwiched between industrial red-brick buildings, decorated with trendy hanging lights, this two-block stretch of Uptown is an up-and-coming area for shopping and socializing. Grannan Street is home to the cherished Rogue Coffee the “coolest alley in Atlantic Canada”), and the only cafe in the Maritimes to employ a Modbar brewing system for churning out its drinks.

Also situated on Grannan Street are record store and microbrewery Five & Dime and homemade ice cream shop Bella’s . During the summer months, stop by the alley for high-octane events such as the Moonlight Bazaar, a nighttime street fair with vendors, DJs, and food, or the Area 506 music festival, the best of its kind in Saint John. Its walkability and unique location along the Bay of Fundy, is part of what gives Saint John its distinctive coastal vibe, Uber5000 says. “I kind of feel like it would be a really cool place to live.”

Said to be one of the best record stores in Canada, Backstreet Records has been serving the Saint John area new and used vinyl, CDs, tapes and DVDs since 1980. Thirty-six years after opening in Saint Johnʼs Uptown neighbourhood, Backstreet still hews to its original design: ornate wrought-iron grills decorate the windows and vintage posters of famous Canadians like Buffy Sainte-Marie line the walls. The shop offers a distinctive look at Canadian music culture of past and present; a portion of the collection at the Princess Street shop is rare, and much of it is devoted to local talent. It’s one of many long-lasting small businesses that have built Saint John into what it is today – an eclectic city with creativity and inspiration at every turn. 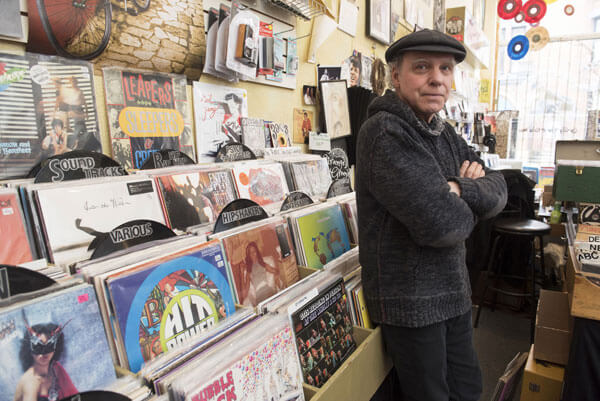 Since 1980, Backstreet Records has been serving Canadian music culture of past and present to uptown Saint John

Advertising produced by the Globe Content Studio.
The Globe's Editorial department was not involved.