When it comes to food, travelers to Hong Kong are spoiled for choices

Hong Kong enjoys a unique duality when it comes to its restaurant scene.

As one would expect, typically Chinese options abound, ranging from modest street-stall egg tarts to Michelin-level-calibre dim sum featuring dishes such as barbeque pork buns, curried cuttlefish and shrimp siu mai (pork dumplings). But the city’s past as a British colony and major port has also helped to encourage the crème de la crème of international cuisine. The result is traditional Chinese eats and Western-influenced dishes co-existing in a hyper-competitive restaurant scene.

We spoke to two different Hong Kong-based chefs to discover how two restaurants with very different backgrounds leave their mark on the city.

Owner of Tim Ho Wan, a one Michelin-starred restaurant and brand

Location 9-11 Fuk Wing St, Sham Shui Po (along with 46 other locations in Hong Kong and worldwide)

How did you start Tim Ho Wan?

I started cooking in a diner at 15, learning from the ground up. At 19 I became the head of the dim sum section. I worked for 30 years as a chef at other people’s restaurants, and then at 47 finally opened up my first Tim Ho Wan location. It was a gamble. Before this I worked for three years at the Four Seasons Hotel [in Hong Kong] at the Lung King Heen restaurant. It came in stages. After I wasn’t a new chef anymore, I progressed up through better and better restaurants until I was a chef at the hotel. After hotels there wasn’t anywhere higher to go. So I started my own restaurant.

You and your business partner started this restaurant in 2009, and in the decade you’ve been open, you’ve never lost your Michelin star and you’ve remained the most affordable Michelin-starred restaurant in Hong Kong. How do you keep prices down and the quality high?

Making dim sum, our highest costs are labour. The ingredients are simple and actually aren’t that expensive. If wages and rent go up, then we’ll cross that road. But right now the pressure to raise prices isn’t very high.

Yes, it’s really cheap. But our thinking is that we should focus on selling more and doing more business. Even if we make less profit [per item], if we sell more it’s the same.

If we raised the prices, our clientele would change … We want more people to be able to patron the restaurant. When more people come to the restaurant, the food is also better as a result. Turnover is high and things come out quickly, so things are always fresh. If it’s expensive, we might only have a hundred or so customers per day, so the food we create might have to be stored in fridges or freezers. 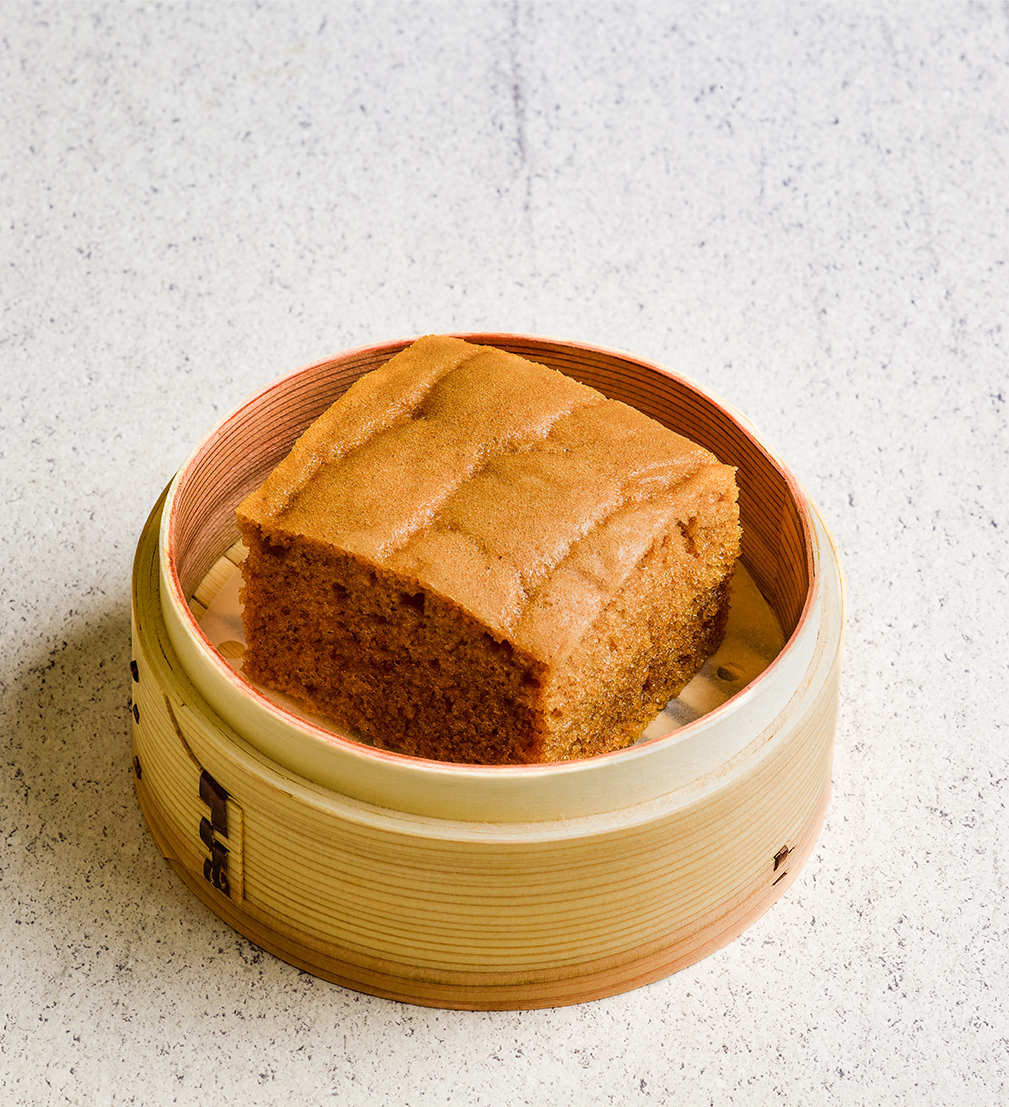 What’s the hardest dish that you make?

The egg sponge cake. The dish is sensitive to temperature and humidity. Humidity will effect its ability to Faat How. Like yesterday was really warm – 30 degrees. But today is only 23 degrees – so today is worse. So it really depends on how the chef keeps the cake warm. Without that attention to the temperature of the environment, you can’t make it well.

Your pig liver siu mai is a unique dish. Tell me about it.

In Hong Kong, I can only think of three or four restaurants that still sell it. It’s a very old-fashioned dish. Making it well is not that easy - it’s difficult to make sure the liver is cooked just enough to be done but not overdone so it tastes like rubber. 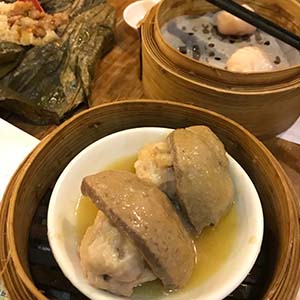 Finding the best liver for the dish also isn’t that easy. It can’t be old … What I mean by that is that the pig should be about 200 catty (2 catty is equal to 1kg). The ones that are 3-400 catty are no good. Once it’s higher than 300 catty, the liver becomes too tough. And the pig can’t be too young either. Too young and the liver doesn’t have much flavour. What’s the hardest part about this job?

This interview has been translated and condensed.

Pop over to Kung Wo Beancurd Factory for a snack of silky-smooth tofu pudding, fried tofu and homemade soy milk. Don’t forget to add some raw cane sugar on top.

Stop by for a bowl of traditional claypot rice, topped with pork spare ribs, soy sauce and an egg. Don’t forget to scratch to the bottom for the burnt, crispy rice at the bottom of the pot – a signature feature of the dish.

Sing Kee’s hero dish is its mouthwatering deep-friend abalone, which somehow manages to be both crispy and unbelievably tender at the same time. Come for fresh seafood caught straight from the ocean next door.

Why did you want to become a chef?

Nobody in my family was a chef or worked in the restaurant industry. Ever since I was small I liked to watch my mom or grandmother cook. I honestly didn’t know anything. I applied to culinary school. At 14 I thought this could really be right for me. When I was 15 I started working at a pizza restaurant. At 16 years old I joined a 2 Michelin star restaurant as a dishwasher. On my first day I thought that it was crazy. Chaotic. Everybody was focused on what they were doing. There was energy.

I’ve been in in Hong Kong four years now. For the first three years I was at a hotel called The Upper House. That’s when I started mixing Asian flavours into my dishes.

How would you describe the food at Arbor?

All of the ingredients are mainly from Japan, but there is some Nordic inspiration, because I'm from Finland. Normally in the Scandinavia we eat dark bread, salmon or some raw seafood on top. You'll have some dill, some fennel, some pickled cucumbers, some lemon. So similar combination, but Japanese ingredients. 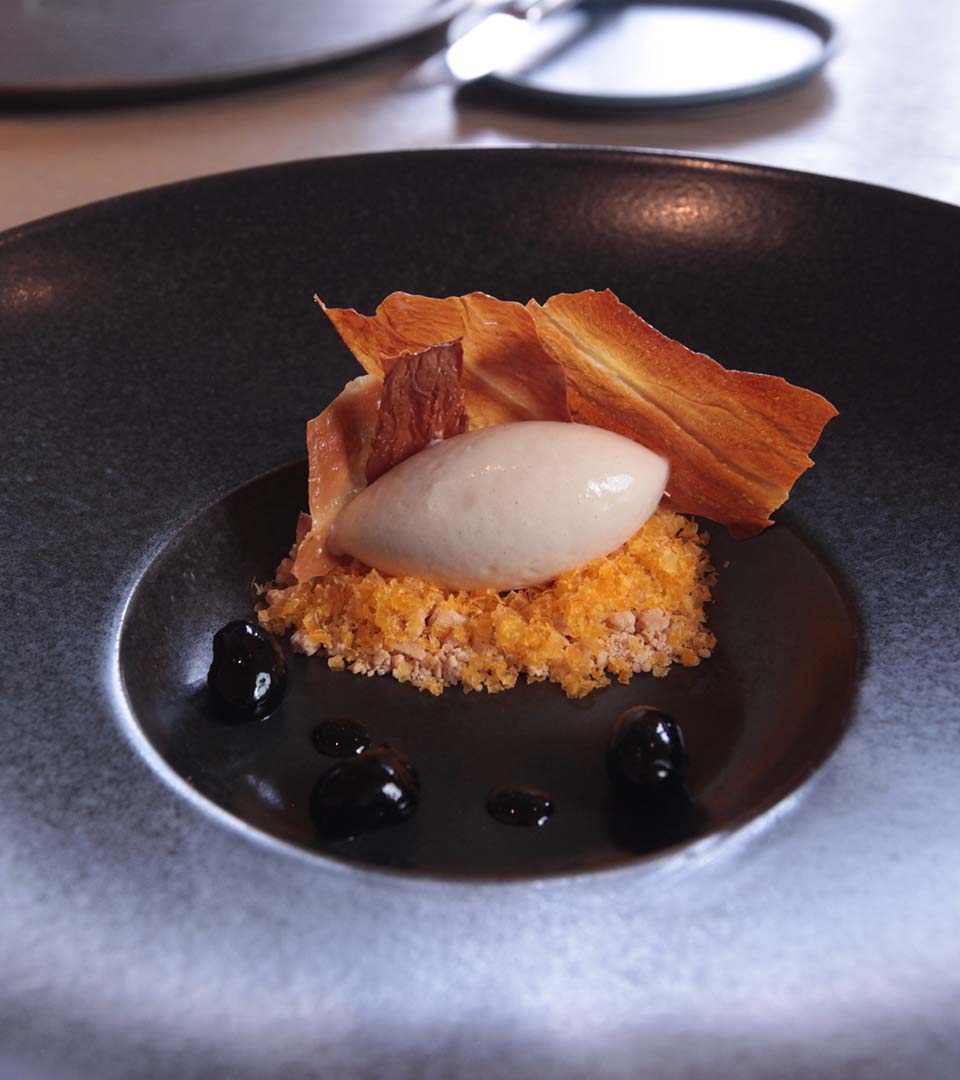 Tell me about this dessert.

We have the ice cream made of fresh soymilk and soft tofu and underneath there's some white chocolate, some salted duck egg. On the side is the candied black soy beans incorporated with soy sauce and some dark sugar from Okinawa. On the top is crispy bean curd called Uba and it's baked with honey and butter. I think this dessert is a good explanation of our style. French techniques, Japanese products. It's basically like the salted caramel dessert in a French restaurant, but all products from Japan.

Do you find that mixing French cooking with Asian flavours comes naturally?

Yes. I just love it. I love learning more. The long story for the dessert is like five, six years before, my wife showed me black soy beans. That was in Finland and when I tasted them I was like wow – there’s something really interesting here that I’ve never tasted before.

How do you source your ingredients?

Everything is seasonal. Mainly from Japan, but also Europe and local organic farms. I like Japan for the quality. Even if it’s something as simple as sweet corn. Once you taste it, the texture, the flavour is just a different level. I always have to keep searching for ingredients. I call all the farms and the markets and meet the right people … I think with the Japanese you need to just build the connections. Once they trust you then they also give more selection. I actually think it’s really fun to work like this because it’s never stable. it’s always seasonal. On any day the market can say they don’t have any fish or not a certain kind of fish. And then I have to do something else.

Do you feel pressure to keep up with the restaurant scene in Hong Kong?

It's pressure but in a good way. I think that you need that and that's why I like the Hong Kong food scene. There's lots of speed, pressure because the competition is high, It's not just about the Michelin star. You need to learn and learn and keep being and better. Otherwise if you stop here then next year you're bye bye.

What’s the next step?

I’m working to make the business stable. Make customers happy. I want more customers from outside of Hong Kong. Of course Hong Kong customers are great – they know a lot about food. But for me, it would be great to have more of a mix of customers, like tourists. It’s more fun.

This interview has been translated and condensed.

Enjoy expertly-crafted cocktails and snacks in a this cosy bar decorated to look like an iron forge. Notice all the small décor details – and please don’t steal a fairy.

Try traditionally Cantonese dishes made from top-quality ingredients in a Western-influenced restaurant-gallery featuring a lush patio and elegant dining salon.

Don’t let the no-reservation policy and the long lines scare you – this Thai noodle restaurant is worth the wait.

Plan your next culinary adventure in Hong Kong

From October 31,2019 - November 3, 2019, The Hong Kong Tourism Board invites you to experience the 2019 CCB Wine & Dine Festival, featuring world-class food, drinks and entertainment under the backdrop of the stunning Victoria Harbour skyline. Register at the link to receive free admission to the event. The pass is valued at $30 Canadian.

How to shop in Hong Kong like a local
→

Where to get the best views of Hong Kong
→