'Boys will be boys."

It's a classic refrain sputtered by exasperated teachers.

But the phrase has taken on new meaning as a growing number of educators say, "Let them."

The boys leadership academy would be optional and start at kindergarten to Grade 3, adding grades each successive year.

It's the latest attempt in the public system to create separate learning environments where boys don't have to sit still and raise their hands, where they're encouraged to be competitive, and where they're free from the presence of girls who are increasingly outperforming them in class.

As statistics continue to show that boys suffer in the school system while girls thrive, experts say separating genders into different schools could be the way of the future.

"It'll be transformational for the kids who reach that school," says Brad Adams, the Toronto-based executive director of the International Boy's School Coalition.

Public elementary boys' schools have been long established in the rest of the world, he says, citing examples in Australia, New Zealand, South Africa and Britain. Many successful public boys' schools have cropped up in the United States in recent years.

"[The all girls environment]gives them the opportunity to mature, to become leaders, to discover who they really are without the distractions of boys," says Holy Angels principal Theresa MacKenzie.

All-boys' schools offer the same safe place to build character and concentration, Mr. Adams says. "A boys' school is an achievement culture, and keeps it clearly in focus in a way that sometimes a co-ed school doesn't do as well."

But some question the validity of the boy-girl split. Annie Kidder, the executive director of People for Education, a parent-led advocacy group, has seen co-ed classes where students run around in the morning, rain or shine, before settling down for lessons. The active learning approach benefits both boys and girls, she says. "Maybe we should be taking some lessons from boys - that they know some secrets here, that this is a good thing."

Schools may also be more comfortable splitting genders by classroom rather than segregating the schoolyards. Of the 545 known American schools that offer single-sex education, only 91 count as single-sex schools.

Doug Trimble, principal of Cecil B. Stirling School in Hamilton, Ont., which, for seven years, has run single-sex classes in grades 6 through 8, says having boys and girls eat lunch together is just as important as having them learn in classrooms apart.

But proponents of single-sex schools point to the success of private schools as educational models. The main challenge, they suggest, is changing attitudes to how public education should be offered. "The kind of established viewpoint has been that co-education is normal and normative and single-gender education isn't," he says. "It's been highly ideologically charged."

Some single-sex schools have faltered because they reinforce gender stereotypes, says Leonard Sax, a physician and director of the U.S.-based National Association for Single Sex Public Education. Some switch to all-boys schools without proper training, with disastrous results.

"If you simply put all the boys in one room and one building and you put in teachers who have no preparation as to how to lead a boy's classroom, the boys will start throwing things and the teachers will be dismayed," he says.

Like Africentric schools, aboriginal schools and even French immersion, boys-only schooling will take hold because it's acknowledging different educational needs, says Larry Swartz, who teaches at the Ontario Institute for Studies in Education at the University of Toronto.

"I don't think it's going to be fast," he says. "I think they're going to pay attention to a) the community, b) the needs, but always looking to some research that will guide them."

Single-sex education is built on the idea that boys and girls learn differently. While the concept has its contenders, research has shown boys tend to be more active learners than girls.

"Boys need to move, girls have the ability to sit still and work," says principal Doug Trimble of Cecil B. Stirling school in Hamilton.

Boys thrive on team competition and relish a battle against a buddy, while girls would rather be on the same team, says Leonard Sax, director of the National Association for Single Sex Public Education (he recalls a Scottish high school that had boys write competing newspaper fronts reporting the death of Romeo and Juliet).

Girls tend to look at their teacher as a friend or ally, while boys don't. Girls also tend to appreciate context, while boys are bored by it, Dr. Sax says.

While girls can wait a day or two for feedback, boys tend to need it right away, Mr. Trimble says.

"When it comes to completing the task, girls like to see beginning, middle and the end," Mr. Trimble says. "Boys just want to get started."

Do you agree with single-sex education? Join Chris Spence for an online discussion on this page Thursday at 5 p.m. ET

Editor's Note: globeandmail.com editors will read and allow or reject each question/comment. Comments/questions may be edited for length or clarity. We will not publish questions/comments that include personal attacks on participants in these discussions, that make false or unsubstantiated allegations, that purport to quote people or reports where the purported quote or fact cannot be easily verified, or questions/comments that include vulgar language or libellous statements. Preference will be given to readers who submit questions/comments using their full name and home town, rather than a pseudonym. 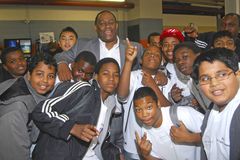 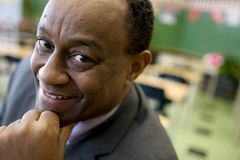 McGuinty backs boys-only public school
October 21, 2009
Follow us on Twitter @globeandmail Opens in a new window
Report an error
Due to technical reasons, we have temporarily removed commenting from our articles. We hope to have this fixed soon. Thank you for your patience. If you are looking to give feedback on our new site, please send it along to feedback@globeandmail.com. If you want to write a letter to the editor, please forward to letters@globeandmail.com.
Comments