For the past two summers, Diego Felix, one of the most well-regarded chefs in Buenos Aires, has lived by a very simple motto: Have knives, will travel.

And he wants you to invite him over for dinner.

On Tuesday, Mr. Felix, whose Argentine restaurant, Casa Felix, made Travel + Leisure magazine's top-10 list of the best secret dining clubs in the world and has also won praise from the Washington Post, London Times and New York Times magazine, wrapped up the Canadian leg of his second North American tour. The trip has him leaving Toronto for New York, Chicago, San Francisco, San Diego and Austin, Tex., cooking in people's homes for groups of anywhere from eight to 15 people.

Mr. Felix and his fiancée Sanra, who helped organize the tour, will spend one to two weeks in each city. Together they will prepare and serve as many as eight meals at each stop.

Mr. Felix has made it a priority to use South American techniques and recipes to cook local and indigenous products of each region he visits, acting as a catalyst of both culinary and cultural diffusion. But his true aim in cooking for people on the tour, he says, is a humble one. "I want them to leave drunk," he said before leaving Toronto.

When someone has tippled a bit too much, explains Mr. Felix, it is proof they have relaxed and allowed themselves to indulge not only in the Argentine wine he's brought to dinner, but also too the conversation at the table and the easy-going intimacy Mr. Felix hopes to create at each meal.

Establishing a relaxed atmosphere for diners has always been Mr. Felix's forte. After working in several fine-dining restaurants in San Francisco - the home town of Mr. Felix's fiancée - Mr. Felix and Sanra moved back to Buenos Aires and opened Casa Felix in 2006.

The 15-seat restaurant doubles as their home. Mr. Felix says he prefers to call it a "chef house" rather than a restaurant. "It's my house and I'm a chef and people come to eat," he says matter-of-factly.

The idea for the North American tour was something of an accident. A man from New York was enjoying his meal - and his wine - at Casa Felix when he called out to Mr. Felix: "You should come to my house some time and cook for me and my friends."

"In two seconds we were like, 'We can do that,'" recalls Mr. Felix.

Within days the two began sending out e-mails to friends from around the world who have passed through Casa Felix, asking if anyone else would be interested in having Mr. Felix cook dinner for them."We don't do it as a business idea," says Mr. Felix. "We prefer to have friends."

The response was so great that Mr. Felix set a limit of eight dinners per city, booked on what he says was a "first call, first booked" basis.

Last summer, the North American tour saw Mr. Felix in New York, San Diego, San Francisco and Los Angeles. He added Toronto, he says, for a simple reason. "A lot of people from Toronto came to our place," he says.

Diners in each city receive a four-course tasting menu and bottomless glass of wine for $95. Mr. Felix creates the menu for each city after spending a day or two in local markets and meeting with regional farmers and fishmongers.

In Toronto, diners were welcomed with a caipirinha, a Brazilian cocktail, mixed with wild foraged saskatoon berries. The delicious drink was used to wash down hors d'oeuvre of portobello mushroom and pumpkin-seed saltena, a type of empanada. From there, the menu moved on to an appetizer of corn humita with wild leek and cattail hearts, spinach and arugula salad with cloudberry viniagretta.

To cleanse the palette, a pear granita with pomegranate intermezzo was served. The main course consisted of a Canadian wild rice and lima bean tacu-tacu, a staple of Peruvian cuisine. Adding local flair to the dish, Mr. Felix served it with Georgian Bay whitefish (instead of steak), tomato-and-orange spring broth, and a sprout salad. Dessert consisted of quinoa and berry tart with ambrosia sauce.

Diners in Toronto - who, like those in the tour's other cities, had to book three months in advance - were thrilled to have Mr. Felix cooking for them in the comfort of their homes.

Ashleigh Dempster and Amanda Blakley, co-founders of The Society, a Toronto social club, met Mr. Felix last year during a visit to Buenos Aires. When they learned he was planning to add Toronto to his tour, they jumped at the opportunity to have him cook for some of the club's members.

"If you ask anyone that was with us, the best dinner on the trip was Casa Felix because it was so intimate and so different," says Ms. Dempster.

After confirming with Mr. Felix, Ms. Dempster and Ms. Blakley put out word of the dinner to members of their club. "It was fully booked in 20 minutes," says Ms. Blakley.

Mr. Felix says he is open to adding more Canadian cities to his tour next year. Montreal seems to be the most likely candidate, he says, considering that he and Sanra host so many visitors from the city at Casa Felix. Of course, as with most of what they do, nothing of next year's tour is carved in stone. The pair would rather enjoy the freedom of the unexpected and a relaxed approach to whatever they do.

As Mr. Felix explains, "We just send out e-mails: 'Who wants some dinners?'" 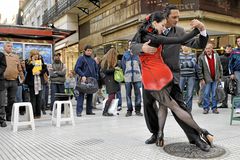