As an international student arriving at Carleton University in Ottawa in the fall of 2016, Giovana Link knew she would have to confront the reality that she was a long way from her hometown of Porto Alegre, Brazil.

That distance, combined with the culture shock of moving to Canada, as well as the language barrier she encountered in the nation’s capital, all contributed to the feeling of being overwhelmed.

But she had expected it to be hard and was determined to overcome the obstacles she was facing. Luckily, Carleton had recently begun to pilot its canine therapy program, giving students the opportunity to spend time with a dog named Blue.

“When I first went to Blue I thought it was going to be a one- or two-time thing – maybe I just missed my dog and that was all I needed,” Ms. Link says. “But it turned out to be totally different.”

Ms. Link, who studies neuroscience and mental health, ended up visiting with Blue every week through to the last day of that semester, and still does to this day, with the program having now grown to about seven dogs in total.

The benefits for Ms. Link were numerous, and began the moment she started to hang out with the six-year-old Great-Dane/Pointer mix.

“During the time that I am with him … I can forget that I am so far from home, that I miss my family and friends or that I am having a really hard time with classes,” she adds. “It is the true moment that I don’t worry about things.”

Shannon Noonan, special project officer for the office of the vice-president and Blue’s owner, used to work in one of Carleton’s student residences and would bring her dog with her to work. After doing some evaluations of student interactions with her dog, she was approached by the centre for initiatives in education to run the pilot program.

“There’s some research with Canadian universities that shows that [canine therapy] helps with [student] retention in a way, that they help with community atmosphere and sort of a connection to the university and feeling like a sense of home,” she says.

One of the main researchers in this area is John-Tyler Binfet, an associate professor in the faculty of education at the University of British Columbia, who established the Building Academic Retention Through K9’s (B.A.R.K.) at the school’s Okanagan campus.

Mr. Binfet co-authored a paper a year ago looking at reducing university students’ stress through a drop-in canine-therapy program. With students facing such stressors as transitioning from home, increased academic expectations, time management challenges, new social demands and sleep deprivation, the study had 1,960 participants from UBC.

Measured over three semesters during 2014 and 2015, students spent an average of 35 minutes with a dog at the sessions, usually in a 3:1 or 4:1 ratio, which were offered six or seven times each semester. By using both a pre- and post-interaction stress test, the survey showed that, on average, stress levels dropped by more than 50 per cent.

But while that was positive feedback that the B.A.R.K. program was working, Mr. Binfet says it is the peer support that the sessions generate that carries some of the most lasting rewards.

“What I see is the students getting supported because students who have microcommunities of support navigate all those challenges [that students face],” he says. “… They don’t need a ton of new friends, but they need a small group who are looking out for them.”

UBC operates a drop-in program on Friday afternoons and has a pool of 55 or so dogs that it draws from, using 15 to 17 dogs a session.

Since implementing the program seven years ago, Mr. Binfet says the results were surprising because they went beyond the original intent of reducing stress to help students focus better on learning.

“Anecdotally, we hear two things,” he says. “[One], they only chose UBC Okanagan because of the dog program … and the other one is I hear from kids who say, ‘I only stayed this semester because of those dogs, they’re the ones that kept me there.’”

Canine-therapy programs are one of many mental-health services available to students, and they help cut down on long lines at student support services for those looking to see a counsellor, Mr. Binfet says.

At Carleton, the university put together its second mental health framework two years ago, says Michelle Baulch, assistant manager of student success and advising. One of the school’s goals was meeting a variety of student mental-health support needs.

“A lot of students, they may not get what they need from … face-to-face counsel,” she says of the more traditional approach to tackling mental health. “We know that not all students want that kind of support, so we really needed to make sure that we had other kinds of support in place.”

A therapy-dog program can sometimes be a pathway that leads to a deeper discussion with students who have initial hesitations talking to someone about their mental-health challenges.

“If a student is struggling with something much bigger, the handlers for the dogs are trained,” Ms. Baulch says. “So they can help connect students to services that may be more crucial for them at that time. So it’s a door for many students.”

The University of Western Ontario in London, Ont., has been bringing in dogs from various community services to interact with students for the past 17 years. The visits, which occur weekly in health services, and also in the residences at least twice a year, often prove so busy that students requesting to spend time with the dogs have to be turned down.

Jenny Hauser, the assistant co-ordinator for the therapy dog program at St. John Ambulance in London, which holds the sessions at Western, says that dog visits can do a lot for those who are feeling anxious or overwhelmed. She adds that for those who doubt what a few minutes of petting a dog can do to stress levels, there is scientific research that a person’s blood pressure can drop by up to 10 points after just a few minutes of human-canine contact.

It brings a sense of mindfulness and being present with one’s thoughts, allowing for a shift in perception on how the rest of the day will go.

“So you sort of get out of your head,” she says. “You have a little pet break and those feel-good chemicals, the serotonin, dopamine in your brain, start to flood out into your body and then you leave there usually in a little better shape than when you came in.”​

All eyes and ears, mini donkeys offer comfort to kids in therapy
January 2, 2019 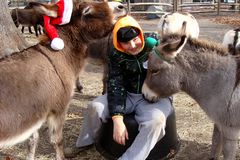 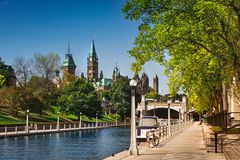