The healing power of sound

Tamara Goldsby was shopping in an outdoor market in California 10 years ago when she saw a man from Nepal moving a wooden mallet around the rim of “some strange metal bowls,” producing a beautiful, clear sound.

“I felt this vibration and thought ‘Wow’,” says Goldsby, now a research psychologist in integrative health at the University of California San Diego.

What Goldsby experienced was the powerful sound of Tibetan singing bowls, used for centuries to produce low frequency sounds that calm the nervous system. Intrigued, she attended some sessions where the bowls were played, eliciting feelings of calm and relaxation. 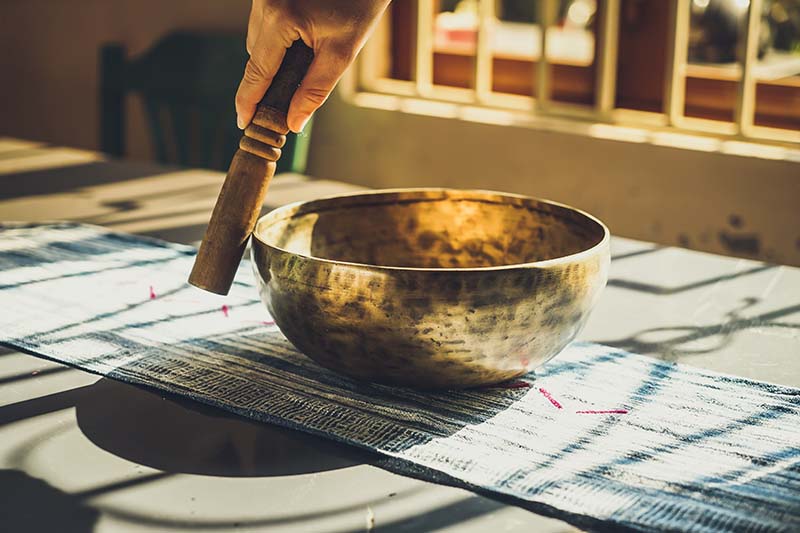 Tibetan singing bowls have been used for centuries to produce low frequency sounds that calm the nervous system.

Years later, Goldsby decided to study the impact of sound bowls on human health. Her 2016 study published in the Journal of Evidence-Based Complementary and Alternative Medicine, found that people attending singing-bowl meditations or sound baths reported a reduction in pain symptoms as well as less anxiety, tension, anger and feelings of sadness.

“We saw some very exciting results,” says Goldsby. “Everyone had reduced tension. And people who were new to the sessions had tension that was three times less than before experiencing the meditation bowls.”

Goldsby is a fervent believer in the power of sound to improve not only mood but also physical symptoms such as chronic pain. Numerous global studies show people regularly exposed to particular sounds at certain frequencies report lower stress levels, improved healing and a decrease in the physical pain.

Lee Bartel has explored these effects extensively, from the impact of sound medicine on patients with Alzheimer’s disease to those suffering from the muscle pain and fatigue of fibromyalgia.

A professor emeritus at the University of Toronto’s Faculty of Music, Bartel has conducted studies about the impact of vibroacoustic treatment, in which a person is exposed to a sound frequency of 40Hz, which is felt as a vibration.

During the treatment, a person uses a device called the Sound Oasis Vibroacoustic Therapy System that generates vibrations and plays music while they are sitting on it or lying down.

In one study of Alzheimer’s patients, researchers administered the non-invasive treatment in 30-minute sessions two times a week for three weeks. They found that when they assessed participants’ mental skills through cognitive testing, their scores went up 13 per cent.

Bartel has several theories about how sound heals the body. He believes that when a person has a disease that is caused by brain dysregulation, such as Alzheimer’s, brain circuits become dormant. Sound stimulates the neurons in the brain, strengthening these pathways. “When we reregulate those neural circuits, those conditions go away,” he says.

Bartel has also studied fibromyalgia patients, who suffer from widespread musculoskeletal pain, as well as memory issues, fatigue and mood problems. When exposed to vibroacoustic therapy, a significant number of participants reported less pain, leading him to theorize that fibromyalgia may be caused by brain dysregulation. He also studied patients with depression and noticed their moods improved as did their reaction times. (People with depression often process information more slowly than those who aren’t).

What’s most appealing about sound therapy, Bartel says, is that it’s low cost and can be administered almost anywhere. Sound therapy also doesn’t have the failure rates or side effects of medications.

“It is something that people can do easily,” he says. “In the future, if we continue to see positive results, the medical community may start prescribing it.”

Getting buy-in from the medical community is still far off, says Heidi Ahonen, a professor of music therapy at Wilfrid Laurier University in Waterloo, Ont.

However, Ahonen points to the ongoing research showing that sound therapy has positive effects on the mind and body. She’s set to launch a study this fall exploring the value of low-frequency sound therapy on children with cerebral palsy. The researchers in her study theorize that sound may help with the muscle spasticity experienced by children with this condition.

“We need to measure what’s happening in the brain,” Ahonen says. “Though we’ve seen some wonderful changes that may be because of [cortical activity] there is no way for us to prove this is that case.”

She’s already convinced it works, after administering low-frequency vibrations to an elderly woman with advanced Alzheimer’s.

“Her husband came to visit while she was sitting on the chair (and receiving treatment),” Ahonen recalls. “He was crying and he told me that it was the first time his wife had recognized him in several years. They were able to have a conversation.”

It’s experiences like these that inspire Ahonen to forge ahead with her sound research. “I know there’s something there,” she says.