The timing couldn’t have been better in so many ways for Nelly Korda, the new face of American women in golf and No. 1 in the world.

As she stood on the first tee at Atlanta Athletic Cub, tied for the lead in the KPMG Women’s PGA Championship with a shot at winning her first major, older sister Jessica had just finished the front nine and made a detour on the way to No. 10.

The sisters, separated by about five years, shared a hug.

The next embrace was even more meaningful, some 4½ hours later on the 18th green after 22-year-old Nelly closed out a three-shot victory that made her the first American in seven years to reach the top of the women’s world ranking.

“She has a heart of gold,” Nelly said. “She’s the most selfless person out there. She’s five years older, so she has shown me the ropes of the LPGA, the ropes of professional golf, and I’ve been super lucky to have been shown that because a lot of people don’t get that opportunity.”

Competition is part of the family DNA.

Their father is Czech-born Petr Korda, the Australian Open champion in 1992 who reached as high as No. 2 in the world in men’s tennis. The youngest child, 20-year-old Sebastian, reached the fourth round of the French Open last year before losing to Rafael Nadal. He now is No. 50 in the men’s tennis rankings and playing Wimbledon this week.

The girls chose golf, and the LPGA is better for it.

Jessica was runner-up at Q-school at the age of 17, won her first LPGA Tour event at Royal Melbourne at 18, played in her first Solheim Cup two years later and reached as high as No. 8 in the world. She started this year by winning the season opener for the sixth title of her career, and little sister took it from there.

Nelly had little evidence to suggest this stretch was coming, especially after the USGA paired the sisters together at Olympic Club for the U.S. Women’s Open and she missed the cut.

Nelly went home to Florida to spend a week with her father in what she described as “boot camp,” which really was a chance to reset.

She returned to shoot 62 in the Meijer LPGA Classic and win by four shots, and then she carried that momentum to Atlanta Athletic Club for a second straight victory, giving her six LPGA Tour titles, just like big sister.

Korda shot 63 in the second round to tie the Women’s PGA record, and match the low score for a major at the Atlanta club that had hosted a U.S. Open, U.S. Women’s Open and three PGA Championships. And there was simply no stopping her, hard as Lizette Salas tried.

The Korda sisters stand about 5-foot-11 with a swing both elegant and athletic, and they pack plenty of power. Nelly was at a supreme advantage on the Highlands course, where she could reach all the par fives in two while Salas couldn’t get to any of them. Salas was often hitting hybrids to the green while Korda was hitting short irons.

But there was so much more to her game. Korda went 49 consecutive holes without a bogey, a streak that ended when she had a five-shot lead with four holes to play and hit into the water on the par-three 15th, a hole that gave her fits all week.

By then, it really only affected the score.

Their father was already in England with their brother, though Nelly took time for a video call, and he had a message for her: “ ‘You’re welcome for the boot camp,’ ” Nelly said with a laugh.

There is no sibling rivalry, only support.

They will be teammates in three weeks in Michigan at the Dow Great Lakes Bay Invitational, a team event. “Team Jelly” is what the younger sister called it.

More important, they will be teammates again in Tokyo. Nelly is the top-seeded player for the Olympics, and Jessica nailed down the fourth spot for the American team at No. 13 in the world. They most likely will be teammates in September in Ohio for the Solheim Cup.

On her own, Nelly will be seen as the player to carry the American flag on the LPGA Tour as a major champion and No. 1 in the world.

She is the youngest American to win a major since Lexi Thompson was 19 when she won at Mission Hills in California in 2014. That remains the only major for Thompson, who this month lost a five-shot lead on the final day of the U.S. Open.

Korda replaced Ko Jin-young, who had been No. 1 for the last 100 weeks. The top players in women’s golf since the last American at No. 1 – Stacy Lewis in 2014 at 29 – were from South Korea, Thailand or China, along with Korean-born Lydia Ko of New Zealand.

Korda is a shot-by-shot thinker, boring but effective, setting goals and staying in the present. Her victory still fresh, she wasn’t ready to think about what she wants to achieve next. For now, she is a major champion and No. 1 in the world.

“That has a lovely ring to it, not going to lie,” she said with a smile. 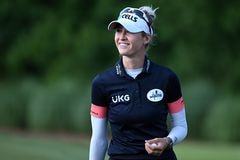 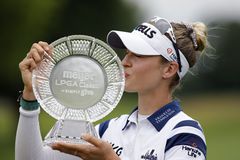