Helen Power had a discerning eye. She could identify when a picture was even slightly crooked on a wall and could play a mean game of garbage-can basketball. When she took up golf in her 60s, with her wonky swing and eagle eye, she became “Hole in One Helen” for her ability to one-shot at her local par-three golf course.

The roots for her ability likely stem from growing up in the backwoods of Manitoba. Around the age of 8 or 9, she was sent out to shoot ducks for dinner with her dogs Rex and Scotty. The sooner she was successful, the sooner her family could eat dinner!

Helen was one of nine children born to Benjamin and Irene Beauchemin. She grew up on a farm and was milking cows by the age of 6. When Helen got tired, she would curl up next to her favourite, Greenie, and fall asleep. Greenie would moo loudly in protest when Helen’s family came to take her back to bed. There was much joy and hardship in those Depression and war years, but Helen loved heading into town in the family’s horse and buggy to sell rabbit pelts for 10 cents each.

Helen came from an illustrious Métis family with strong roots to the Riel Rebellion in 1869 and the North-West Rebellion of 1885. Louis Riel came by for dinner and to chat with her great grandfather Jean Baptiste Beauchemin. A great uncle, as a young boy, witnessed the Thomas Scott execution in 1870. Another great uncle received a seven-year sentence at the time that Riel was hanged. In southwest Winnipeg, you can find a park named after the Beauchemin family.

And yet, Helen didn’t acknowledge she was Métis until she was in her 40s. When her daughter came home after a high-school lesson and suggested the family was Métis, Helen denied it and seemed fearful. The colonization of the Métis peoples, a sad by-product of Canada’s past, was “successful” in her case.

Helen completed Grade 9 at her one-room country school where she and her siblings were discouraged from speaking French. Speaking English – thereby demonstrating their cultural assimilation – ensured they were not sent off to residential schools.

Helen trained to become a licensed practical nurse, then travelled West to see the mountains. She worked as a nurse along the way, and ended up in Tofino, B.C., where she met Chesley George Power, an RCMP officer. They fell in love and married five months later. Helen and Chesley shared a sense of humour and adventure that ensured their children – Ben, Jennifer, Rosanne, Fred, Angela and Carolyn – did not grow up in a dull household.

Helen could fix a bike, seed a vegetable garden, sew a couture dress or identify an unusual bird. She was a devoted mother and wonderful cook, she made roast beef and Yorkshire puddings and every kind of pie imaginable – apple, raisin, loganberry, lemon meringue. A few Métis traditions persisted, too: She would always make tourtière at Christmas.

In her later years, Helen regularly attended Métis potlucks and knowledge keeper events with her children and grandchildren – she could still identify the jigging steps she danced in her youth.

Helen lived long enough to see her family represented on the Red River Resistance stamp released by Canada Post in 2019. By the time of her passing, she understood the key role her ancestors played in the creation of Manitoba and was a proud member of the Métis Nation of Victoria. Marsee, thank you, for everything Mom.

Lives Lived celebrates the everyday, extraordinary, unheralded lives of Canadians who have recently passed. To learn how to share the story of a family member or friend, go online to tgam.ca/livesguide 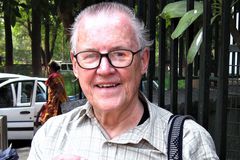 Submit a Lives Lived column
September 21, 2020
Follow us on Twitter @globeandmail Opens in a new window
Report an error
Due to technical reasons, we have temporarily removed commenting from our articles. We hope to have this fixed soon. Thank you for your patience. If you are looking to give feedback on our new site, please send it along to feedback@globeandmail.com. If you want to write a letter to the editor, please forward to letters@globeandmail.com.
Comments