Drive-thru Christmas light festivals will be going dark in Ontario weeks earlier than organizers planned because of Doug Ford’s stricter COVID-19 measures that go into effect on Saturday.

And some organizers said any hope they might change the Ford government’s mind over the holidays was quickly dimming.

Andrew Gidaro, who co-produces Holiday Nights of Lights in Vaughan, Ont., said Thursday that what started as a “meaningful dialogue” with leaders seeking a possible solution became less reassuring as Christmas drew nearer.

He now worries about the “chaos” that will play out after the holidays as people pull into his glimmering lights showcase only to find out they missed an e-mail notifying them their tickets were cancelled.

Several other light festival operators described the confusion that played out leading up to Christmas as the drive-thru spectacles they created suddenly became outlawed.

Monica Gomez, who operated the Polar Drive near Toronto’s Pearson International Airport, had planned to run the event until January, before the Dec. 26 lockdown was announced.

“We went and took the risk,” she said.

“And in the prime weeks, we are being locked out, eating the financial losses.”

Her region had already been operating under stricter grey-zone lockdown measures that started on Nov. 23, but drive-thrus were still allowed up until the announcement earlier this week.

“It wasn’t all about the revenue,” she added.

“This was about doing something for families. In our mind, we’re like, why would you take that one thing away from people right now?”

Residents are being told to stay home as much as possible and only go out for essential services, even before the month-long province-wide lockdown begins.

The latest changes impact an array of other businesses that relied on in-car experiences.

Drive-in movie theatres were told several days before the opening of Wonder Woman 1984 on Dec. 25 they would no longer be allowed to operate, while the drive-in Immersive Van Gogh exhibit in Toronto has been forced to close as well.

Some drive-in Christmas light events already threw in the towel, including Canadian Tire’s Christmas Trail, which closed up on Dec. 23 and cancelled all future reservations.

The week leading up to Christmas and the week after the holidays are key periods of activity for his three-kilometre stretch of lights inside Safari Niagara. He was planning to stay open into mid-January.

“This order is forcing us to fire all of our staff on Christmas Eve,” he said.

Glow’s locations faced a similar hurdle in British Columbia where drive-thru Christmas light events ran against regulations until a case was made to allow them to open earlier this month, Mr. Driegen said.

Ticketed events, he argued, at least require families to stay in their cars. If they’re out spotting decorated houses in their neighbourhoods, he believes more people are likely to cross paths with other sightseers.

But without a solution to keep Ontario’s holiday drive-thrus open, Mr. Driegen only sees disappointment from thousands of customers he said purchased tickets for the coming weeks.

Mr. Driegen said his customer service department got overwhelmed with requests from visitors looking to move their tickets to before the lockdown.

“But I can’t handle more capacity, so the people just couldn’t go,” he said.

“Families (may have) planned this as their one Christmas activity but now that’s snatched away from them.” 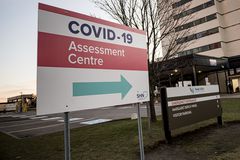 Queen’s University asks students to not return to Kingston until after lockdown
February 3, 2021