Churchill, Manitoba, is known the world over as a geographical sweet spot for polar bears – and a giant nursery for cubs. Females hunker down in snow-covered earthen dens in the forest with their babies until they are strong enough to make the long trek to Hudson Bay to feed on seals. The incredible moment when the mother emerges with her young for the first time is highly coveted by wildlife enthusiasts coming to the area.

Born and raised in Churchill, veteran polar bear guide Dennis Compayre has witnessed the rare event. His quest was chronicled in Kingdom of the Polar Bears, a two-part documentary from CBC’s The Nature of Things and Merit Motion Pictures. It took 10 days of patient waiting in temperatures as low at minus 40C to see it – and he’d happily do it again.

“They are the most charismatic animals on the planet,” says Compayre. “To locals like me, they are a source of pride. They bring so much to the community. They’re part of our DNA. They stir up a lot of emotions in people – fear, wonder and excitement.”

He remembers the bears always being around – they were just a part of life growing up in Churchill. In 1981, he was hired by a friend to be a driver for the first tundra buggy, built to take visitors outside of town to see the animals. It was then that Compayre developed a real passion for polar bears. “It was difficult at first to lose the fear I had of them,” he recalls. “Then the more time I spent around them, I realized how absolutely incredible they were.”

After working as a buggy driver, Compayre became an independent guide. Today, he primarily works with documentary film crews. With his extensive history of interacting and observing polar bears, he knows where to find them throughout the year, including the winter months when mother and cubs emerge from the den.

“You can tell if they’re good moms,” he says. “They’re calm, in control and on the lookout for anything that could harm their young – like male bears or wolverines. And their offspring will be rambunctious and curious, but not skittish.”

To see mothers and cubs, he suggests a company like Wat’Chee Lodge, an Indigenous-owned- and-operated business, adjacent to Wapusk National Park and the world’s largest polar bear denning area. Their expeditions bring visitors within 100 metres of the bears and are popular among wildlife photographers.

Churchill Wild offers a Den Emergence Quest through its Nanuk Polar Bear property in the Kaskatamgan Wildlife Management Area on the coast of Hudson’s Bay. The chances of seeing a mother and cubs are about 50-50 and not guaranteed.

“The emphasis is on the quest and the whole experience,” says National Geographic photographer Jad Davenport, director of wolf programs at Churchill Wild. “We do our best to spot them, but we take a very non-invasive approach and don’t do things like corral them on snow machines like other places may do. We’re hands-off and won’t interfere with [a mother’s] journey. We want to see the mother and cub on their own terms.”

Even if guests don’t see bears, they can usually spot packs of wolves, moose, Arctic foxes and snowy owls. Winter is also ideal for aurora borealis viewing. “The weather tends to be better than other times of the year,” he explains. “And at the lodge, there’s an observation tower to take in wonderful displays of the Northern Lights.”

Those interested in a deep dive into the world of polar bears can book learning vacations offered annually in October and November through the Churchill Northern Studies Centre (CNSC). The internationally renowned field station is dedicated to understanding and sustaining the North, attracting top researchers from around the world, along with members of the public interested in its educational programs.

Visitors can take a guided tour of its LEED-certified building, including its self-contained hydroponic garden that provides fresh leafy greens to the community year-round, or sign up for more immersive, six-day educational experiences.

“Participants enjoy two tours of the tundra on wildlife-viewing vehicles and take part in a series of lectures about polar bear behaviour, physiology, natural history and more,” explains Dylan McCart, executive director, CNSC. “These guided adventures, which pass through a subarctic region inhabited by hundreds of polar bears at that time of year, are led by our prominent polar bear experts.”

“ You can tell if they’re good moms. They’re calm, in control and on the lookout for anything that could harm their young” 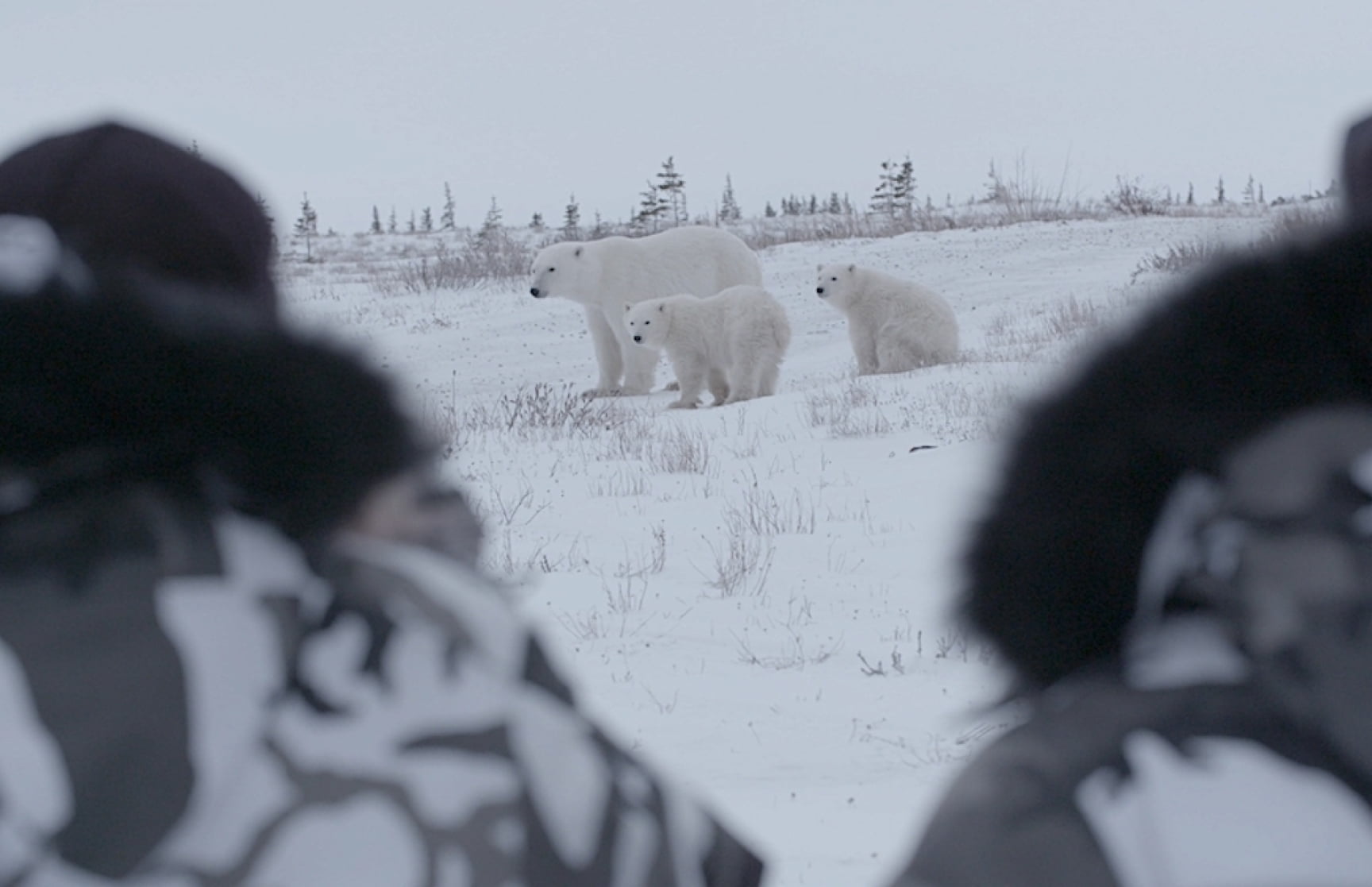 Tourists, led by guides who know the tundra and polar bear behaviour, can get within 100 metres of the bears.
Courtesy, Merrit Motion Pictures 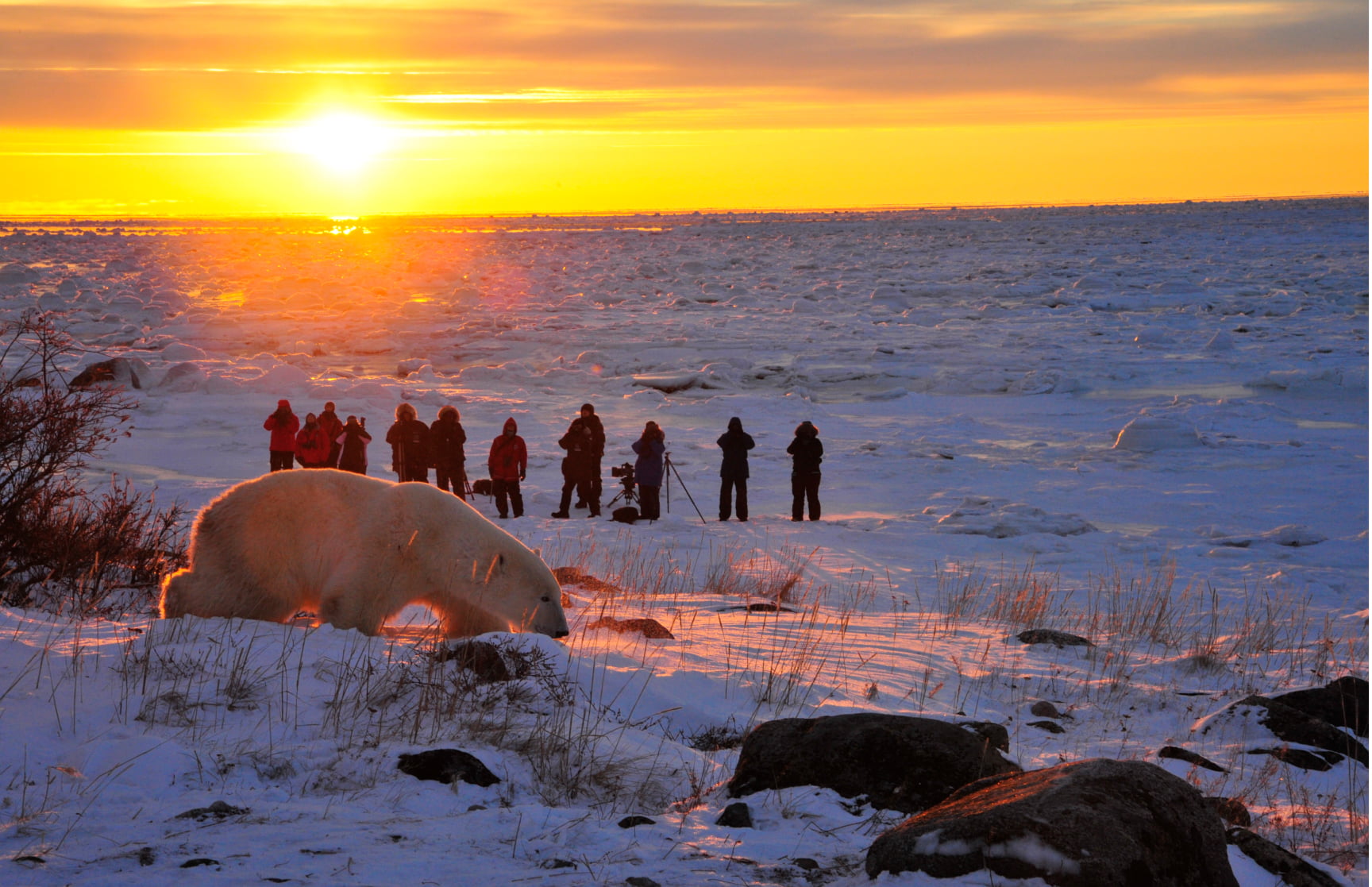 Guests will also go on outings showcasing the vibrant history of Churchill, as well as the rich cultural histories of Indigenous peoples in the region, including the Inuit, Cree, Métis and Dene. “Authentic experiences combined with in-depth learning opportunities provide guests with a profound appreciation of polar bears, their habitat and the unique struggles they face, all on the striking backdrop of Manitoba’s far north,” McCart says.

It’s a different type of experience than visitors might get with a tour company or lodge. The CNSC itself is unique as the only independent, non-profit research station in Canada.

“Whether it’s out on the tundra interpreting wild behaviours or back in the classroom getting extraordinary insights into current research, participants engage one-on-one with scientists who have decades of polar bear experiences to share,” notes McCart. “This personal rapport with active researchers fosters a meaningful connection to polar bears that resonates for a lifetime.”

Visiting the CNSC is a bucket list adventure for many. For most visitors, this is their first time seeing polar bears, and the experience of seeing these wild animals in their natural habitat is the highlight of any stay. “Our guests don’t just get to look at polar bears, they are immersed in them,” he says. “Participants welcome the opportunity to connect with polar bear experts, develop a deep understanding of the animals, and discover their unforgettable habitat.”

McCart finds that graduates of the learning vacations leave with knowledge and a desire to become polar bear advocates. “Understanding polar bears and the challenges they face inspires guests to act,” he says. “They are driven to help preserve the Arctic by changing their own habits, to elect leaders who value the environment, to pressure corporations to reduce their carbon footprint and to spark change in their communities.”

Educational programming is a win for CSNC and the polar bears, too. Fees from participants help support ongoing scientific endeavours, including polar bear conservation. This ensures these magnificent creatures will be around for us to observe and admire for many years to come.