AI is being integrated into every aspect of our lives, from toothbrushes to pets. Here, a roundup by Globe writers and contributors of the most noteworthy ways to let robots start running your life.

Mezi, acquired by American Express earlier this year, is a technology that delivers personal travel assistants to the masses. With artificial intelligence (AI), natural language processing and deep learning, it researches travel options, arranges flights, books accommodations and makes restaurant reservations – and gets better at anticipating one’s preferences with greater use. Users make requests through a simple messaging interface on a free app. Currently, about 30 per cent of these interactions still involve a team of human travel experts, but 70 per cent is done by machine. “It’s like chatting with a friend,” Mezi chief executive and co-founder Swapnil Shinde says. “That’s how realistic the AI technology is. You might not even [notice] the difference between machines and humans.” – Wency Leung

The AI-enabled P20 Pro mobile phone from Huawei is meant to ensure we won’t take bad photos. While AI is used system-wide to streamline battery and application performance, its relationship to the phone’s camera is what’s most noticeable. Out for dinner and want to snap your meal? The camera recognizes Asian food versus a burger and adjusts settings accordingly. At a music festival, point the phone at the stage and it will immediately announce settings for “outdoor performance,” automatically adjusting lighting and shutter speed for sharp images. For humans, an AI camera is truly point and shoot. – Maryam Siddiqi

Sony’s Aibo is proving that you can teach an old dog new tricks. Part of a series of robo-animals that debuted in 1999, Aibo made a comeback at this year’s CES in Las Vegas. The improved robo-dog – sold in Japan for approximately US$1,800 – uses AI technology to “grow” based off user interactions and to develop its personality over time. In addition to Aibo’s ability to build emotional relationships with its owners, the robo-pet can respond to commands and identify family members by facial recognition via cameras set in its nose. It might just be the best pet you’ve ever had. – Carly Ostroff

Pepper is a humanoid robot that makes in-store shopping as easy as a quick Google search. Using a network of sensors, cameras and AI, Pepper’s “emotion engine” reads customer reactions and then makes “smart” recommendations based on factors such as age, gender, mood and past purchases. The emotionally intelligent robot’s suggestions are meant to improve with each interaction. Pepper is currently deployed in 140 SoftBank stores in Japan, as well as Microsoft stores in Canada. In one trial with two malls in California, both retail outlets reported a customer satisfaction rating of 95 per cent. – Carly Ostroff

Have you ever stood in front of your washing machine trying to figure out which cycle is best? There’s no need to venture a guess when using the Xianjian washing machine from Haier. The smart-household appliance has been reconfigured with AI technology, which allows for an “intelligent” dialogue between the clothes and the washing machine. Once the clothes are loaded, the washing machine uses radio-frequency identification to read the care labels sewn into garments to determine factors such as style, materials and colours, and then selects a customized cycle for the load. All you have to do is give it a spin. – Carly Ostroff

In what they say amounts “almost to a form of literary cloning,” the team at Calm, a company that makes sleep stories for grown-ups, has created what they are billing as the first new Brothers Grimm fairy tale in 200 years. The Grimm brothers’ fairy tales were fed into an artificial-intelligence program that can predict text based on an author’s style, much like the auto-correct feature on your phone, and human writers did a bit of polishing to create the final version of Lost, the world’s first AI bedtime story, released online in April. – Dave McGinn

Most people brush their teeth (let’s hope, anyway), but according to different studies, only 4 per cent to 10 per cent of us are doing it properly. Ara, which bills itself as the world’s first AI-enabled toothbrush and was preordered by more than 10,000 people before it officially launched in 2017, aims to correct that. It’s embedded with sensors that analyze technique, pinpoint overlooked spots and track whether someone is brushing for the dentist-recommended two minutes. An accompanying app provides instructions to maximize cleanliness and sends a nudge if there’s a slacking streak. The Ara is made by Paris-based startup Kolibree, which also recently launched Magik, a version for kids. – Matthew Hague

Beauty-industry leaders are using artificial intelligence to offer a totally customized experience. At Sephora, the Color IQ service scans a customer’s skin and assigns a number used to recommend foundation, concealer and lipstick shades. Collected data are now being used for future product development, such as at Olay, where their Skin Advisor application informed the creation of a new line of moisturizers. “We can really start teasing apart this huge amount of data and what it means for the products that we should design,” Olay principal scientist Frauke Neuser says. Targeted personalization will make it easier for individuals to connect with the products that work best for them and increase sales for companies, too. – Caitlin Agnew

Is your newborn hungry? Tired? In pain? A free app called ChatterBaby is designed to translate babies’ cries and detect whether or not they’re in pain. Ariana Anderson, a mother of four and assistant professor of psychiatry and biobehavioural sciences at the University of California, Los Angeles, says she and her team created the app to give new parents peace of mind so they needn’t fret over every wail. So far, the machine-learning algorithm only recognizes three types of cries – hungry, fussy and pain. But with increased use (the app was downloaded more than 21,000 times last month), Anderson expects it may recognize other issues, from dirty diapers to potential early signs of autism. – Wency Leung

Want to make dinner reservations? Book a haircut at a salon? Call a business to find out its hours of operation? Soon, you won’t have to pick up the phone – Google Duplex will make the call for you. Announced in May and set for testing this summer, Duplex uses a recurrent neural network that allows it to understand context and respond accordingly, and WaveNet, a speech synthesis program. The combination of both allows Google’s newest AI to understand someone speaking on the phone and respond the way most of us would in a natural conversation – including saying “uh” and “ah,” as in, “I’d like a reservation this Friday for, uh, five people.” Simply enter the task you want done in the Google Assistant, the virtual assistant available on mobile and smart-home devices, and Duplex will take care of the rest. – Dave McGinn 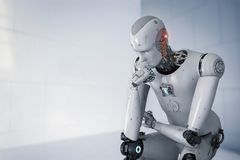