Don’t tell my family, but my favourite day of the year is not Christmas. It’s the first Monday in December, when I get to spend all day at the Toronto Humane Society. I am lucky enough to get to photograph the beautiful – sometimes complicated, but always beautiful – animals in need of homes, paired with the best Canadian pet products of the year. Assisting me are volunteers who care for the animals so much, their love is palpable.

As far as models go, they don’t come any better than Gabby, an eight-year-old rottweiler/shepherd cross. She came immediately in for a hug, gently accepted a treat and patiently let me put her in a cozy Canada Pooch hat and snood – a trendy, tubular scarf. (Both start at $20, from canadapooch.com.) With a form of anemia, Gabby is searching for a long-term palliative foster home, where THS will provide all of her food, medication and medical care.

Two-month-old brothers Hickory, Spruce and Polar were surrendered to the humane society from Northern Ontario, where limited veterinary care means more unwanted litters than they can handle. As sweet as you’d imagine these babes to be, they were the definition of holly and jolly, rolly-pollying all over their swanky Casper dog bed (starting at $150, casper.com), in festive collars from PetSmart (petsmart.ca). They’ll be available for adoption in a few weeks – and will find homes quickly.

Not every pup is as lucky. Odie has spent most of his life – over four years – in the shelter. And after streams of people passing by his cage and going unnoticed, he’s developed a distrust of strangers – but once you’re in, you’re in. Odie broke my heart, because humans have failed him. But humans – the volunteers in the shelter – have also lifted him up, and he loves them right back. Decked in a beautiful Bone and Bred collar and leash (which come in Calgary and Toronto varieties, too – starting at $34.99, boneandbred.com), Odie needs a patient, dedicated owner to give him the life he deserves.

Kia, a seven-year-old cane corso, also has not had a great start. For reasons unknown, she is only super sweet and calm around women. (With men, I’m told, she’s quite fearful.) On her wish list to Santa is a caring, dedicated female owner – along with a handmade, organic doggie advent calendar from Toronto-based Root Pooch ($23.99, rootpooch.com) and a monthly toy and treat subscription service from Bowzer Box (bowzerbox.ca).

One-year-old Sidney is, thanks to the heroic efforts of the shelter staff, an entirely different dog compared to when she was brought in, seized from her owner on the basis of neglect. Today she is a happy, bouncy ball of energy; coincidentally, she also loves balls and anything that squeaks. We grow to be fast friends and my heart hurts when she leaves the room. With a home for the holidays, I know this girl will only keep impressing – especially in her limited-edition Canada Pooch “Toronto vs. Everybody” hoodie (starting at $45, canadapooch.com).

Shogun Jack purrs throughout our whole photo shoot, and I can’t believe he is 11 years old. This senior fellow was surrendered because his owners were moving and has since been waiting for his forever home. While he passes the time, he’s doing some light reading: a hilarious, somehow artistic, coffee-table book of his feline counterparts, indulging in their favourite substance: Cats on Catnip. ($18.90, amazon.ca.)

Lucius, left, and Draco are the sweetest three-month-old kittens. They are from a litter of eight, all named after Harry Potter characters, who were transferred from Northern Ontario. Since our photo shoot, all have been adopted, including these characters, who loved their time in Amazon.ca’s popular cat gift – the Pawaboo Cat Scratcher Lounge Bed ($35.99).

After their human passed away, brothers Monkey and Trouble were surrendered by a family member who couldn’t take them in. Favourites among the shelter staff, these cool cats were unfazed by what most of their peers get really excited about: lasers. The Petcube Play is a smartphone-controlled camera with a built-in laser toy, so you can play with your furry friend from anywhere in the world. ($224, amazon.ca).

Two-year-old Jujube was extremely chill, and gave us all the poses. He was transferred from an overcapacity shelter in Quebec and required a specialized surgery once he arrived due to an awful infection in his ear canal. This feline was highly intrigued by PetSmart’s Merry & Bright cat tent ($10.37, petsmart.ca) and got into the spirit with his jingle-bell collar ($10.99, petsmart.ca).

Did you know “other” animals are at the Toronto Humane Society – not just cats and dogs – and need homes for Christmas? No one was more surprised than me when Rapunzel, the two-year-old bearded dragon, came in for a photo. She remained unimpressed – but she modeled the heck out of her Santa hat ($4.97, petsmart.ca).

Another “other,” Chevy, the nine-month-old mouse, is still waiting – along with his camera-shy best friend, Chase – for his human. Both are available for adoption together – along with many more beautiful animals, at the Toronto Humane Society.

To have creatures both big and small stirring in your home this Dec. 25, visit torontohumanesociety.com.

The 12 very best pet gifts this Christmas (just wait until you see our models)
December 18, 2017 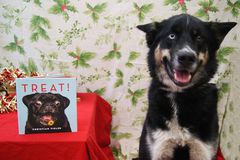 Give them a home for the holidays: Rescue pets model the year’s best gifts
December 14, 2015
Follow Amberly McAteer on Twitter @amberlym
Report an error Editorial code of conduct
Due to technical reasons, we have temporarily removed commenting from our articles. We hope to have this fixed soon. Thank you for your patience. If you are looking to give feedback on our new site, please send it along to feedback@globeandmail.com. If you want to write a letter to the editor, please forward to letters@globeandmail.com.
Comments