On the morning of an evening flight back in March, I awoke with two words clear in my mind: Be kind.

Less than a week earlier, I had arrived in Vancouver on an open-ended ticket, with plans to stay for the spring. But a day after landing, the pandemic was declared, my itinerary went sideways and I was forced to book a return flight to Toronto.

The swift unravelling of normalcy mixed with a heavy dose of uncertainty must have inspired this mantra to bubble up in my consciousness. It’s hard to avoid the counsel to “be kind” as it’s everywhere, from Bible scripture to the closing tagline of the Ellen DeGeneres Show. It felt like logical advice given the constant challenges we’d be facing – especially when travelling. But I soon learned that intention and reality are two different things and that in our current climate kindness can often feel like a stretch.

When I arrived at the boarding area of my red-eye flight, I assessed the crowd to gauge who I’d be confined with for the next few hours. It was eerily quiet, with most people wearing masks, staring at their phones. As we moved through the passenger boarding bridge, a woman in her 60s wearing a pink teddy bear coat started approaching other travellers and loudly questioning whether they had the virus.

Annoyed by this lady’s inability to read a room, I shot her a dirty look as I made it to my seat. She soon saddled up and informed me we were seatmates. As she squeezed past, I avoided eye contact and left my headphones in, attempting to block out her erratic energy. But I could sense her staring at me. I took out my headphones and asked whether everything was okay.

“I just wanted to know if you’re a nice person,” she said. “Because you’re being rude.”

I was stunned by both my seatmate’s confrontation, and the truth in my behaviour, which was the opposite of how I had intended to act just hours earlier. Still, I didn’t have the capacity to apologize. I told the woman it had been a long day and an even longer week. When I put my headphones back in, I could hear her muttering obscenities before she eventually fell asleep.

It was clear that being kind was not my instinctual reaction when consumed by stress, anxiety and fear. As it turns out, that’s normal.

In his book In the Realm of Hungry Ghosts, which examines the complexities of addiction, Gabor Maté writes how it’s common for health care workers to snap at patients given the harried environment they work in.

“Irritability begets defensive hostility, and hostility sets off more reactive anxiety and rage,” he writes. “Two human beings – one who is seeking help and the other who is committed to helping – are soon at loggerheads, quite contrary to their own intentions."

This feels especially relevant during the pandemic, where the harried environment is all around us. I encounter ugly behaviour regularly: in the middle of an empty roundabout, where a shouting match erupts between a biker and a pedestrian; at the grocery checkout, where one customer feels disrespected by another’s interpretation of physical distancing; in my building lobby, where someone keeps tearing up a poster with guidelines on stopping the spread of COVID-19. I’m also enraged and baffled by the spike in texts I’ve received from ghosts of my past – including the married man who had tried to initiate an affair with me while his wife was pregnant – using the pandemic as an excuse to reconnect. Kindness feels impossible to grasp as I’m too clouded by negative energy, both within and all around me.

It’s common to feel pressure if there’s a perceived expectation to be a kind person, says Zindel Segal, a professor of psychology at the University of Toronto and one of the founders of mindfulness-based cognitive therapy. As much as it’s easy to get caught up in what it means to be kind, the real point of delivery, he says, is seeing where you can act in that way. Start with the intention and go from there.

“There are ways in which we may be expecting too much from ourselves. We still have to react as people,” he says. “Kindness is reachable if you remind yourself that you’re on a path or intention of wanting to have this in your life, and try to do one thing a day that connects you to it. Don't expect it to be there, 24/7.”

That one act could mean checking in on a friend, or offering to bring groceries to a neighbour. It could also start with yourself.

“Consider the direction of kindness,” Segal says. “Are you projecting it to the people giving you dirty looks for not wearing a mask or to yourself if you feel shamed by them?”

It’s a notion echoed in Maté's book and one I’m trying to channel as I’m bombarded daily with the fury unearthed by this pandemic. He writes: “If we want to open up a healing space for others, we first have to find it in ourselves.” 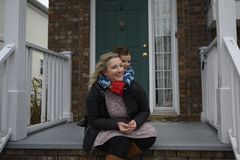