In shades of cotton-candy pink, butter yellow, fire-engine red, and coral, peonies are so revered in their native China that they’re referred to as the king of flowers. They symbolize honour, prosperity, and opulence and are a common theme in Chinese paintings, some dating back several centuries.

Vancouver’s Sophia Cheng is fascinated by the blooms. The mother of two was thrilled a few years ago when her husband organized a family day trip to celebrate Mother’s Day. Along with her sister, they visited a peony farm, which happened to be having an unusually early start to the season that year.

“My mom, sister, and I used to watch these Chinese TV soap operas that centred on the Chinese dynasties,” says Ms. Cheng, who runs her own public relations firm. “I have loved peonies since learning all about Chinese imperial history, where peonies are prevalent in art.

“It was magical to see rows of these peony shrubs all over and unpicked,” she says. “Peony heaven. Sometimes just one large peony in bloom is enough to brighten up a bad day.”

Ms. Cheng came home with a big bouquet (and tips on how to make the flowers keep blooming). But what made that Mother’s Day so memorable was discovering a new place with those she holds nearest and dearest. “The peony farm was an experience,” she says. “I’ll never forget it.”

Americans who are shopping for mom this year, meanwhile, have flowers, dinner or brunch, jewellery, clothing, personal services (like a spa day), and electronics on their list, according to this year’s National Retail Federation survey about the holiday. Americans will spend an average of $108 a person, according to the NRF survey.

For the first time in the annual survey’s 15-year history, polling company Prosper Insights and Analytics asked consumers about “gifts of experience.” Think outings like floating in a hot-air balloon, strolling through fragrant botanical gardens, going horseback riding or ocean paddling. Twenty-nine per cent of respondents said they would like to receive such a gift, up from 24 per-cent last year.

Recent research shows that people derive greater happiness when they purchase experiences rather than things. Human beings get used to objects, such as fitness trackers, mobile phones, and necklaces; after a while, the thrill wears off. The same can’t be said of learning or discovering something new, whether it is river-rafting, wine tasting, scaling a climbing wall, doing stand-up paddle-board yoga, or participating in anything else that builds stories. Those experiences stay with us.

“Just as we remember experiences long after they’re done, people enjoy the anticipation of an experience more than the anticipation of owning something,” says Thomas Gilovich, psychology professor at Cornell University. “Experiences connect you to other people. They contribute to who you are. They’re a part of you, unlike material things, which are separate from you. They build up your experiential résumé.”

Rather than give her mom body lotion or earrings, Ms. Cheng is arranging a family photo shoot at the beach or some other beautiful and unique spot. She will make a keepsake photo album, but the day itself will be full: After the photos, the family will go for dim sum.

Ottawa siblings Ruthie and Katie Lark have long eschewed conventional gifts for their mother, who plays down the holiday. Over the years, spa gift certificates have expired, and, although their mom loves the moon and outer space, gifts in that department can be hard to find.

One year, Katie took her to the 400-hectare Central Experimental Farm on the outskirts of Ottawa, with its eye-candy ornamental gardens, arboretum, and grain-growing fields. (Besides the enjoyable wander with her daughter, she came home with a couple of new plants that were being sold by Friends of the Farm, a non-profit organization run by volunteers).

Ruthie says she and her mom bond over list-making. They have a special spot where they go to sit, have coffee, and talk about their lists of things they want to do that year or in the future. “We love talking about our goals and ambitions,” Ms. Lark says. “We talk about why it’s important to meet those goals and reflect on the things that we have done. It’s an incredibly rewarding experience.”

For Vancouver’s Oana Papuc, one way of bonding with her mom is over books. Both, along with Ms. Papuc’s sister, are David Sedaris fans, having read every one of his books; they have a routine where one of them buys a hard copy of his latest and they pass it on to each other. (Me Talk Pretty One Day is her favourite.) When Ms. Papuc, an entrepreneur and co-founder of a linen company called Flax Sleep, found out that the humourist and best-selling author was going to be appearing in Vancouver on Mother’s Day, she jumped at tickets.

The outing is not a surprise for her mom, because they all have busy lives; Ms. Papuc has two children, her sister works in a demanding profession, and their mother has a hobby farm and orchard in the province’s interior, where she spends weekends.

“As we’ve gotten older, it becomes harder and harder for the three of us to spend time together, just the three of us,” Ms. Papuc says. “Setting this time aside to do something together means much more to our mom than a boxed present.”

As Vancouver’s Dee Dhaliwal looks back, a Mother’s Day from a decade ago stands out: a day-trip to B.C.’s Bowen Island with her husband and daughter, who was then 16. They took the short but spectacular ferry ride over, strolled along the main street and poked in small shops, and had dinner at an Italian restaurant. What she cherished about that particular day is what she still has from it: “the memories,” Ms. Dhaliwal says. “The time spent together. The smell of the sea and the sun and breeze on my face. And the smiling face of my daughter.”

Vancouver artist John Ferrie says time with his mom is at the heart of the holiday, this year more than ever. The 86-year-old woman has had serious health problems lately, and so the goal isn’t to find her the perfect, shiny gift; rather, he will make her brunch and they will talk, reminisce, laugh, and just be together.

“Every day is a gift at this point.” 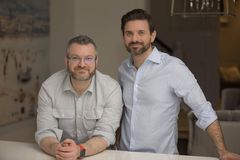