It’s one of those minus 2 C that feels like minus 9 C days in Niagara Falls. There’s photogenic ice framing the edges of the famous falls, the trees along the Niagara Parkway are blanketed in frozen mist, and the hardcore zipliners splayed out like starfish are gleefully drinking in the scene from above.

If someone mentions ziplining, you likely picture grinning adventurers in shorts, T-shirts and sneakers dangling in the sunshine, probably in a lush jungle – not people bundled in fleece and waterproof layers wearing ski gloves, toques and boots for a snowy Canadian thrill.

But take it from Emma Kande: “You should go both times of year and see the change in weather.” She’s the guest services supervisor for WildPlay Niagara Falls – which is running its “Zipline to the Falls” three days a week this winter – and she has ziplined more times than she can count. “It’s way colder in the winter,” she allows with a grin.

Winter ziplining has its challenges – the first being that people don’t know it exists because so few places offer it. But Niagara Falls, as they say, “is always in season” and that means pushing boundaries.

The zipline process, though, is always the same. Kande makes sure you’ve signed a waiver, asks you to step on a scale and records your weight on a wristband. You must be at least seven years old and weigh no more than 275 pounds (124 kilograms). Staff need to have a sense of your potential speed – the heavier you are, the faster you’ll go. Kande hands over a helmet – one size usually fits all – and sends you up to the launch deck.

WildPlay opened in 2016 with four parallel lines that gravity-floats riders 670 metres (2,200 feet) down the edge of the Niagara River gorge to an observation landing for a carbon neutral experience.

To be clear, riders don’t literally fly over the American or Canadian Horseshoe Falls, but they do get “world wonder views” of them. Speeds generally max out at 70 kilometres (40 miles) per hour, but that depends on your weight and riding position, the wind speed and direction, and what tricks you use to speed up or slow down.

“ You feel taller flying next to such a powerful force of nature. The sounds are mighty. Even after 100 zips, the views are humbling.” 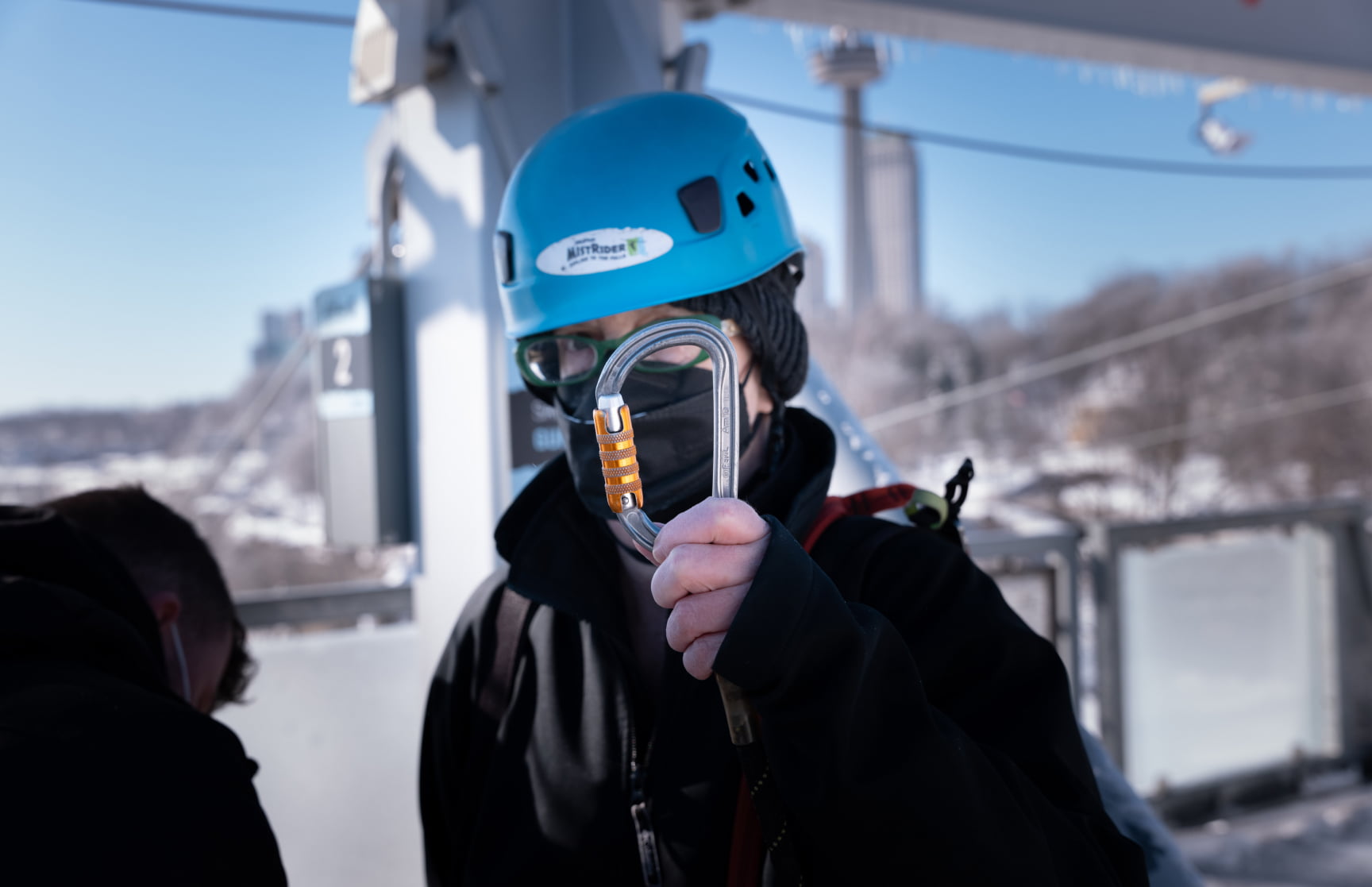 Writer Jennifer Bain gets suited up, ready for takeoff. As she says, the best thing about winter ziplining is the short wait for your turn – but you may be grounded by Mother Nature if the wind is blowing in the wrong direction or thick ice forms on the cables.
Thomas Bollmann 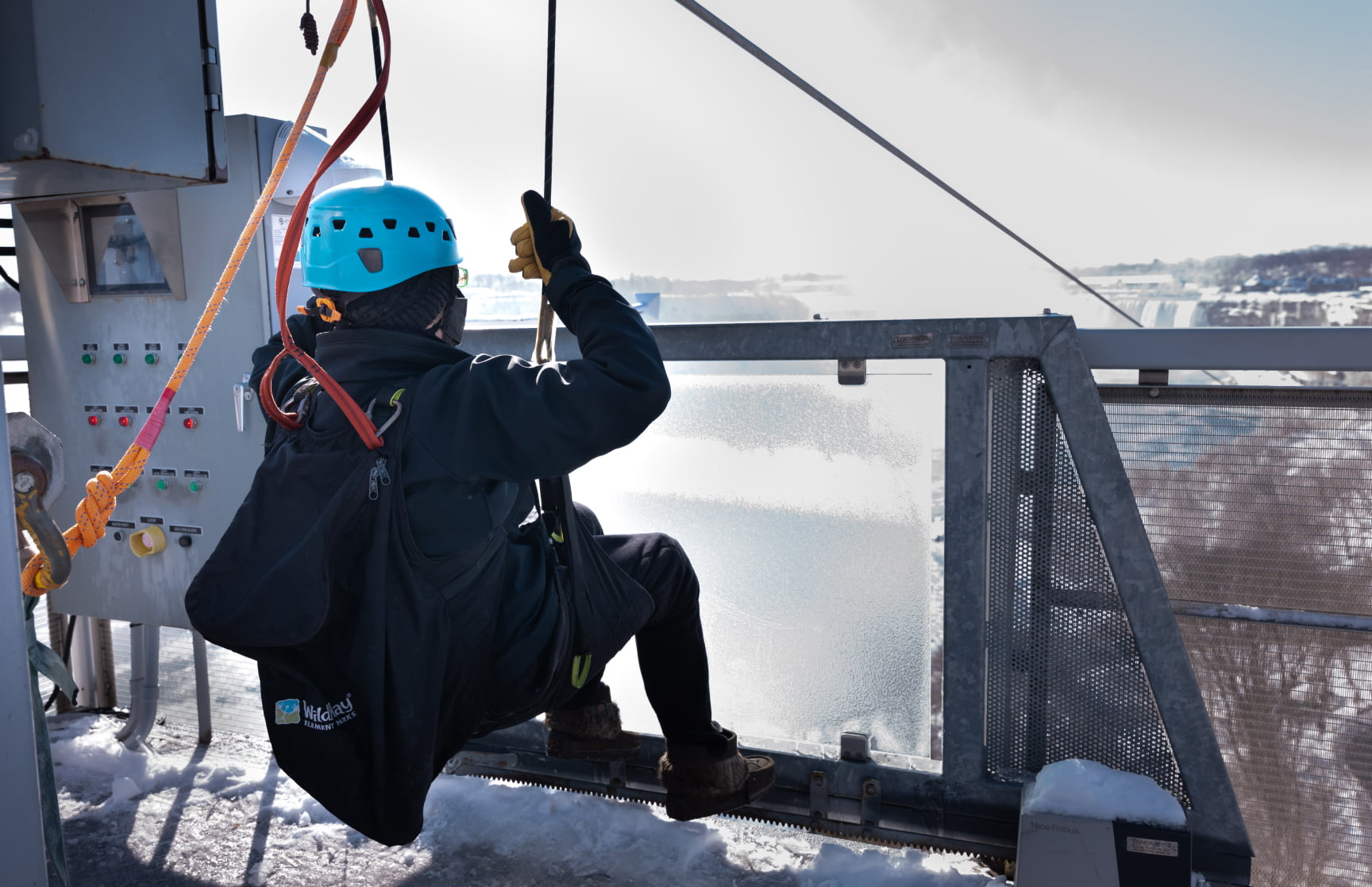 Guides will harness you and there’s a generous, built-in backpack to store cellphones and belongings. You’ll be seated – not splayed out like Superman – so you can see the falls. “It’s actually comparable to a paragliding harness and it’s customized to our zipline,” says Hannah Beckett, WildPlay’s element specialist. Guides explain the automatic braking system and warn you to be prepared to “swing up” slightly at the landing deck.

Watch a video at the check-in kiosk and this final “swing” seems daunting. But it looks worse than it feels. “We tell you about it so you don’t get that `holy crap’ kind of feeling,” says Beckett, who handles safety and trains the guides. “You sit, you relax, you don’t have to worry about what to do.” The gates open, the guides yell “launch” and pull a rip cord and you are off.

Savour every second, because the experience typically lasts just 40 to 60 seconds. That starfish position? Sticking your arms and legs out slows you down.

Kayla Beckett, WildPlay’s attractions manager, has tried eight ziplines in three countries and has done this one thousands of times. “Don’t forget to take in the view,” she advises. “I have worked here for six years and so many people get to the landing and say they forgot to look around because they were looking at the end of the zipline the whole time.”

At the landing deck, guides unclip you from the line, unharness you and send you out through a gift shop that sells photos and videos from seven sets of cameras along the zipline. A shuttle takes you back to the top to hand in your helmet.

Lindsay DiCosimo has been riding the zipline since its first day in 2016. “The landscape is awe-inspiring,” says the marketing manager for Hilton Niagara Falls/Fallsview Hotel & Suites. “You feel taller flying next to such a powerful force of nature. The sounds are mighty. Even after 100 zips, the views are humbling.”

At first, WildPlay ran its ziplines from May to October, and then realized it could stay open as long as there isn’t ice or snow buildup on the lines. It experimented with winter ziplining in early 2020, until the pandemic shut things down. It tried again last year and this year, following TSSA (Technical Standards & Safety Authority) and ACCT (Association for Challenge Course Technology) standards with daily, monthly and annual inspections.

“If it’s frozen over, we’re not going to send guests down the line,” says Hannah Beckett. “We are by the falls so when we get strong headwinds, the mist blows our way onto the lines, as well as the trees. It’s gorgeous but it’s a pain in the butt also.”

The only fix is to wait until things melt. It’s worth noting that fair-weather zipline riders also face delays, usually from wind and lightning.

If you are in need of that backup plan, Journey Behind the Falls is always a safe bet to see things from below and behind. But a thrill that’s comparable to ziplining is flightseeing with Niagara Helicopters on a customized Airbus H130.

It’s a 10-minute experience compared to ziplining’s one minute and only the pilot can control the speed. It comes with a cheeky certificate that says you’ve joined “the select society of highflyers, daredevils, romantics and adventurers who have gone ‘over the falls.’”

You will actually fly over the falls, as well as the whirlpool, river and gorge. And, weather permitting, you may even soar above those intrepid zipliners.