My brother was a professional soccer player and, ever since I was a kid, I have watched him signing autographs outside team buses and locker rooms, posing for photographs, shaking hands. After a game a few years ago, my family and I waited for him alongside a group that included two drunk guys wielding bullhorns, team flags wrapped around their necks (nb: not my brother's team).

When my brother appeared, it became clear that he was the reason for the drunk guys' presence; while we walked,they staggered close behind us, their obscenities and vitriol amplified by the bullhorns, like evil, beer-soaked cheerleaders.

It was all bewildering to my toddlers, who worship their uncle.

Growing up in its proximity, I have always been suspicious of fandom. My own bouts of adolescent obsession felt shameful (Ralph Macchio certainly was, R.E.M. maybe not), a near-sexual urge that I would broadcast almost against my will and then quickly abandon. Now that the Olympics are upon us again,my inner etiquette student wants to know: Is it possible to be a fan and not be an idiot?

In the 1970s, Arizona State University professor Robert Cialdini and colleagues studied the habits of college students at six schools after a football weekend. They discovered that,when a team did well, students increased their use of the collective pronoun "we" and proudly sported team logos.

This phenomenon was tagged as "Basking in Reflected Glory" or BIRGing. When the team lost, though, behaviour turned to "CORFing": Cutting Off Reflected Failure. Fans would distance themselves from the losers, intoning "They screwed up" or "Bad ref," as if their own self-esteem had been attacked.

Extreme identification with sports may even affect physiology: One University of Utah study showed that, when their team scored, some of the most committed fans actually experienced a rush of hormones, just like the player who made the goal.

This brings me back to the bullhorn drunkards and seems completely bizarre – a kind of pathetic narcissism or at least vicarious living through others.

Then again, fandom can be kind of sweet, an instant way to find community: Those midnight-screening dudes at The Amazing Spider-Man or the punks in the front of the mosh pit are all are waving their own kind of giant foam finger. That band, team or movie star can seem like the one constant – the steady receptacle for love – in a world in flux. When fandom carries over from childhood and is pocked with memories of holding hands with Dad in the ball park or a first date at a Woody Allen movie, the object of devotion is soldered to the heart. The poet Donald Hall writes: "Baseball,because of its continuity over the space of America and the time of America, is a place where memory gathers."

Sociologists have noted that all of this – the unswerving dedication and ritual worship –sounds a little like religion. "The Church of Baseball," as it was called in Bull Durham, even has its own hymns. My husband described going to an interleague Yankees vs. Phillies game in New York where a lone fan in the bleachers wore a Boston Red Sox hat. Once spotted, the chants began: "Take it off! Take it off!"

Soon, several Yankees fans confronted the offender face to face – not violently, but angrily, as if catching the interloper in a gesture of grave disrespect, exactly like someone wearing a hat in a church. He had transgressed.

But when does an affectionate, protective crowd become a hateful, violent mob? Here, the recent Euro Cup seemed like a chance for Canadians to exercise nostalgia for the homeland, a kind of play-acted nationalism from the comfort of a Canadian bar. But in the stands, nationalism slid into racism, with Spanish, Russian and Croatian fans reportedly chanting racist slogans and throwing bananas onto the field where the black Italian player Mario Balotelli played. The church is not incorruptible.

In a suggestible and anonymous crowd, how to tell the fans cheerfully piggy backing on glory from the zealots?

European soccer's governing body, the UEFA, decided it couldn't and wouldn't, fining the Croatian Football Federation €80,000 ($98,444). The sum was offensively small, but the gesture is interesting: It was an attempt to hold the team accountable for its fans, over identification suddenly working in two directions.

For the most part, the Olympics seem to foster a gentler kind of enthusiast, perhaps because the net is wide: To be a fan of the Olympics requires no secret handshake, no insider information. All that's needed is (temporary) loyalty to the flag of one's choosing.

The athletes themselves will likely be different in four years, but for those two weeks their achievements are improbable, awe-inspiring and worthy of worship.

When the Olympics end, there will be a space where the hormone surge was, a post-Olympics crash often described by the citizens of host cities.

The same feeling happens when you grow out of the band you loved or stop following your childhood team. The space left behind spurs us on to the next, great unreciprocated obsession. 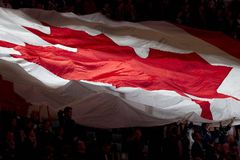