As deathbed wishes go, it was an unusual one.

It wasn't that old chestnut about wishing he had worked less.

It wasn't a tearful attempt to right a wrong.

Most glaringly, shockingly even, it wasn't born of charitable emotion, which is what we expect the dying to do -- move to a place of grace.

No, Dennis Hopper's deathbed wish was to get a divorce.

Earlier this month, the Hollywood star, 73, who is reportedly in his final few weeks as he battles prostate cancer, filed a divorce petition against his wife of nearly 14 years, Victoria Duffy, mother of his six-year-old daughter Galen. The decision is not without controversy - Ms. Duffy has complained that the move is being orchestrated by his eldest daughter.

Well, yes, death is not often a smooth family affair when inheritances, children and latter-day wives are involved. But Mr. Hopper's deathbed divorce plea may be more interesting in what it summons in our feelings about death, love and loneliness.

Not only does it ask us to think about the psychology that frequently comes into play during the final journey - "a time when you want to express your essential truth" as Dawn Cruchet, a Montreal-based grief counsellor and former palliative-care nurse, explains - his decision also helps those who are single address, and hopefully tamp down, the prevalent fear of dying without a spouse by their side.

In discussions I have had with friends and others who are divorced in midlife, the No. 1 fear many express is of being alone as they age. They worry: Who will take care of me in my dotage? Who will be there to comfort me if I don't have a partner?

"I know so many great single midlife women who cannot find partners," a male friend of mine observed. "It's such a shame," he added, acknowledging that men his age have little trouble finding eligible women to date and marry. Not that women who have lived in a difficult marriage and exercised their option to leave are necessarily anxious to remarry.

But finding love again? Divorce may afford a glorious freedom, but the challenge of finding a new partner and the resulting realization that you may have to learn to live alone for a long time can feel like a punishment - as though it is the price of escaping a toxic marriage.

"Among the divorced, the least marriageables in our society are older women, highly educated who make a good salary," Dr. Francesca Adler-Baeder, a professor of human development and family studies at Auburn University in Alabama, recently told The New York Times.

The fear of being alone - and dying alone - can significantly undermine the joy and hard-won confidence that many divorced midlife women feel.

Here, then, is a lesson for the single, the divorced, the widowed, and for those contemplating divorce, "least marriageable" or not.

Mr. Hopper would seemingly rather die surrounded by those he loves, regardless of whether they conform to the traditional definition of family. He wishes Ms. Duffy well, his statement reads (at least, that part is charitable), but he would rather have "peace and quiet" than her presence at his bedside.

What a profound statement. We have too narrow a definition of love. It doesn't always come in the guise the culture assumes or on Valentine's Day. We over-sentimentalize marriage, seeing it as the ultimate, most intimate expression of love, and considering those who live without it as somehow bereft or incomplete.

In Not Yet, a beautiful 2009 memoir about nearly dying following a severe asthma attack and several heart attacks, Wayson Choy wrote about his fear of being alone. He is a gay man without children or partner. But he discovered that the people he calls family - a couple he boards with in Toronto and another in the country - surrounded him as he lay in hospital. "I knew how I was loved," he explained tearfully to me in an interview.

All those who are single in midlife and beyond should take note of this. Expressions of love are manifest in so many ways that are often undersold. Arguably, there is greater comfort in the attention of good friends who are involved in your life because they chose to be rather than that of a spouse or lover, who may be attending you out of obligation.

That said, I should add that the other profound truth about dying is that despite the many or the one who may sit by your side, it is a journey, ultimately, that you must make alone.

"You are the one who is dying. No one else is," Mr. Choy observed.

Maybe Mr. Hopper understands this too. He doesn't need a wife to know how intimately he is loved in his final moments, and even if he did have her by his side, she would only be able to accompany him so far.

Sarah Hampson's book on midlife post-divorce, Happily Ever After Marriage: There's Nothing Like Divorce to Clear the Mind , will be published by Knopf in April. 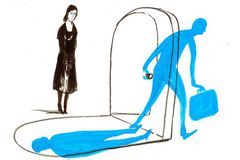 Am I angry about my divorce? More like disappointed
May 3, 2018
Follow Sarah Hampson on Twitter @Hampsonwrites
Report an error
Due to technical reasons, we have temporarily removed commenting from our articles. We hope to have this fixed soon. Thank you for your patience. If you are looking to give feedback on our new site, please send it along to feedback@globeandmail.com. If you want to write a letter to the editor, please forward to letters@globeandmail.com.
Comments