It will be a sad day for American talk-show hosts if Rob Ford ever finally departs the Toronto mayor's office.

Following the rollercoaster ride of events at Wednesday's Toronto city council meeting, the late-night jokesters had another feeding frenzy at the expense of the Toronto mayor who refuses to step down despite his admitted drug use and other improprieties.

Once again, Jimmy Kimmel Live led the charge, and yesterday's contentious council meeting just happened to unfold on the host's birthday. You can watch the clip here.

"The best gift I got today was a Toronto city council meeting starring almost-unbelievable Toronto mayor Rob Ford," cracked Kimmel in his opening monologue. "Council called a meeting today to vote on whether or not to ask him to resign, which seems very Canadian to me."

Next came the footage in which Toronto city councillor Denzil Minnan-Wong asked Ford: "Have you purchased illegal drugs in the past two years?"

Kimmel Live producers heightened Ford's delayed response ("Yes, I have") by playing the Jeopardy theme music over the clip.

In the same show, Kimmel ran the portion of the council meeting in which councillor Mike Del Grande referenced Ford being kicked out of a Toronto Maple Leafs game in 2006 for being drunk and disorderly.

Ford's response: "I said it would not happen again and it has never happened again….at the Air Canada Centre."

Which naturally earned a huge laugh, both from the council members in attendance and from Kimmel's studio audience.

Kimmel also gleefully delivered the punchline "At the end of the meeting council voted 37-5 to ask Mayor Ford to step down. The five council members who voted against were Rob Ford, his brother Doug, a crack dealer and two hookers."

Not surprisingly, Kimmel also brought up the recently-released court documents that have former Ford staffers alleging that they saw the mayor snorting cocaine and keeping company with prostitutes.

Kimmel's zinger: "It's like Toronto has a 400-pound Andy Dick running the city."

Naturally, the Ford saga provided comedy fodder for The Tonight Show with Jay Leno, which has previously hired a portly red-faced actor to portray the embattled mayor in several sketches.

Last night, the show ran the clip of Ford pausing to answer the question of whether or not he purchased illegal drugs, but techies added in a devil and an angel to either of his shoulders.

Said the devil: "Rob, don't tell the truth. You deserve to unwind with a little crack cocaine.

Said the angel: "Ah, just tell them the truth and we'll go get drunk."

The gag: In response to the breakout success of the recent Fox series Almost Human, Leno claimed the network had plans to launch a new series starring Rob Ford. The title: Almost Sober.

In the later NBC timeslot, Late Night with Jimmy Fallon kicked off his monologue with a recap of Wednesday's council meeting, and when his New York audience began hooting their approval, he cracked, "You guys are acting like a bunch of mayors from Toronto."

Naturally, Fallon addressed the issue of Ford's council members urging him to take a break from the mayor's office.

"He's just out of control. Now they're trying to force him to take a leave of absence. When asked what he would do with his time off, he was like, 'Probably smoke crack. Stop asking questions. I just keep getting into more trouble'."

Over on the TBS talk show Conan, meanwhile, the show had the good fortune to have Toronto-born comic actor Will Arnett as lead guest. It didn't take long for host Conan O'Brien to ask him for his opinion of the Rob Ford drama.

"I don't know what to make of what's going on," said Arnett sheepishly. "It's insane."

Both Arnett and O'Brien had fun with Ford's now infamous "drunken stupor" comment (Arnett: "You don't want your mayor to be in any kind of stupor.") and Arnett even suggested that Ford's behaviour was somehow connected to Canadians trying to get attention from the rest of the world.

"I think Canadians have started to feel like we're not getting enough notice," he joked. "So we just went with the U.S. number-one export: crack."

The crowd went wild. You can watch the Arnett appearance here.

For his parting shot, Arnett insisted to viewers that he did not vote for Rob Ford. "People in Toronto did," he said. "Everyone knows I'm not a Ford guy. I'm a GMC guy."

And on Thursday, Fox news anchor Howard Kurtz pointed out that Ford's scheduled midday press conference would coincide with a conference being held the same day with U.S. president Barack Obama.

Tweeted Kurtz: "Rob Ford holding presser the same time as Obama: Do I want to hear about health care or whether Toronto's mayor was entertaining an escort?"

But the strangest celebrity acknowledgement of the Ford story arrived Thursday afternoon from another infamous bad boy: Charlie Sheen himself, who offered advice to the mayor in the wake of an earlier fake news report that had him calling for the mayor to resign.

To recap: On Wednesday, the satirical website The Daily Currant ran a fictitious news story saying that Sheen was filming a sixth entry in the Scary Movie franchise in Toronto and happy to weigh in on the Ford developments.

The story included the hoax quote from Sheen: "I think it's fair to say that Rob Ford parties too much. I can honestly tell you I've never been that high."

The Currant story was a joke, but on Thursday afternoon the real Sheen reached out to Ford with the following note:

"Dear Mayor Rob Ford, The only truth or correct reporting in today's repulsive story regarding my alleged comments about you, is the accurate spelling of your great city. Your personal life is and never would be, any of my business. I'm sorry for any grief this may have caused. If I can be of any assistance in any capacity in this media cesspool, please accept the noble offer of my steady hand and compassionate heart.

Only Rob Ford could make Charlie Sheen look like a class act. 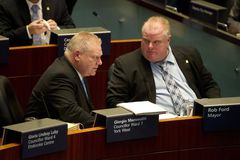 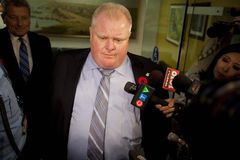