It's quite a job, so maybe we should feel sorry for them, those writers who are deployed to write cover stories about Hollywood bombshells. I imagine them, after their encounters with the other-worldly creatures, bent over their keyboard, smoking, pulling out their hair or twirling it furiously like a cotton-candy maker on Staten Island, as they think up similes so bad they seem good, for a brief, delusional moment, adding one clause after another to their sentences, breathless as a woman who has just spied a new pair of Jimmy Choos, all in an attempt to capture the skin, the hair, the figure, the eyes, the mouth, the stuff of haute celebrity. I am sure they end up with skin that is the colour the moon possesses in the thin air of northern winters. Pale, in other words.

Oh my, sorry. I am plagiarizing Stephen Marche in that moon sentence about skin and northern winters. It's from his much-lampooned profile of Megan Fox in the February 2013 issue of Esquire. And now, there's another one that might just top his. In the May issue of Vanity Fair, Lili Anolik writes about Scarlett Johansson, who stars in two upcoming movies, Captain America: The Winter Soldier and Under The Skin. Perhaps Anolik, who has written for the magazine before, felt that her gender gave her licence to write licentious descriptions of Johansson in a dress with a "boobalicious cut," looking good enough to eat. She enters the Jewel Suite of the New York Palace Hotel on Madison Avenue, takes in the scene of the photographers and the assistants and the assistants to the assistants (in a run-on sentence, natch), with the still-point of the goddess in the centre, and observes that the buildings in Midtown are thrust up out of the ground in "ecstatic phallic salute."

Maybe she thought she was being ironic. Or clever. Her revelation is that she, a woman, started to think like a man. "You know what I discovered happens when you're around a movie goddess made up to suggest movie goddesses past in the throes of a cover shoot, i.e., a movie goddess at the ne plus ultra of her movie-goddess-dom? You become a man, even if you're not one. You gawk. You gape. You leer."

And you should put down your pen, honey. Speaking as a woman, who will think like a man for a moment, I would be insulted that Anolik thinks all of us are lecherous pigs. She should go make herself some tea to calm down. She should remember that people will read this. Anolik had indicated that she had interviewed big celebrities before. (She was not a virgin, she said, coyly, in the continuation of her sexual metaphor.) She was trying to explain that celebrity and cover shoots are about seduction. Uh, really? Would that be because the photographers get the female celebrities to writhe around on cushions and pose with that open-mouthed, slack-jawed expression of porn stars? Anolik can't hold back though: "It's sex in public and it's sex in the mind. You can't resist her and she knows it without ever acknowledging that she knows it."

Well, there's one thing the reader knows when faced with this stuff, too, and it doesn't take many words to describe it. One, in fact, that I don't need to mention. 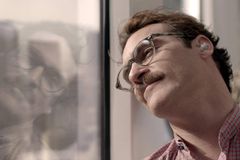