If you've ever stood near a red carpet when a celebrity passes by, you know that the lightning storm of camera flashes can be disorienting even if you're just looking on. So perhaps it's not surprising that the intense media glare reflecting off Justin Bieber seems to be scrambling people's notions of what constitutes calamitously bad behaviour, career implosion or whatever drastic narrative summary one prefers.

Mr. Bieber's appearance on Wednesday at a Toronto police station, where he submitted to a pre-arranged charge of assaulting a limo driver in December, acted on public perception like a match tossed onto a pile of well-primed barbecue briquettes. Just one week earlier, the singer had seen the inside of a police cruiser in Miami Beach, where he was apprehended for DUI and resisting arrest without violence. Surely these twin charges, and a year's worth of lesser scrapes and mischief, were signs that Mr. Bieber had run off the rails and swapped his golden-boy image for something darker and meaner.

The image has certainly changed, as it had to, simply because no one can sustain the role of the fresh-faced child star forever. The 19-year-old multimillionaire from Stratford, Ont., is very likely a spoiled teenager, a lousy neighbour – as some say in his gated California community – and a person whose taste for practical joking has a sharp edge. His various capers and public embarrassments are often embellished with some kind of substance abuse, however mild his marijuana habit may be by rock-star standards. But his current legal troubles seem less substantial the closer one looks, and the widespread, quasi-parental tut-tutting over the Biebs' minor mischiefs wouldn't be happening if we hadn't seen the shaky evidence on YouTube – and if he hadn't started out so cherubic.

The charges have not been tried in court, but the same intense scrutiny that has brought Mr. Bieber's failings to light has begun to raise questions about the cases against him. The manager of the Toronto limo company whose driver Mr. Bieber was charged with assaulting said recently that it was someone in Mr. Bieber's entourage, not the singer himself, who swatted the driver's head from behind. "Entourage for sure. I can confirm that," Steve Salem of VIP Limousines Toronto told the Toronto Sun. A chronology of Mr. Bieber's activities that day, assembled by Globe reporters, shows nothing out of the ordinary until that brief incident in the limo. There were no sightings at the Air Canada Centre, where Mr. Bieber attended a Maple Leafs game, of an addled public figure trading barbs with other spectators.

In Miami Beach, Mr. Bieber's blood-alcohol content at the time of his arrest turned out to be .014 – below even the "zero tolerance" level of .02 that, in Florida, constitutes legal impairment for a driver under 21. A reading that low means one beer at most. A toxicology report shows that THC (found in marijuana) was present in the singer's urine, but an exhaustive online analysis by Pennsylvania scientist-lawyer Justin McShane notes that the THC listed was a lingering inactive form and was thus "irrelevant" to the issue of impairment. The arresting officer's judgment of impairment was based on field sobriety tests that are notoriously subjective and are not accepted as evidence in many courts. It was also revealed that the police claim that Mr. Bieber was driving "50 to 60 mph" in a 30 mph zone was made visually while the officer drove in the other direction, and was contradicted by data from a GPS device in the singer's rented yellow Lamborghini, which recorded his speed during the encounter with police at 27 mph.

"Drag racing" at 27 mph in a yellow Lamborghini? What kind of rock 'n' roll mayhem is this?

The resisting arrest charge may be harder to defend, though there is a hazy line between resisting arrest without force and making a legitimate request to know why one has been stopped, as Mr. Bieber apparently did with a big dollop of attitude. Still, it's hard to see how being mouthy with a police officer amounts to dire career-killing misbehaviour.

Mr. Bieber continued to take care of business, which included preparing a new music video, Confident, for release on the very day of his visit to Toronto's 52 Division. Within 24 hours, it had been seen more than three million times, and doubled that count a day later. He posted a selfie video about it, possibly from his lawyer's office, which suggests he wasn't sitting with head in hands, bemoaning his fate. Yet some people found it amazing that he would go out to a Toronto club a couple of days later, instead of – what? Spending the night in church, praying for forgiveness?

Snotty, childish, thoughtless behaviour – yes, there's been a steady stream of that over the past year, though it's mostly of a kind that reveals a very tepid kind of bad boy, at least in comparison to the pre-YouTube excesses of Led Zeppelin and other rock lords of misrule. A year ago, a video emerged that showed Mr. Bieber peeing in a utility bucket in a restaurant basement, then scampering upstairs with his friends, yelling, "We're the wild kids!" A month later, German border security seized his capuchin monkey, whose papers were not in order. (The German government is still waiting for Mr. Bieber to pay upkeep for a pet he didn't go back to retrieve.) A report from September that Mr. Bieber, in the service areas of a Las Vegas hotel, had ridden a purloined bike down the hall while security scampered after him sounded endearingly like a scene from a Marx Brothers movie.

Stories of Mr. Bieber's poor neighbourliness have steadily seeped from the tony Calabasas area north of Los Angeles where he lives, and where the likes of former NFL star Keyshawn Johnson confronted him in May about his style of driving through the gated compound. (Mr. Johnson later said "it wasn't that big of a deal.") NFL Hall of Famer Eric Dickerson tweeted: "I live in Calabasas too and @justinbieber needs to slow his ass down."

The local friction culminated in a celebrated egg-throwing raid last month on the house of a neighbour whose profane voice-over on his own video of the event does not portray a man of Ned Flanders-style equanimity. Police raided Mr. Bieber's house over the incident, with helicopters floating overhead, but he hasn't been charged, and recently said he's ready to quit Calabasas. Perhaps he'll follow advice offered on Thursday by Miley Cyrus, who told talk-show host Jay Leno that her message to her pal was: "You've got a lot of money. Pay people to make sure you don't get in trouble, and party at your house. Buy a house and add a club to it."

Money may have to be paid to settle two lawsuits alleging rough handling by the singer (one from a paparazzo, one from a former security guard). If there's a serious drug in this story, it's not booze or "sizzurp," a cocktail of cough syrup and soda that Mr. Bieber is said to favour. It's money, that gives so many suddenly wealthy entertainers delusions of grandeur and irresponsibility that are quickly amplified by cellphone videos and social media. That's an especially hard drug to beat, because society says it's a great thing to have, and so few people are willing to give it up.

Is Justin Bieber planning to sell his L.A. home and relocate to wide-open spaces?
January 31, 2014 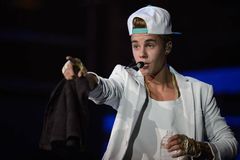 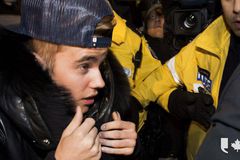 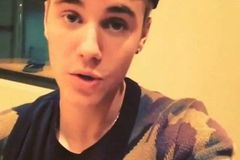 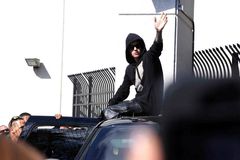 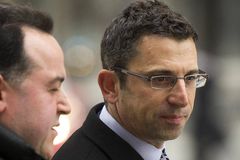 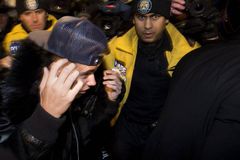 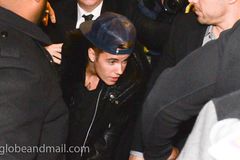 What Justin Bieber was doing an hour before surrendering to Toronto police
January 30, 2014 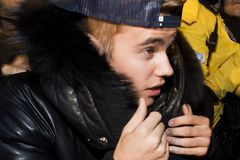