Apparently Justin Bieber's arrest in Miami was not the lowest the Canadian pop idol could sink. Less than a week later, Bieber finds himself in even more legal trouble, this time in relation to assault charges brought by police in Toronto, stemming from a December incident involving a limo driver. So what next? You can never tell with the Biebs, but a look back at his last few months of antics shows an increasingly worrisome level of bad-boy behaviour. 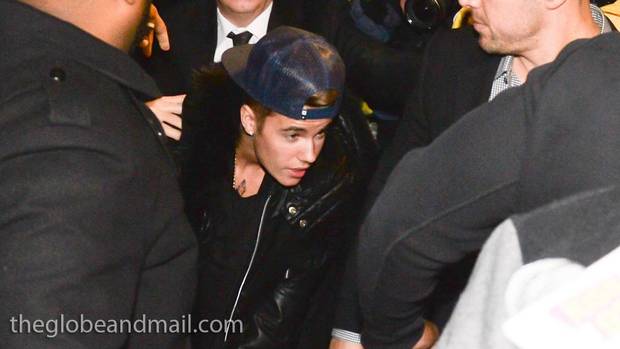 George Pimentel for The Globe and Mail

Jan. 29: On Wednesday night, the 19-year-old musician turned himself in at a Toronto police station and was charged with assault in connection with an attack on a local limousine driver. According to Toronto police, in the early morning of Dec. 30, a limousine picked up a group of six at a downtown nightclub. During the drive to a hotel, there was an altercation between the driver and a passenger, with a man striking the driver on the back of the head several times. The driver phoned police, but the man left before officers arrived.
Mr. Bieber had attended a hockey game at the Air Canada Centre the previous evening. 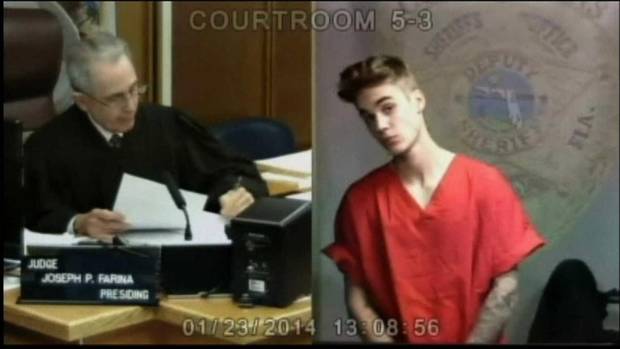 Jan. 23: Justin Bieber’s street cred got a boost after he and a friend, an R&B artist named Khalil Sharieff, were arrested and charged by Miami Beach police with driving while intoxicated following an early morning traffic stop for drag racing. Bieber faces three charges arising from the incident: resisting arrest, driving while intoxicated, and using a driver’s licence that had expired more than six months earlier. Sharieff faces a single DUI charge. Neither was charged with drag racing. The pair were arrested after a Miami Beach police officer pulled over Bieber’s yellow Lamborghini and found the pop star to have bloodshot eyes and a smell of alcohol about him. The arrest report further notes that Bieber had “a stuper (sic) look on his face. These are all indications of an impaired driver.” 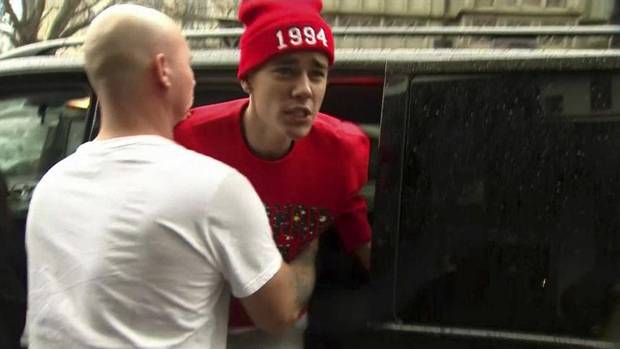 Is he addicted to 'sizzurp'?

Jan. 20: TMZ is leading the charge in unfounded claims that the Canadian pop star is “using drugs with alarming regularity” to the point where his handlers are now urging him to check into a rehab facility.

Citing several unidentified sources, TMZ alleges the primary drug being ingested by the pride of Stratford, Ont., is a little concoction known in rap circles as “sizzurp,” which involves the mixing of a prescription cough remedy with Sprite and a Jolly Rancher candy. 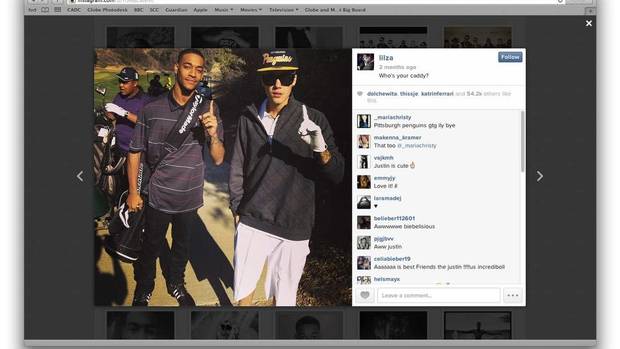 His sidekick is arrested

Jan, 14: A police search of teen pop star Justin Bieber’s California home in an egging vandalism case linked to the singer resulted in the arrest of a man after drugs were found in the house, the Los Angeles County Sheriff said.
Bieber’s pal Lil Za (real name: Xavier Dominique Smith) was arrested on suspicion of felony drug possession. TMZ.com published photos and video of Lil Za handcuffed and being led to a deputy’s car. 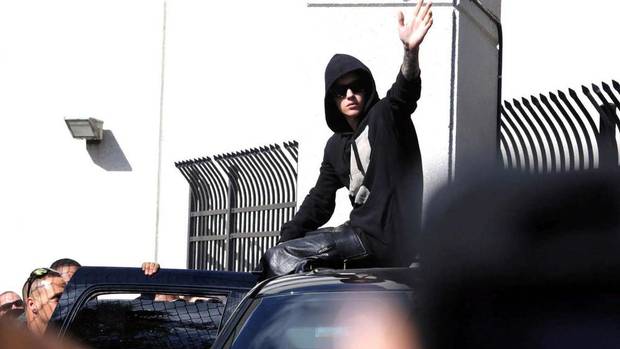 Jan. 9: How much damage could Justin Bieber have possibly caused when he allegedly threw eggs at a neighbour’s house? About $20,000 (U.S.), according to the neighbour. According to reports, the neighbour who accused the pop star of egging his house in the gated community of Calabasas, Calif., last Thursday night claims the entire front of his property now needs to be replastered and estimates the job will run $15,000, along with $5000 more to re-stain the doors.
Police responded to complaints from the neighbour that night. The neighbour, with whom Bieber has had previous run-ins, says the singer launched an all-out egg assault against him and claims he witnessed Biebs himself hurling eggs. 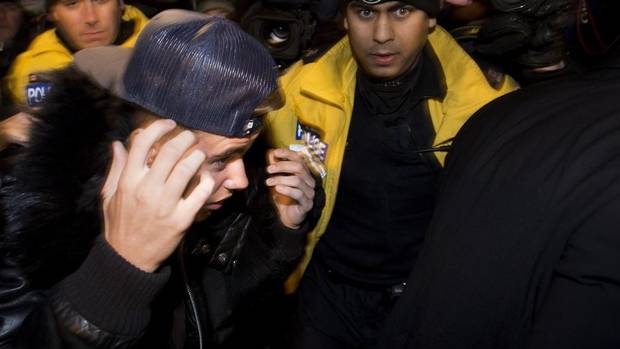 Member of his entourage first accused of assaulting limo driver

Dec. 29: His current troubles all began when Toronto police initially looked into allegations that a member of Justin Bieber’s entourage assaulted a limo driver who was driving the Canadian pop star and several others.

Const. Victor Kwong said at the time officers were called either late Sunday or early Monday to the area of Dundas Street West and University Avenue, but little else was known about the incident because investigators were still questioning witnesses.

He buys a bulldog puppy in Stratford

Dec. 27: How much is that doggy in the window? When you’re Justin Bieber, immediate pet-ownership gratification trumps price and sensibility.

As reported by E! Online, Canada’s pop export was visiting his hometown of Stratford, Ontario, for the holidays this week when he decided to stop by a local pet store.

Seemingly oblivious to the hubbub created by his on-again/off-again retirement rumours, Bieber was window-shopping with family members at Ruffin’s Pet Centre when he spotted an adorable American bulldog puppy.

And apparently it was love at first sight. According to a Ruffin’s employee, Bieber paid $600 for the adorable pooch, which came from a breeder. 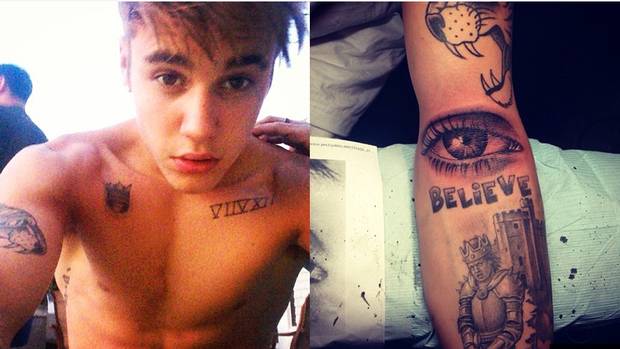 He claims to be headed for retirement

Dec. 18: During an interview with Los Angeles radio station KPRW (Power 106.1 FM, “where hip hop lives”), the pop star dropped a bombshell. Yup, he’s giving up – or so he says.

Naturally this left-field admission has roused the Internet. A 19-year-old superstar stepping away from the spotlight at the height of his career is basically unprecedented. And highly unlikely. 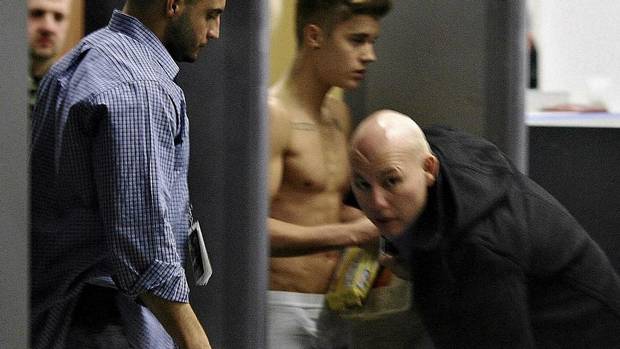 He sprays graffiti on an Australian hotel

Nov. 28: An Australian hotel is declaring itself a graffiti Belieber, despite being at odds with the city government.

QT Hotel in the Gold Coast said it gave Justin Bieber permission to spray graffiti on its wall. The Canadian singer and others posted images online showing cartoon faces in fluorescent paint on an outdoor wall at the hotel in Queensland state.

The Gold Coast mayor Tom Tate says the singer risked undermining the city’s efforts to fight graffiti. “The last thing we want is to have graffiti glorified and more young people thinking it’s a cool thing to do,” he said. 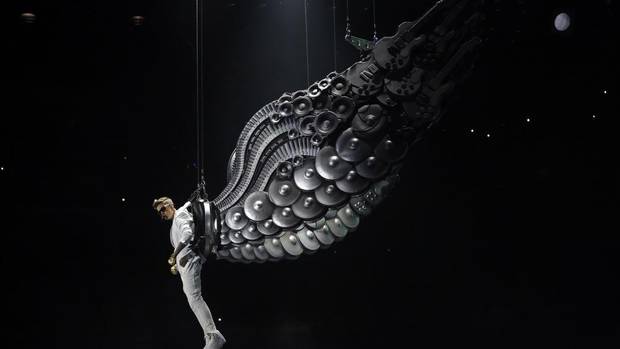 His alleged bedmate tells all

Nov. 12: Who would have ever guessed Justin Bieber is a love god in the sack? Gawker reports that Brazilian model Tati Neves has gone public about her alleged romantic interlude with the Canadian pop star, whom she describes as a “marvellous and unforgettable” lover.
Among other highlights, Neves told a Brazilian paper that Bieber was “very well-endowed.” Neves also said that when she departed Bieber’s room in the morning, she immediately received a voice mail from him asking her to come back, but she had to decline because she was “too tired.”

In the same interview, Neves said Bieber “looked great” naked and praised the 19-year-old singer for his “stamina” and “energy.” Apparently the term TMI isn’t widely known or used in Brazil. 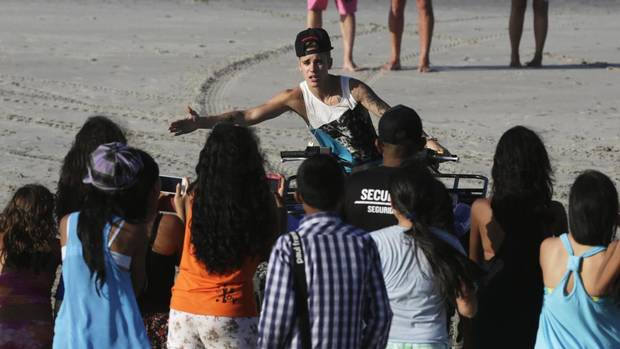 He did a lot of things in Brazil, Part One

Nov. 6: Currently into the Brazilian leg of his seemingly never-ending Believe tour, the 19-year-old Bieber is making headlines again for his erratic antics.
Item No. 1: According to The Daily Mail, Bieber is currently wanted by police in Rio de Janeiro for defacing a wall with graffiti.

Item No. 2: A video has surfaced showing Bieber mingling with devoted Brazilian fans, some of whom paid upwards of nearly $1,400 for a “meet and greet” with the pride of Stratford, Ont.  In the video, Bieber wears dark shades and doesn’t even glance at any of the star-struck fans, who waited for three hours for him to show up. No one was allowed to talk to Bieber. The fans take turns posing with the pouty pop star before each one is rudely pushed away by his ever-present security team. And then the meet and greet is over.

Item No. 3: While in Brazil, Bieber tried to reconfirm his reputation as a hardcore party animal and at one point was running around with 30 young women in his entourage.

Oh, and one more thing. According to the Brazilian press, Bieber allegedly tried to hire eight young women when he visited the infamous strip club Centaurus. And at this club, the word “stripper” is pretty much synonymous with “prostitute,” who charge a minimum of $1,200 for an overnight stay. In Brazil, prostitution is legal, but owning a brothel is not.

He did a lot of things in Brazil, Part Two

Nov. 4:  The Telegraph reports that the Canadian pop export recently enraged Brazilian fans by walking off the stage after an audience member threw a water bottle at him during a concert.
As can be seen in the video, the bottle knocked the microphone right out of Bieber’s hand. His response was to look briefly in the direction of the thrower and then turn and walk off the stage without saying goodbye or boa noite to his Brazilian fans.

All told, the Brazilian population doesn’t seem too impressed with Bieber, particularly after he was reportedly spotted sneaking out of an infamous brothel in Rio de Janiero.

Photos that appear to show Bieber wrapped in a bedsheet leaving the brothel known as Centauros have made front pages of papers all over Brazil.

Reportedly, Bieber spent more than three hours at the house of ill repute. His attempt at a covert exit didn’t work. Everyone recognized his bodyguards.

Oct. 1: It appears Justin Bieber is in no rush to dispel rumours of his diva-like behaviour.

Following inordinate media coverage of the Canadian pop export’s impetuous and irresponsible ways – vis-à-vis urinating into a janitor’s bucket, abandoning his pet monkey, spitting off a hotel balcony, getting into a nightclub brawl and so forth – Bieber took his diva game to a higher level this week when he enlisted his burly bodyguards to carry him up the Great Wall of China.