"I'm going to go sink into a long hot beauty bath now and try to erase the stink of a five-year marriage," Divine, as Dawn Davenport, tells her daughter Taffy, in John Waters's Female Trouble.

Did Katie Holmes say the same thing to Suri last Friday? Or is she too afraid of the reported phalanx of five big, male Scientologists allegedly tailing her?

The same day, Tom Cruise flew over Reykjavik in a helicopter, shooting a scene for his new film, Oblivion, clearly digesting the news of his wife having filed divorce papers the day before, in New York City.

The story had already exploded.

"Tom Cruise, Katie Holmes Divorcing Because They Couldn't Fake Being in Love Forever Plus She's Not a Dude": This Gawker headline, of many wry reports of the breakup, is exceedingly cynical, and cruel. And it is of a piece with the recent trash-media hounding, the outright bullying of Cruise's fellow Scientologist and suspected homosexual, John Travolta.

And, in the voice of pop's Gottfried Leibniz, Judge Judy, "If something doesn't make sense, it's usually not true." (This is usually barked by the distinguished judge, at an unctuous, shifty-eyed alimony withholder.)

Yet, none of Cruise's relationships make sense, least of all his relationship with us, off-and-on fans of the enormously gifted, completely bizarre actor's work since his spectacular leading-man debut in 1983's Risky Business.

In this film, he presented us with edgy, almost manic energy; the killer smile and purely, hotly homoerotic appeal that he would bring to so many of his films.

This heat comes with the famous white-underpants dance, choreographed to showcase maximum rear footage, and sexual moves that are physically appropriate to a man's stag party. (Stagette dancers as a rule don't get sweaty with long, phallic objects, as Cruise does in his living-room cabaret performance.)

And actors attempting to lure in the ladies do not spend an extended time in a male locker room, again, elevating and showcasing their asses to the camera while casually, suggestively, addressing a room of soaking-wet hardbodies – an unforgettable piece of queer cinema embedded in 1986's Top Gun.

Not all of Cruise's films are Honcho-licious, and even when they are, they appeal to women. Raunchy, large allusions to sex of any kind, in art, cross over the strangely fixed lines (gay and straight with bi filling) that our culture has long put forward.

But when Cruise does play with his queer persona, he is glorious, and Rock Hudson all over again. Not the anxious, closeted Hudson, but the hay-making, indiscreet, tongue-in-cheek Hudson, best showcased in Mark Rappaport's 1992 documentary, Rock Hudson's Home Movies, which isolates the playful cinematic dualism that is "macho Rock" and "homo Rock."

Arguably, the same is true of Cruise's films, but, sadly, "homo Tom" is rarely let out anymore, because of the near-constant hectoring and harassment the actor has had to endure for over 25 years.

If he is gay, what does it matter?

If his weddings were arranged by Scientologists, that is, a self-help religion that is predicated on a dead pulp writer's lunatic fantasies about alien overlords, does that make, say, Magnolia, a better or worse film?

Reclusive in the extreme, almost violently passionate about his beliefs, Cruise does not wish to share any aspect of his private life with us.

If he finally conceded that he was gay, and gave us a guided tour of his sexuality, would that be enough? Unlikely, because the mood around him is one of terrible anger, not curiosity.

Ostensibly because he's a liar, leading a double life in front of us – we who are exemplars in every way! More likely because he won't do what we want, and that is to let us call him gay all the time.

He won't, and he sues, because, like Liberace who sued too, he knows that, over and over, the suggestion he is gay comes in the form of a scurrilous, vicious epithet that has nothing to do with insisting he come out and everything to do with admitting, as one typical online poster put it, he's a "creepy disgusting faggot."

This may be troll talk, but how is it, essentially, different from the Gawker headline?

Cruise is an artist, and all that matters, all that must matter, is his work, which is loose and wild where sex is concerned; which teases all available viewers without discrimination.

In one of his best roles, as Dr. William Harford in 1999's Eyes Wide Shut, he plays an increasingly desperate voyeur, a sexually repressed, suspicious husband who, ultimately, surrenders to his raging desires. This Stanley Kubrick film, the director's last, best captures our obsession with the actor: our impatience and exhaustion with looking at him, expectantly, suspiciously, lewdly, only to have him never look back.

In other films, he just smiles and smiles.

He is the Cheshire Cat of American cinema, confusing, irksome, enigmatic: "How fine you look when dressed in rage," that inscrutable smile says. 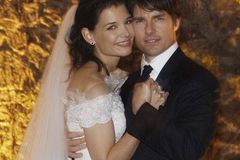