The age-old struggle of staying relevant in Tinseltown for women isn't going away any time soon. Just this week, Maggie Gyllenhaal came out as the latest victim.

In an interview with TheWrap Magazine, Gyllenhaal said she was denied a role due to her age, even though the male co-lead was 18 years her senior. That's right. At 37, she was told she was too old to play the love interest of a 55-year-old man. "It was astonishing to me," Gyllenhaal, who recently starred in the British mini-series The Honourable Woman, told TheWrap. "It made me feel bad, and then it made me feel angry, and then it made me laugh."

Gyllenhaal wouldn't name the film, but, really, does it matter?

Here are three other women who aren't letting their ages slow them down in Hollywood.

Arquette won the Academy Award for Best Supporting Actress for her role in Boyhood this year. The film, which follows a boy's life as he ages from youth to adulthood, was shot over almost 12 years. Arquette. plays the boy's mother and the audience sees her age along with her son.

As Salon points out, a disproportionate amount of praise surrounding her performance was related to her "bravery" for aging on camera.

Perhaps Amy Poehler put it best at the Golden Globes when she said, "Boyhood proves that there are still great roles for women over 40 – as long as you get hired when you're under 40."

After flying under the radar since 2010's My Own Love Song, 46-year-old Zellweger shocked with a new look when she stepped onto the red carpet at the Elle Women in Hollywood party last year. Tabloids compiled lists, comparisons and polls.

"Renee Zellweger's Face - Through The Years" is a photo gallery from TMZ.

"#ReneeZellweger turns 46 tomorrow," tweeted user @BJShea wrote a month ago. "She plans on going through the rest of her life with her eyes wide open. Thanks to her plastic surgeon."

The actress seemed unfazed by the media storm, however. "I'm glad folks think I look different!" Zellweger told People. "I'm living a different, happy, more fulfilling life, and I'm thrilled that perhaps it shows." You know what, Renée? So are we.

In a sketch filmed for Comedy Central's Inside Amy Schumer, Tina Fey, Patricia Arquette and Julia Louise-Dreyfus sit around a picnic table together, eating fancy pastries and celebrating the last day Louise-Dreyfus is sexually desirable (they use another word, but let's go with that). An innocent and naive Schumer stumbles into the scene and asks what's going on. The stars then explain the cruelties of aging that are unique to women in Hollywood. Here are a few of their tamer jokes.

"You know how Sally Field was Tom Hanks's love interest in Punchline, and then like, 20 minutes later, she was his mom in Forrest Gump?" asks Fey, poking at the rapid rate at which women age compared to male actors.

"Or, you go to a movie set, you go to wardrobe, and the only thing they have for you to wear are long sweaters, that cover you up from head to toe," adds Louise-Dreyfus.

At one point, Schumer asks when this last day of sexual desirability happens for men. "Honey, men don't have that day," laughs Arquette. 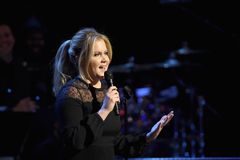 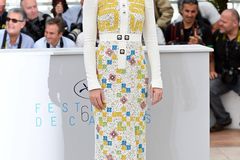