My husband has a problem with Trivago Guy.

"You find him sexy?" he wondered recently.

We had been watching some of the summer sports extravaganzas on TV – the World Cup, the British Open – and Trivago Guy kept popping into the room like a cottage guest who outstays his welcome. At every commercial break, it seemed, there he'd be in his unbuttoned rumpled shirt and beltless jeans, a middle-aged dude with a few days of stubble, pointing at little floating icons to explain the benefits of Trivago, a fast-growing hotel meta-search company.

Based in Dusseldorf, Germany, it compares more than 600,000 hotels across 200 booking sites in 47 countries and 23 languages.

As ad pitchmen go, he's an anti-pitchman, the opposite of slick but not quite benign or quietly average either. "He's so real you can practically smell the tobacco on the tips of his fingers," wrote a blogger on ScarletHeifer.com, a boutique ad consultancy in New York. Unvarnished reality in a pitchman is an idea in itself in Ad Land, a place with a limited diversity of people ranging from anodyne families to arch fantasy personalities like Mr.Clean and Captain Obvious.

But the response Trivago Guy has elicited is not just about his suitability as a television spokesman, it has something to do with male aesthetics. Middle-aged male aesthetics.

Due to little more than his appearance, Trivago Guy has spawned a social-media meme, including a fake Twitter feed, @trivagoguy. His beltless jeans have garnered much discussion and a parody or two. Some people have wondered what kind of middle-aged guy has such a small waist. (Trivago Guy is slim.) Others have speculated about his rumpled shirt: Could it be a rayon/linen blend? Why doesn't he button it up a bit more? And the baggy part of his jeans at his ankles causes some consternation. (Okay, that's my husband's peeve. "What kind of guy wears pants that are too long?" he scoffed.) Trivago Guy's worst crime seems to be that he's trying too hard to look young. "This is a guy who looks as if he has been photographing teenage models since his twenties. And he still hangs out with them. One thing I can tell you is that he's not interested in middle-aged women," my husband opined while pouring me a glass of wine and kissing me on the top of my head.

Could it be that middle-aged men are becoming subject to the same uncharitable judgment women of a certain age endure? Is there such a thing as age-appropriate rules for male dress and behaviour? A woman past 50 who works hard to look as if she's in her twenties (I'm thinking of you, Madonna) and behaves in a youthful way is labelled a cougar.

She's a threat, somehow. (Mothers, lock up your sons!) In short, it's considered suspect rather than cute to be girlish in later life.

But men, for the most part, have had a free pass. The definition of a creepy old guy meant a geezer in his 70s who hit on twentysomething women in a dark bar, not a fortysomething TV spokesman with stubble and green eyes.

Generally speaking, men could be boyish into their dotage (as long as they had hair on their heads) and would be considered endearing and attractive. This is why George Clooney will likely be riding his motorcycle into his 70s. And maybe that's why a part of me feels that Trivago Guy has a kind of cool, indie vibe, even though I will admit that he looks as though he could have just emerged from his car, where he has been sleeping, after a three-day bender. (Hey, he's a bad boy who needs a room!)

Whether that's the kind of guy you want to bump into in the lobby of your next hotel is another thing, of course. As someone noted online, "How can they offer to sell a comfortable room with a hot shower when the spokesperson looks like he bathes in the East River?"

Good or bad, Trivago Guy has people talking, which is a measure of successful advertising campaigns. In 2013, Expedia acquired a majority stake in Trivago for €343-million ($564-million) in a bid to boost its corporate travel portfolio in the competitive online marketplace.

"We wanted to let viewers know how simple our website is to use,"

Trivago's marketing spokesperson said via e-mail. "Who better to help us spread that message than the laidback and endearing Tim Williams?"

Yes, Trivago Guy has a name.

Williams is a 47-year-old actor/ musician who lives in Berlin.

"The Trivago Guy. Crazy, huh? Who would have thought?" he wrote to me in an e-mail exchange.

"I have been propositioned," the twice-divorced father of two boys added. But he wasn't offended.

Born in Houston, Tex., Williams worked as an actor for several years in New York, appearing "off off off Broadway" and in episodes of The Sopranos and Law & Order. An English-language German romcom, In Search of an Impotent Man, in which he played the lead, took him to Germany in 2001. The direction for the Trivago commercial, Williams explains, was "basically to be real." Of the response to it, he says only that "something happened somewhere and I'm not sure where." And then he adds, "Oh, MY BELT [his caps]. Just so EVERYONE knows, there is and are stylists all the time around you while you shoot a commercial."

I made sure to tell my husband. 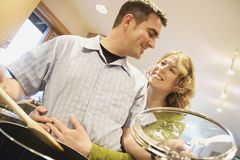 The naked truth about bare male flesh
February 18, 2012
Follow Sarah Hampson on Twitter @Hampsonwrites
Report an error Editorial code of conduct
Due to technical reasons, we have temporarily removed commenting from our articles. We hope to have this fixed soon. Thank you for your patience. If you are looking to give feedback on our new site, please send it along to feedback@globeandmail.com. If you want to write a letter to the editor, please forward to letters@globeandmail.com.
Comments