Oh, Justin Bieber, you incurable Canadian romantic. Why did you post and then immediately delete a photograph of you and former girlfriend Selena Gomez yesterday?

To the chagrin of young female Beliebers worldwide, the Canadian pop star quietly posted, and then deleted, a rather personal photograph of him posing with Gomez to his Instagram account on Wednesday.

In the stark black-and-white image, Gomez is shown cradling Bieber's head while looking directly into the camera.

And the Biebs' (temporary) caption for the photo: "Our love is unconditional."

All together now: awww.

Of course, this isn't the first time Bieber has gone onto Instagram to express his random affection for the former Wizards of Waverly Place star.

Three months back, out of the blue, Bieber posted a picture of Gomez taken at the Vanity Fair post-Oscar party in Hollywood to Instagram, along with the caption, "Most elegant princess in the world."

To briefly recap the couple's sporadic romantic history, Gomez and Bieber began dating in early 2011 but allegedly pulled the plug on their relationship last fall.

Since then, the former couple have kept their distance from each other, though they were spotted together at the Coachella Festival in April.

According to Bieber's rep, he was at the music festival to show support for fellow musical artist Jhené Aiko.

But yesterday's Instagram overture by Bieber – which he deleted within an hour of posting – seems to run contrary to his more recent romantic escapades.

Just two weeks ago, the Internet ran white-hot with reports that Bieber was canoodling with newly single supermodel Adriana Lima at the Cannes Film Festival. An unnamed source told Us Weekly: "Justin pursued her hard."

It's worth noting that one day after stories of the alleged Bieber-Lima hookup went public, Gomez went on Instagram to post a picture of her posing in a bikini accompanied by the caption: "Taking my power back."

So there you have it: Two attractive, successful and seemingly star-crossed youngsters being kept apart by their mega-celebrity status.

And one last thing, Justin: The next time you want to reach out to your princess, you might want to just send flowers instead.

Dave Chappelle has finally cleared up a longstanding misconception: He did not abruptly quit his acclaimed series Chappelle's Show in 2006. "Technically, I never quit," he said on Late Night with David Letterman this week. "I'm just seven years late for work." For the first time, the 40-year-old comedian talked about his self-imposed exile from show business that began with an extended trip to South Africa. "It was like living in the corner of perception and reality," said Chappelle. "It's a weird place to be. When everyone thought Wesley Snipes was in jail, I saw him at a party."

Being part of the TV family on Party of Five didn't teach Neve Campbell a thing about motherhood. The Canadian-born actress, who gave birth to son Caspian in 2012, recently mused that her six-season run on the Fox drama series was a unique situation. "Our parents were dead [on the series]," she said. "Party of Five was good for family values. In that sense, it taught me a few things." In the same interview, the native of Guelph, Ont., admitted that being a mom does have its advantages. "There's so much that's so beautiful," she said. "Waking up to him every morning with that smile and innocence and creative energy is beautiful."

If you're willing to donate $20,000 (U.S.) to a good cause, George R.R. Martin will immortalize your name in the next Game of Thrones book. The bestselling author recently signed on for a campaign raising funds for the Wild Spirit Wolf Sanctuary and The Food Depot of Santa Fe. How it works: The first two donors pledging $20,000 to each cause would have a character named after them in an upcoming Song of Fire and Ice novel. According to the Hollywood Reporter, two $20,000 donations were submitted within hours of the campaign being posted on Facebook. Better still: An additional eight $20,000 donors signed up.

Sony Pictures is banking that the public will go see a movie based on the nineties video-game sensation Sonic the Hedgehog. Earlier this week the Hollywood studio announced plans to mount a Sonic movie, which will reportedly be produced by 22 Jump Street producer Neal H. Moritz. A statement accompanying the announcement said, "The film will look to capture Sonic's irreverent tone and spirit, reuniting him with some of the most revered and infamous characters of the franchise, including the evil Dr. Eggman." Since Sega first introduced Sonic in 1991, the character has sold more than 150-million video games worldwide.

Robin Thicke is pulling out all the stops to win back his estranged wife. The Blurred Lines singer has announced that he will title his next album Paula in honour of Paula Patton, his actress wife from whom he separated earlier this year. The album, which is due out July 1, will include the single Get Her Back, which Thicke performed at the 2014 Billboard Music Awards last month. Thicke and Patton separated in February after nine years of marriage. The couple have one son together.

new
Justin Bieber being investigated in connection with an alleged attempted robbery
May 14, 2014 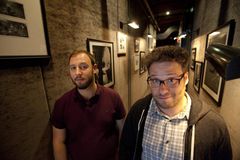