Women everywhere will be relieved to learn about a light at the end of the big 4-0 tunnel, a sweet spot on the journey to middle age, a beacon of hope in a life otherwise doomed to decrepitude and decay.

The age of 42 is officially sexually alluring, says Esquire Magazine, an expert in all things when it comes to objectifying females.

It should be noted that despite the unisex name my newfangled parents gave me, I am most ardently female. Unfortunately for me, I am also more than several years shy of the awesomeness reserved for women of 42. But, on behalf of women of all ages, I'd like to thank the author, Tom Junod, for shedding light on the fact that 42-year-old women - even the most beautiful -no longer have to worry about being unfortunate tragedies.

What an overnight success story, a triumph for women who worry about keeping the wrinkles at bay. If you are 42, someone might still want to sleep with you.

It's quite a revelation because, until recently, a woman in her early-mid forties was only valued by society for pumping out children, notes Junod. Now that same woman can reclaim the traits she bid adieu to with her fading youth, namely beauty and sex appeal. Quit your day job, put on a negligee, fry up the bacon your hubby brings home and feed it to him. You're simply wasting your adorable time with everything else you think is important.

Junod compares modern day 42-year-old ladies with the song-inspiring Mrs. Robinson portrayed by Anne Bancroft in The Graduate: "a movie that turned on the hero's disgust with himself for having an affair with a forty-two-year-old woman." Junod explains that this movie couldn't very well be remade because no one would "feel sorry" for the character who could (fictionally) score with a modern starlet of the same magical age.

It's news to me that anyone would pity the guy who snagged Bancroft, even if she had reached 86, that glorious age that was twice previously celebrated in earlier editions of Esquire's arbitrary age-honouring mumbojumbo. Really, is there anyone who can remove a pair of silk stockings with quite Bancroft's grace?

Cameron Diaz is Esquire's cover model next month and she fits in the ideal age bracket. Junod also congratulates Sofia Vergara, Leslie Mann, Amy Poehler, Carla Gugino, Christina Applegate, Jennifer Garner and Maya Rudolph for being members of the sexy-again-at-last club. (Poor Gwyneth Paltrow! Shockingly, she is just a few months shy of being the perfect sexy age, and that's so unlike her; she's is normally so on top of perfection. No need to worry, if she keeps up with the Pilates and the detox diet she will enter the ranks of the middle-aged elite this September.)

The force responsible for this transformation? "It is feminism that has made forty-two-year-old women so desirable," explains Junod. Indeed, feminism at its very core is about empowering women to reactualize their role as sexual ornaments in magazines for men.

Ladies, please beware, however, of what lies beyond this special milestone. It remains unclear what will happen to all 42-year-old stunners when they enter the nebulous unknown that is 43. Let's proceed with caution into the darkness of our old age.

Lady Gaga met one of her most inspiring fans after performing at the Air Canada Centre in Toronto. The pop star learned about the "Little Monster," a 10-year-old blind brain-tumour survivor named Avery Fournier, from the media. At a meet-and-greet following Lady Gaga's Wednesday show, the Chatham, Ont., girl was the first fan to get a hug from the Poker Face-singer.

A little video from Fourground Film, a St. Catharines, Ont. production company, is getting a lot of attention on YouTube. Everyday Football Fouls is two-and-a-half minute spoof video that shows ordinary people overreacting with the same drama from soccer players to supposed fouls on the field. In just a few days, the video has received almost two million views.

The week isn't getting easier for Selena Gomez. After on-again off-again boyfriend Justin Bieber was spotted hanging out with a younger model, the former Disney star posted a message on Instagram to say that she had learned comparing herself to others only makes her weak. Gomez was also seen wearing cleavage-revealing clothing, which had gossipmongers speculating whether the 21-year-old had a boob job.

People, Steven Spielberg did not murder a dinosaur. An Ohio-man named Jay Branscomb posted a satirical image of the Jurassic Park director in front of a mechanical Triceratops on his Facebook page, only days after Facebook removed images of teenage safari hunter Kendall Jones posing with slain endangered animals. The photo was shared over 33,000 times with many disgusted commenters not catching the joke. 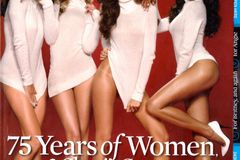