Leonardo DiCaprio may have been denied – again – an Oscar statuette, but his reaction to losing the prize is still making waves on social media. The Wolf of Wall Street star lost out in the Best Actor category last night to Matthew McConaughey of The Dallas Buyer's Club. Within minutes, the hashtage "#PoorLeo" was trending on Twitter as users alternated between sympathizing with the actor or poking fun at his bad luck. DiCaprio, 39, has been nominated on four occasions for an Oscar, starting with his 1993 supporting actor nod in What's Eating Gilbert Grape?, followed by nominations for The Aviator and Blood Diamond.

It turns out rumours of Jennifer Lawrence's hiatus from the acting profession have been greatly exaggerated. In light of veteran movie producer Harvey Weinstein's recent comments that Lawrence "was going to have a long break for a year where she won't do anything," the 23-year-old actress set things straight on the Oscars red carpet. "That's just Harvey being an idiot," Lawrence told a reporter from MTV News on Sunday night. "He's not being an idiot, I don't know. I would like to take a year off, that would be a dream." Lawrence is currently shooting her final scenes for the third entry in the Hunger Games film franchise titled The Hunger Games: Mockingjay – Part 2.

Are director Steve McQueen and Oscar-winning screenwriter John Ridley having a feud? When Ridley's name was announced as winner of the Best Adapted Screenplay for his efforts on 12 Years a Slave at the Oscars on Sunday night, 12 Years director McQueen was shown sitting in the crowd stone-faced and offering up less-than-enthused applause for his creative collaborator. And wasn't it a bit telling that Ridley forgot to thank McQueen during his acceptance speech? Gossip columnist Nikki Finke picked up on the aloofness between the two men and posted the tweet: "My sources attributing John Ridley-Steve McQueen cold shoulder at Oscars tonight to dispute over screenplay credit." Currently, 12 Years a Slave, based on the book of the same name by Solomon Northup, features Ridley's name as sole screenplay author.

British actor Benedict Cumberbatch was more playful than a month-old puppy at Sunday's Oscars broadcast. The Sherlock star's antics on Oscar night are making the rounds on Twitter and other social-media sites courtesy of his decision to photo-bomb the world's most famous rock group. When the members of U2 and their respective spouses posed for a photo on the red carpet, Cumberbatch snuck behind the group and raised both hands to the heavens. Within hours of the photo being taken, several Tumblr users had already taken the actor's jubilant pose and placed it into other photos for comedic effect. Among them: The infamous "Red Wedding" scene from last season's Game of Thrones and the fight scene from The Avengers.

Ellen DeGeneres was happy to turn the Oscars broadcast into a commercial for Samsung, but her heart still belongs to the iPhone. The Samsung corporation paid an unspecified sum for DeGeneres to plug their new Galaxy phone during the Oscars broadcast, which resulted in the now-famous selfie featuring DeGeneres, Bradley Cooper, Jennifer Lawrence and other celebrities that broke the Twitter record for most retweets (more than two-million and counting). But 12 minutes after snapping the selfie, DeGeneres switched back to her iPhone to post a picture of Oscar-winner Jared Leto, along with the comment, "So handsome. He's on my live show tomorrow. I love Jared Leto."

Inside the Vanity Fair party: Face to face with Ellen
March 3, 2014 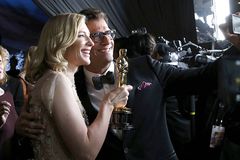 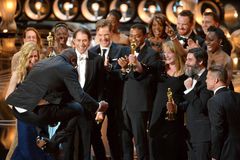