The brothers of the late actor Paul Walker will pitch in to help film the final sequences for Fast & Furious 7. The producers of the upcoming action feature announced in a Facebook post that Walker's brothers, Caleb and Cody, have agreed to film any remaining scenes featuring their brother. Walker had already wrapped his dramatic scenes before his death in a car accident last November, but some action sequences still have to be filmed. "We have resumed shooting and now welcome Paul's brothers, Caleb and Cody, into our 'Fast' family," said the Facebook post. Fast & Furious 7 was originally slated to hit theatres this summer but the studio has pushed the release date back to April 10, 2015.

Miley Cyrus cancelled a concert in Kansas City this week after suffering an allergic reaction. The singer and former Hannah Montana star was hospitalized on Tuesday for a severe reaction to antibiotics, according to a release from the organizers of her current Bangerz tour. Cyrus has been placed on medical rest by her doctors and is currently unable to perform as scheduled. Last week, the 21-year-old singer cancelled a show in Charlotte, N.C., because she had the flu.

Super-couple Beyonce and Jay Z will share the stage for a stadium tour this summer. The married-in-real-life couple are expected to announce plans for a collaborative 20-date tour that will start in late June and include a performance in New York City on July 4. Bey and Jay recently wrapped separate tours in support of their respective albums. The couple memorably performed the song Drunk in Love together at the Grammy Awards in February.

COURTNEY VS. THE BOSS

Don't look for Courtney Love in the front row of a Bruce Springsteen concert. The Hole lead singer and widow of Nirvana frontman Kurt Cobain is getting attention for a clip from her ongoing YouTube series Courtney Love On…, in which she speaks disparagingly of the New Jersey-born rock icon. Love's main beef: "Saxophones don't belong in rock n' roll… They just don't belong." Typically, Love reversed her opinion in the same chat by saying about Springsteen, "I really like him. He's a nice guy."

Unlike his Mad Men character of Don Draper, Jon Hamm is in complete control of his emotions and is even willing to share them with Muppets. The actor showed up this week on the children's program Sesame Street to school the popular Muppet character Murray on human emotions, like, say, guilt. "It means you feel sad because you did something that you shouldn't have done… It's not a very good feeling," said Hamm. In the segment, Hamm also explains "frustrated" and "amazed" for his furry friend and demonstrated his expertise with the alphabet.

Aerosmith frontman Steven Tyler says he once lectured Guns 'N' Roses on the evils of drugs. The former American Idol judge recalled a time in the early nineties when his band was scheduled to kick off a concert tour with Guns 'N' Roses. Tyler says he was trying to stay sober at the time and told singer Axl Rose and his bandmates, "If you guys whip something out in the dressing room, I'm gonna wanna use it – and if I do, you're off the tour." The result: "It went like that for a minute and then, of course, you can't stop anything."

Now Trending: Sunglasses worn by Paul Walker on day he died put up for auction
March 13, 2014 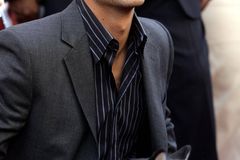 How generous was Paul Walker? Read about the actor's gift to one lucky couple
December 5, 2013 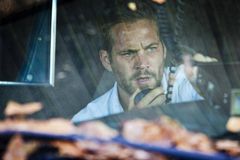