Turia Pitt is breaking restrictive fashion standards in the best possible way. The burn survivor, who has scars on her face and lost several fingers to the fire, is the newest cover model for Australian Women's Weekly.

Pitt was caught in a bushfire and suffered burns to 64 per cent of her body while she was competing in an ultramarathon in Western Australia three years ago. Doctors said she had only a small chance of survival, but she made a remarkable recovery. The 26-year-old was a model and mining engineer before the bushfire, but she has since added inspirational speaker and author to her resume.

Australian Women's Weekly chose Pitt to be the cover model for the July issue "because she is quite simply one of the most impressive women you will ever hope to meet."

Pitt said she is honoured and humbled by the opportunity. "For me, it sends the message that confidence equals beauty. There are a lot of women out there who are so beautiful but don't have the confidence, and that's what gets you over the line," she told the magazine.

A helicopter crew rescued Pitt and three other runners from the flames in 2011, reports the Daily Mail. Kate Sanderson, another female runner rescued from the fire, also suffered extensive burns and lost a part of her foot. Both Pitt and Sanderson were given about 450,000 Australian dollars (about $452,000 Canadian) by the government of Western Australia. The two male runners who were rescued did not receive the same financial gift.

The Guardian reports that Pitt reached a $10-million dollar settlement in May with Racing the Planet, the company that organized the 2011 race.

Robert De Niro stopped in at a stranger's house to watch a World Cup game yesterday. The actor is in New York filming The Intern, but took a break at noon to watch USA play Germany in Brooklyn's Cobble Hill neighbourhood. It seems that Warner Bros. tried to set up a private screening for The Godfather star by asking the inhabitants of an apartment building for permission to put a satellite on their roof – but the Rain Man found a spot to watch the match at a house in the neighbourhood.

Less than two years ago she had that lipsyncing disaster on Saturday Night Live, but no one is cringing at singer Lana Del Rey any more. Her new album Ultraviolence earned the No. 1 slot on the Billboard 2000 chart this week. She's also sold more albums in a week (182,000 copies) than any other female artist so far this year. Now if only she would refrain from invoking the Twitter-rage of Frances Bean Cobain, daughter of late Nirvana singer Kurt Cobain, by making strange comments like: "I wish I was dead already."

Courteney Cox is definitely more than friends with Snow Patrol rocker Johnny McDaid. The 50-year-old Cougar Town actress announced her engagement to the 34-year-old Irish rocker by posting a selfie with him on Twitter last night. Cox and McDaid worked together on the film Just Before I Go but have only been dating for six months. The actress ended her 14-year marriage to actor David Arquette last year.

It's not easy being queen. Amanda Longacre, 24, was Miss Delaware for less than two week before being stripped of the title because she is too old to compete for Miss America. Contestants must be between the ages of 17 and 24 to be eligible to compete at the national pageant in September, but the beauty queen will turn 25 in October, a month after the pageant. "Now I have lost everything: my scholarship money for school, my prizes and my crown – all because of a technicality that was not caught by the executive board," Longacre said, before breaking into tears. 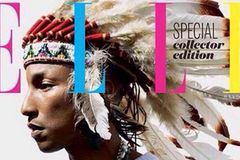 Dear Internet: Kim Kardashian and Kanye West are on the cover of Vogue – and that’s okay
March 21, 2014