Artist reaches superstar status, works at frenzied pace, starts acting out bizarrely, gets mocked mercilessly for being a prima donna, the publicity and media scrutiny generates more outbursts, the artist has a public breakdown and is hospitalized.

Stop me if you've heard this one before.

From Britney Spears to now Kanye West, these stories have played out in the public spotlight many a time. But beyond the gossip, what lessons should we learn from these sad spectacles?

First and foremost, that anyone can fall prey to mental illness. No amount of fame, money and self-confidence can completely shield someone from illness, be it mental or physical.

That being said, we should be careful to not fall prey to the temptation to diagnose West from afar. Over the years, the rap artist has developed a well-deserved reputation as an egotistical ass. But this is not necessarily the result of mental illness.

There is a broad range of people in the world, and some have more abrasive personalities than others. Yet something clearly went wrong in recent days, judging by West's behaviour at concerts and his hospitalization.

To date, the terms "spiritual crisis," "sleep deprivation," "breakdown" and more have been bandied about to describe his state of mind. What the final diagnosis will be, if any, remains to be seen.

Regardless, we should remember that the symptoms that West suffered leading up to the crisis – sleep deprivation, hypomania, lashing out, paranoia, ranting, exhaustion and (if insider reports are accurate) psychosis – happen to a lot of people.

Mental illness stems from a combination of genetic and environmental factors, and triggers such as the death of a loved one and sleep deprivation. Many people spiral downward until they hit a crisis point, but few do so as publicly as West has.

The pattern we've seen in his behaviour leading to this hospitalization is eerily similar to that of Britney Spears in 2007. The singer shaved her head, attacked paparazzi with an umbrella and much more before being committed involuntarily to psychiatric treatment.

Spears also saw her marriage break down, lost custody of her children and her father was appointed conservator of her assets while she was being treated for bipolar disorder.

One can only hope that West does not have to plumb those depths before bouncing back. Because, like Spears, West will very likely get better; we should not forget that the vast majority of people with mental illness recover and thrive.

Will he be as creative and successful? That's hard to say.

Many noted that West worked obsessively on his latest album, The Life of Pablo, in a manner that is reminiscent of Brian Wilson's approach to the Beach Boys album Smile. Wilson suffered from what at the time were described as "nervous breakdowns" and drug abuse and, at one point, was diagnosed with schizophrenia. He became hermetic and self-destructive, and after years of questionable treatment, he began a slow return to normality.

What we have to avoid is embracing the hoary myth that artists are invariably mentally ill, and that creativity requires existential suffering.

"The romantic notion that if you're creative you're 'crazy' is quite simply wrong," said Dr. David Goldbloom, a professor of psychiatry at the University of Toronto who has studied the link between creativity and mental illness.

But, if the artistic have one advantage, it is perhaps that they are better at articulating their suffering.

West did so in the lyrics of the song I Feel Like That, where he rapped:

"Do you experience nervousness or shakiness inside, faintness and dizziness? The idea that someone else can control your thoughts. Feeling others are to blame for most of your thoughts. Trouble remembering things, feeling easily annoyed and irritated. Feeling afraid in open spaces or in public. Thoughts of ending your life. Feeling that most people could not be trusted. Poor appetite, heart or chest pains? I feel like that all the time."

The clues were there, but was anyone truly listening? 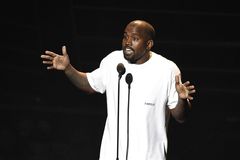