Eaten in many countries, especially developing nations, because of its versatility and accessibility, goat is one of my favourite meats to cook, as it takes on the flavours of Indian spices extremely well. Eating it with a piece of a naan reminds me of the small lanes of Old Delhi, which I would sneak into as a young boy to enjoy a plate of spicy stewed goat meat in the middle of the afternoon. Going there was considered a little risky because the area's reputation for skirmishes. But the hustle and bustle of the bazaar and the flavour of that goat meat stewed with spices made it worth the risk.

The following recipe is based on my memory of those long-ago stews. I love spending a Sunday afternoon chopping, mixing and getting my prep done for this dish. I put on some Bollywood music and sing along. Although I have toned down the spiciness a little bit for the North American palate, this is a rich meal and robust of flavour, so be prepared to sweat a little bit.

1 cup plain yogurt (as fatty as you can get)

For the goat, combine ghee (or butter), salt, goat meat and water in a large pot on medium high heat. Stir regularly for 10 to 15 minutes or until the meat is browned and begins to release its juices. Cover and reduce heat to low, then cook for 1 1/4 hours, stirring every 15 minutes. The goat meat and bones will release water and should not stick to the bottom of the pan. If the meat is sticking, add 1/2 to 1 cup more water. While the meat is stewing, make the masala in a separate pan.

For the masala, heat oil to medium high for 1 minute in a large pot. Add cumin seeds, cloves, cinnamon and black cardamom, stir and allow cumin seeds to sizzle for 30 seconds; stir in the onion and sauté for 7 to 8 minutes or until crispy brown on the edges.

Place yogurt in a small bowl. To prevent curdling, spoon 2 to 3 tablespoons of the hot masala into the yogurt. Stir well, then pour the yogurt mixture into the pot of masala. Sauté masala for another 2 minutes. Then stir in the water, increase the heat to high and bring to a boil. Cover, reduce the heat to low and simmer for 10 minutes. Turn off the heat.

After goat meat has stewed for 1 1/4 hours, remove a piece from the pot, allow it cool for a minute and pull some meat off the bone. If it pulls off easily and is tender, remove the pot from the heat. If not, cook for another 15 minutes. Once the meat is cooked, turn off the heat and let it sit on the burner for 20 to 30 minutes.

Just before serving, heat curry on medium to high heat and bring to a boil. Add blueberries. Stir and reduce the heat to medium, cover and simmer for 10 minutes. Serve with naan or rice.

Vikram Vij is owner of and chef at Vij's in Vancouver.

Here's a dish to challenge the rule that red meat should be paired with red wine. Let the sauce, not the protein, be your guide. Gewurztraminer, a white wine, especially one from France's Alsace region, would work nicely. Alternatives include viognier and Australian semillon. If you prefer red, try an Australian shiraz, many of which offer up enough fruity concentration to match the sauce while also rising above the spice of the curry and goat's gamey flavour. 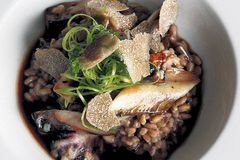 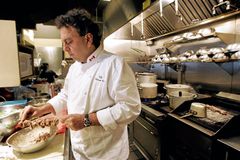 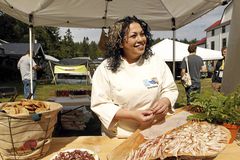