My birthday falls in the middle of apple season so naturally as a kid I insisted on apple pie instead of cake. My mom was an awesome baker and only too happy to oblige. She wasn't too happy, though, the first time she found me eating the entire pie - before the party. The next year, there were two pies. One for breakfast, the other for the party. Today the tradition endures, but this year I may have already reached my limit.

A few weeks ago, I was asked to judge a pie-baking contest at Applelicious, the Prince Edward Island apple festival. A dozen local bakers had put their reputations on the line and there was big prize money at stake. Naturally the judges and I took our job very seriously. We tasted analytically, we poked and prodded methodically. We ate way too much pie.

After staggering to the stage and announcing the winner, a desperate event organizer approached me. "Would you be interested in entering the apple pie eating contest?" I had serious doubts about my belly's ability to absorb any more but I picked up my fork. I put on my game face, peeled off the crust with one hand and tackled the filling with the other. Fortunately, it was delicious. But by the time I could even imagine conquering the crust, I was dusted by a 12-year-old bent on apple pie supremacy. As he did his victory lap, though, I noticed another kid with a gloomy look in his eyes. He wasn't allowed to eat apple pie, as he had a gluten allergy.

An intolerance to gluten in wheat flours (a.k.a. celiac disease) has become one of the leading food allergies in North America. Once considered rare, this chronic health disorder is now a mainstream influencer. Shouldn't everyone be able to have at least a slice of apple pie? I think so.

Preheat oven to 350 degrees. Whisk oats, almond meal, brown sugar and salt together in a large bowl. Add butter and mix well until evenly combined. Add water and stir until mixture forms a cohesive dough. Knead once or twice to gather up any extra dry ingredients. Add a few more drops water if needed. Divide in half and form into 2 flattened discs, one slightly larger than the other. Wrap in plastic and refrigerate until firm and ready to use (at least one hour). Toss the apples with the brown sugar, cornstarch and cinnamon.

Using rice flour, dust your hands, the work surface, the roller and the dough, then roll the larger pastry disc out into a 12-inch round and fit it into an 8-inch pie plate. You will find the dough easy to work with but also easily torn, so patch as needed. You may find it easy to fold the disc into quarters than pick it up and unfold it over the pie plate. Add the apples.

Roll out the other disc into a 12-inch round and place over top of apples. Trim and seal edges of pie and poke 3 or 4 vent holes into the top of the pie so that steam will be released and not blow out the crust. Place onto the bottom rack of the oven and bake for 1 hour or until the crust is golden and juices are bubbling.

TIP: Wheat flour lends flavour, mass and critical strength to normal pie pastry, replacing all three factors is one of the challenges in wheat-free cooking. Rice flour is a common substitute but in pastry its grainy blandness is a liability. Try almond meal: It's not as strong as wheat flour but it's much tastier.

Michael Smith is the author of Chef at Home and host of Chef Abroad on the Food Network.

Sauternes, the sweet wine from Bordeaux, works well here. Equally good would be a late-harvest wine from Canada, especially a late-harvest gewurztraminer. If you choose to serve the pie heated with vanilla ice cream, consider veering away from wine and trying a spirit, such as aged rum or bourbon, or a slightly sweet cocktail. One option: mix one ounce of bourbon with half an ounce of amaretto liqueur (from Italy) and serve over ice. A raisin-like, sweet Oloroso sherry would also be nice. 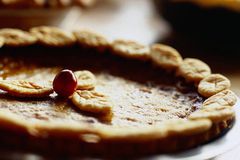 Chef Michael Smith's recipe: whole-grain pancakes
November 4, 2009
Follow us on Twitter @globeandmail Opens in a new window
Report an error Editorial code of conduct
Due to technical reasons, we have temporarily removed commenting from our articles. We hope to have this fixed soon. Thank you for your patience. If you are looking to give feedback on our new site, please send it along to feedback@globeandmail.com. If you want to write a letter to the editor, please forward to letters@globeandmail.com.
Comments