First there was molecular gastronomy, the chemistry-set cooking movement that gave us parmesan foam, fruit-juice "caviar" and Rice Krispies paella.

Now, thanks to a Quebec sommelier, there's molecular wine pairing, a hard-core, science-based approach to matching grub and grape.

Having roast lamb? Don't waste it on an ill-advised red Bordeaux, the old standby trotted out by generations of sommeliers. Lamb's characteristic flavour comes from thymol, an aromatic compound found in the oil of, yes, thyme. It's also a flavour note associated with red wines from the southern Languedoc region of France, such as Minervois, Corbières or St. Chinian.

"If you have aromatic molecules from the same family, when they come together, it's greater than the sum of its parts," says François Chartier, whose new book, Papilles et molécules (Tastebuds and Molecules), is in its second printing just six weeks after publication.

If Catalan superchef Ferran Adrià is the leading missionary of molecular gastronomy, Mr. Chartier is his counterpart with a corkscrew. In fact, Mr. Adrià has several times invited the sommelier to his restaurant El Bulli, where Mr. Chartier helps suggest new flavour combinations for the menu, such as cauliflower with papaya. The Spaniard also co-wrote, with partner Juli Soler, the book's foreword, lauding it as "a paramount work, the foundation stone, the first step into a new world that is now open wide in all its splendour to those who love gastronomy."

Papilles et mol écules reassuringly affirms such classic matches as oysters with muscadet and sauternes with foie gras. But it also boldly goes where few earnest wine snobs have gone before, touting scores of far-out pairings that might garner red-pencil marks in a sommelier exam.

One example: dishes flavoured with the Mediterranean herb rosemary and the white wines of France's northern Alsace region.

"When I started research on rosemary, I discovered five or six compounds which are related to the family called terpenes," Mr. Chartier told me over the phone from his home in Sainte-Adèle, about an hour from Montreal. "These are found in moscato, riesling and gewurztraminer, yet those grapes don't grow on the Mediterranean shore. They grow in Alsace. And rosemary doesn't grow in Alsace. Each time I tried it, the matching was fabulous, especially with riesling." For the record, terpenes are hydrocarbon molecules generally associated with coniferous plants and also can impart a pine-like aroma to riesling.

Another surprising discovery was oak-aged wines with pork. Usually, experts suggest non-oaked, fruit-forward wines to go with pork. This is based on the observation that pork often is served with fruit accompaniments such as apricots, plums or even pineapple. Oak aging tends to tone down a wine's fruit character, imparting notes of toastiness, vanilla and even a butterscotch character.

Mr. Chartier's scientific reasoning, however, takes note of the fact that pork contains lactones, aromatic compounds that give aroma to apricots but which also are imparted by oak-barrel aging.

Perhaps Mr. Chartier's most controversial recommendation is high-alcohol wines with spicy foods. Conventional thinking in wine-nerd circles has long been that alcohol fuels the fire. But Mr. Chartier says it's simply not true. For what it's worth, I think he's right; try spicy Thai dishes with high-alcohol gewurztraminer from Alsace or red zinfandel from California and be amazed by the synergy.

In fact, two of the worst partners for hot food are beverages many people instinctively reach for in Thai restaurants: light white wines and beer. "It's completely crazy," Mr. Chartier says. In the case of beer, "the CO{-2} will make the burn more hot. It's like putting oil on fire. You need something full-bodied and preferably sweet instead."

My favourite Chartier suggestions are pairings I happened to discover independently through empirical testing long ago, and have championed for years: Indian curries with viognier, and chili-spiced foods such as Buffalo wings with Niagara baco noir.

Though Mr. Chartier, 44, has been a sommelier for 20 years, his interest in food chemistry was sparked by health concerns. Diagnosed with multiple sclerosis in the mid-1990s, he hit a low point in 2001. Seizing on an MS diet championed by the late physician Roy Swank, he gradually nursed himself back to health.

In the process, he befriended cancer researcher Richard Béliveau of the Jewish General Hospital in Montreal. Dr. Béliveau, an expert in the healing powers of plant compounds and author of the bestseller Foods that Fight Cancer , is also a wine lover. He encouraged Mr. Chartier to study possible aromatic-molecule links between plants and wine. "These molecules biologically are self-defence mechanisms of plants, because plants don't have legs to run away from danger," Dr. Béliveau says. "They therefore represent the flavour signature of the plant."

Only recently have we begun to understand the chemical origin of those flavours, he adds.

With access to aromatic-molecule research compiled by Dr. Béliveau and scientists at Agriculture and Agri-Food Canada, Mr. Chartier began to map out what he calls bridge ingredients that could be added to meats, fish or vegetables or used in sauces to create harmony with specific wines. Mint, for example, has dominant flavour compounds that are shared with parsley, fennel and tarragon. So he began to theorize that a wine that goes well with mint, specifically a sauvignon blanc, should pair well with dishes based on those other ingredients.

Dr. Béliveau calls it a "rational approach to epicureanism."

Martin Loignon, a senior scientist in Montreal with PerkinElmer, a large environmental-sciences company, also helped Mr. Chartier and applauds his initiative. "Very few chefs have a scientific background," Dr. Loignon says. "The information was out there, but what François did was bring it together and make the link. This is what scientists do, they make the links. He's got this sense of observation that is essential to any scientist."

If it all sounds a little too pretentious or academic for a subject as visceral and hedonistic as eating, Mr. Chartier counters that applying science to your choice of wine is no different than carefully selecting foods for cooking. Why take the trouble to prepare a meal with complementary flavours and serve the dish with a jarring beverage? "It's like cooking with bad ingredients," he says. 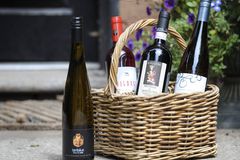 Camp vino
July 3, 2009
Follow Beppi Crosariol on Twitter @Beppi_Crosariol
Report an error
Due to technical reasons, we have temporarily removed commenting from our articles. We hope to have this fixed soon. Thank you for your patience. If you are looking to give feedback on our new site, please send it along to feedback@globeandmail.com. If you want to write a letter to the editor, please forward to letters@globeandmail.com.
Comments