Ciao, Europa. Sayonara, Nippon. Despite the global promise of its name, the International Contemporary Furniture Fair, which ended here on Tuesday, struggled a little more than usual to live up to the "international" part this year. Italian companies that normally take over a sizable chunk of floor space at the Jacob K. Javits Convention Center on Manhattan's west side pretty much skipped the fair en masse, holding cocktail parties in their SoHo showrooms instead. And Japan, which occupied its own hall in 2009, ventured a significantly scaled-down booth featuring just a handful of participants.

The upside to the defections was a focusing on design with roots closer to home, from the work of local New York studios to Canadian and Caribbean designs. Howdy, North America!

The surging interest in products from this part of the world spilled out from the ICFF to a number of New York neighbourhoods, including the new NoHo Design District, a buzzing off-site destination that hosted a grassroots cluster of design events in area shops and showrooms.

One block away, Toronto's Brothers Dressler displayed their School Chair collection at the fashion boutique Billy Reid. In the flooring showroom Relative Space, New York designer Stephen Burks even organized a Design Sale, a garage sale of sorts for designer furniture that had been previously enjoyed by other notable designers.

Back at the show itself, the absence of many big-name brands also created opportunities for smaller firms. Here are a few of the highlights, seen at the fairgrounds and around the city.

New American style A number of new American furniture companies used the show as a launching pad for ambitious new product ranges. At the top of the heap was Mattermade, an extensive collection of chairs, tables, storage units and lighting created by 10 different domestic design firms for the New York design store Matter. Of special note were the pared-down F/K/A table lamp and the Simple Machines tables, which have white ash tops and thick matching legs that twist into place like enormous screws; both were designed by Tokyo-born, Washington, D.C.-based designer Jonah Takagi.

Roll & Hill promised to make lighting more exciting with pieces like the Excel wall sconce and table lamp by New York design firm Rich Brilliant Willing, which have a Tinkertoy-like construction and appear ever so slightly off-kilter.

Those companies were joined by the young San Francisco-based furniture brand Council, which launched a few years ago but was back at the ICFF this year with a striking new collection. Among its best offerings was a surprisingly restrained chair from the blob-master general Karim Rashid. Rather than a futuristic form, the (unfortunately named) Careem chair props a simple upholstered bucket seat on top of spindly hardwood legs, striking a pose that is light and elegant.

Dreaming in Technicolor
There was a definite feeling of optimism on the floor of the ICFF, with many exhibitors reporting that they expect stronger sales in 2010 after a brutal 2009. As if to drive that point home, a number of companies showcased pieces in happy, hopeful pop colours.

Bernhardt Design, the American furniture giant, bathed many of its new pieces, including the painted wood Curio tables by Claudia and Harry Washington and the monolithic Pillar chair by Brad Ascalon, in bright pink, purple, orange and green, while Toronto's Patty Johnson, who is becoming increasingly well known for her collaborations with artisans in developing countries, presented New Caribbean Design, a collection that included the standout Liana cane chair, which is made in Guyana and is available in nearly fluorescent shades of green, orange and magenta.

Mabeo Furniture, one of Johnson's past collaborators, won the ICFF Editors Award for Furniture with simple yet stunning pieces like the Kalahari bench. Designed by Stockholm's Claesson Koivisto Rune, it has fat wooden legs that appear to puncture through to the top of the seating surface.

Wild wallcoverings
Countless companies were offering bold wallpaper patterns this year, so standing out from the crowd required something truly different. Vancouver's Rollout delivered with Wayfinder wallpaper designed by San Francisco's Mike and Maaike, who borrowed symbols from exit and restroom signs and then multiplied and expanded them to cover entire walls.

New York's Trove, meanwhile, introduced the new Fuoco pattern, which is based on an old photograph of the balconies at Teatro La Fenice in Venice. Wrap your living room with this pattern and it's like your sofa is on centre stage.

Modern history
Proving that old ideas can still be good ideas, a number of companies reissued furniture that was once thought lost to time. New York's Oasiq, for instance, presented the Capricorn outdoor furniture collection originally designed by Vladimir Kagan in 1952. The white powder-coated-steel collection includes a swooping, organically shaped lounge chair that rests on a wheeled base for easy mobility.

The Finnish company Artek reissued a piece with a very different form - the crate-like Sedia 1 chair, designed by Italian designer Enzo Mari in 1974. Its simple construction is impossible to ignore - the wooden chair ships as a collection of precut pine boards and instructions. It's your job to hammer in the nails.

A gallery of contemporary furniture
Gallery
May 21, 2010 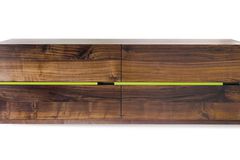