It's nearly midnight at Cioppino's Mediterranean Grill and the prima donna at Table 10 is just warming up.

Earlier this evening, she yawned through my description of the specials, huffed because there wasn't any salmon on the menu and shoved her plate off to the side before her date had finished eating.

But now that Little Miss Sunshine is draining her third cocktail, she has finally stopped complaining about the room temperature and is no longer swatting the air when she wants me to buzz off.

My legs ache. I'm severely dehydrated. And I still have to help break down the tables in the wine room, lug the extra chairs out to the hallway and do my cash-out before I can drag myself home, crawl into bed and then come back tomorrow to start all over again.

Why did I ever think that being a waitress for a week would be fun?

As The Globe and Mail's Vancouver restaurant critic, it's usually me on the other side of the table driving everyone crazy. Some say I can be harsh on wait staff, an opinion that puzzles me since I often refrain from commenting on the service - unless it was exceptionally good or egregiously bad.

Yet I firmly believe that one shouldn't dish out criticism unless one's willing to eat what's flung back, or at least try to understand it. So I recently spent a week waitressing to gain a better appreciation of what servers endure from their customers and how they perceive us.

I chose Cioppino's because Vancouver's Restaurant of the Year, so named by Vancouver Magazine, seemed the ultimate challenge. And given that I've already reviewed (favourably) this upscale Yaletown hot spot and have since become friends with chef/owner Pino Posteraro, I won't likely be writing about it again.

I must admit, however, that in the review, I was incredibly hard on the waiter, Patrick Malpass. I actually called him "The Dictator" and wrote that there was a point during the meal when I felt the urge to punch him. Ouch.

Now it's Patrick's turn to hit back. As the restaurant's headwaiter, he will be solely in charge of training me.

Is it any wonder that the night before my first shift, I have disturbing dreams, and I lurch to work feeling like I'm going to vomit?

Tuesday through Saturday, I arrive for the dinner shift at 3:45 and typically stay until 11. For the first two nights, I nervously shadow Patrick - who demonstrates a saint-like capacity for forgiveness - and simply try to stay out of everyone's way as I learn to set tablecloth creases on a perfect axis and place napkins just so.

In addition to the regular menu, the kitchen creates at least 10 daily specials that we must memorize and recite to each table, replete with details about the cooking methods, provenance of the main ingredients and potential allergens.

It's even tougher than it sounds, I soon discover, after waxing rhapsodic to one gentleman about the veal "tonatello."

"Do you mean tonnato?" he retorts, his tone as arch as his eyebrow.

Some of my early mistakes are obvious. When polishing the crystal, hold it by the stem to avoid breakage. Remove water glasses to refill or risk pouring an avalanche of ice across the table. And never scrape crumbs onto the floor. (Use a small plate or napkin.)

But then there are all sorts of niceties I never could have imagined. When directing customers to the restrooms, for example, it's best not to point. Patrick recalls a woman who once took umbrage to this indelicate gesture. "I don't want everyone to know I'm going to the bathroom!" she hissed.

"I remember my first day in school," Gaetano Tursi, a long-time waiter from Italy, recalls during a pre-service staff dinner. " 'You are not here to learn how to be waiters,' my instructor told us. 'Your first job is to learn how to be a shrink. You have to look your customers in the eye and immediately figure out who they are and what they want.' "

But what happens if the customer fibs or requests something a waiter doesn't condone?

"Does Chef know he's drinking coffee with the kingfish?" Gaetano whispers, frowning at a customer who has ordered the chef's menu.

"That's what he wants," Patrick replies. "He's allergic to wine."

Gaetano harrumphs. "Moron. He could drink water, or anything, but coffee? Seriously, I think you should tell Chef before he comes out to the table."

Patrick refuses. Chef Posteraro attends to the guest with each course (all specially prepared without wine) and doesn't say a word. But later, when the gentleman raves about some of the wine pairings sipped from his wife's glass, Chef is momentarily taken aback: "I thought you were allergic?" Nothing more is said. At least he didn't ask for cheese on his white truffles, which appears to be the only case at this restaurant in which the customer is not always right.

"Where is that little shit?" Chef bellows during a mid-evening rush.

"No Alex, you stay here," he orders, as I try to scamper out of the kitchen when the poor waiter skulks in.

"What did you tell me?" Chef shouts. "No chorizo! No spice! Then you forgot to put it down on the chit."

The waiter bows his head. "Sorry, Chef. I'm so, so sorry. I was distracted."

This isn't the first (or last) time I witness chef Posteraro's temper. He has a reputation for being extremely critical, an opinion that puzzles him (and probably explains why we get along).

He often says that he runs the restaurant like a family and sees himself as a strict father. Although I do realize that everyone is on their best behaviour while I'm here, it seems that the chef only gets angry when service has been compromised, and rightly so.

"A lot of other places are about the bottom line," says Eden Hollik, a waitress who has worked here for six years. "Pino is the only restaurant owner I've worked for who understands that if you want a certain level of service, you have to staff accordingly."

The wait staff here actually has it relatively easy. There are busboys to clear tables, food runners to deliver the meals, sommeliers to serve wine and managers who are always there to assist.

This doesn't happen everywhere, I discover later that night, when we go for drinks and meet a waiter from another restaurant. He tells me how his general manager hid in his office for 30 minutes to avoid a disgruntled customer.

It's Saturday night. The restaurant is sold out and going full-tilt. There are only two tables in my section (other servers have four to six), but Patrick is no longer hovering and I'm already in the weeds.

Table 205 is ready for dessert and I can't find a clean gourmet spoon anywhere. When I ask the busgirl, she shrugs. "Did you check the kitchen?"

Excuse me? Isn't that your job?

Now where is that silver coffee urn? When I finally find it and replenish the cups at Table 204, I notice that the colour is pale tan. Can someone please make a new pot?

"Are you okay?" the manager asks, as I stab at the touch screen, desperately trying to find the button for sambuca.

The turnover tables (restaurant lingo for second and third seating) go more smoothly. A young couple celebrating their first anniversary almost bring tears to my eyes when they tell me it was "one of the best meals" they've ever had. So what if they only ordered a half-litre of wine?

The trio at the next table is having a great time - until I ask about the crab risotto.

"To be honest, it's a little salty," the customer says. I offer to tell the kitchen. He demurs. We discuss the ingredients.

"I don't want to complain," he insists. "But maybe you could just check about the cheese."

"Cristiano?" I say, sidling up to the sous-chef.

"CHEF!" a chorus of cooks, runners and waiters immediately correct me.

My bad. "Chef," I continue, explaining the situation.

"Tell him the chef is going to make a new order right away," he says.

"Tell him the chef is going to make a new order right away," he repeats sternly.

The second risotto is less salty. "It's a whole different dish," the customer happily exclaims. "Thank you."

"This is Cioppino's," I proudly reply. "Every customer has to be 100-per-cent satisfied." (Even the pesky prima donnas.)

Looking back, I cringe to think how sappy I must have sounded. But my week as a fine-dining waitress taught me two important lessons. First, this job is no cakewalk; it's one of the most backbreaking, mind-rattling, stressful careers out there. Those, like Patrick, who go the extra mile, have earned my utmost respect.

Perhaps more importantly, at least from a critic's perspective, I also learned that poor service can't always be blamed solely on the waiter. For better or worse, it takes a whole restaurant to please a customer, and the people behind the scenes can either make or break a dinner.

I took this assignment expecting to be humbled, and I am. But if anything (and I'm sure there will be many restaurant owners and managers horrified to read this), the experience has only raised my standards even higher.

As for Patrick, he said I did okay. 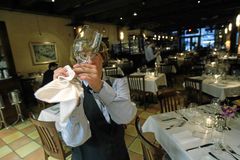 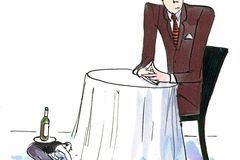 Follow Alexandra Gill on Twitter @lexxgill
Report an error
Due to technical reasons, we have temporarily removed commenting from our articles. We hope to have this fixed soon. Thank you for your patience. If you are looking to give feedback on our new site, please send it along to feedback@globeandmail.com. If you want to write a letter to the editor, please forward to letters@globeandmail.com.
Comments