The wedding of a guy named Will and a girl named Kate will be a television event like no other. Britain's culture secretary estimates that two billion people will watch the happy couple exchange vows. That's about a quarter of the globe's population. It's bigger than the Super Bowl, bigger than the World Series, bigger than pretty much anything you've ever watched on the tube. It'll be one of the increasingly rare occasions when everyone, it seems, will be watching the same thing at the same time.

The real-life fairy tale of a prince marrying his princess is a fantasy everyone loves: One of the largest TV audiences to date occurred on July 29, 1981, when 750 million people in 74 countries watched Prince William's parents get married. Despite having to wake up incredibly early, Canadians are planning to gather for teas and English breakfasts across the country to take in the diamond-studded spectacle. There's an event for every type of royal watcher.

Norma Shephard, who runs the Mobile Millinery Museum in Dundas, Ont., will be raising her teacup to the monarchy in the wee hours of April 29. The Dundas Museum and Archives has partnered with the nearby millinery museum to host a royal wedding event at Taylor's Tea Room.

Ms. Shephard will be providing colour commentary during the event, and bringing along a range of royal memorabilia, including a vintage St. George's flag, under which British monarchs were crowned from 1190 to 1603.

She says she'll be paying special attention to fancy hats worn by women at the wedding: "Hats are my first love."

The Fairmont Empress Hotel in Victoria is going big. It will host a live viewing in its tea lobby at 3 a.m. The 250 expected guests will be allowed to wear their pyjamas as they feast on a traditional English breakfast of eggs, kippers and baked beans.

The afternoon of the wedding, the hotel will also host a picnic tea on its front lawn, where anglophiles will be served tea, scones and clotted cream. "The Queen" - an impersonator of the monarch- will be on hand to address the crowd. There's also going to be a contest for the best-dressed dog.

For three nights beginning on the 29th, the hotel will also offer a royal dinner served on the Queen's China. "[It will be]a very elegant menu that was served to King George VI and Queen Elizabeth back in 1939 [at the hotel]" says Angela Rafuse-Tahir, the hotel's director of sales and marketing. The $150 dinner, which includes champagne sorbet, pheasant, and lobster cocktail, will be served on 40 of the hotel's 41 settings of the Queen's China, once used by the monarch herself, with eight pieces per setting. "We want to ensure that nothing happens to the china, so we're keeping one set of backup," Ms. Rafuse-Tahir says.

"There's obviously a fair degree of excitement," says Robert Finch Dominion chairman of the Monarchist League of Canada, with the reserve of a British nobleman. "A lot of our branches are putting on events."

The League is asking its membership of more than 10,000 to hold open houses for friends and neighbours to watch the wedding, as well as encouraging them to take the event to work, whether it's placing bunting around their cubicles or bringing a cake to the office. "It's a great opportunity simply to celebrate and rally around something positive," Mr. Finch says.

About 500,000 people visit London on any given day, according to Ted Flett, public relations manager at the Canadian office of VisitBritain. On the day of the royal wedding, that number is expected to jump to at least two million, he says. The throng will include many Canadians.

"We know anecdotally through our travel partners and tour operators here in Canada that business has been steady and brisk around the date of the royal wedding," Mr. Flett says. We just can't get enough of Will and Kate, apparently.

Wedding planners are primed for this big day, which could have a massive trickle-down effect on the industry in Canada.

"[We're]looking at it to see what's going to be new and exciting for this year," says Danielle Andrews Sunkel, president of the Wedding Planners Institute of Canada. "We're going to be seeing that style of dress for the next few years to come."

Milena Santoro, a wedding and event planner, will run a "royal wedding celebration" at the Chateau Louis Conference Centre in Edmonton, where 200 people will have an English-inspired breakfast while watching a live telecast of the wedding.

"Rather than watching the royal wedding in pyjamas, we invite brides-to-be and royal wedding watchers to wear their finest attire," Ms. Santoro says. As well as breakfast, guests will munch on wedding cake. There will also be lessons on royal wedding protocol, and more than a dozen wedding-industry vendors, from bakers to photographers.

Not everyone wants to get up at the crack of dawn to see Will and Kate say their "I dos." That's why the Eptek Art & Culture Centre in Prince Edward Island is holding a royal wedding tea on the Sunday afternoon following the big event.

A group called the Friends of Eptek will be dusting off silver trays to show guests an edited version of the wedding.

"There's just been an overwhelming response," says Estelle Dalton, a Friends of Eptek board member, who adds the group has had to cap attendance at 128 people.

Along with tea and scones, the event will also feature a vintage wedding dress on loan from the P.E.I. Museum and Heritage Foundation and photographs from other royal weddings.

"We also plan on having a wedding book in the foyer to give everyone present an opportunity to offer their congratulations and well-wishes to the royal couple," Ms. Dalton says.

Celebrate the royal wedding with souvenir drinks and doughnuts
April 12, 2011 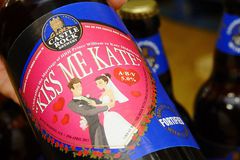