As she enters the media spotlight, Margaux Fragoso rarely meets in person. She will suggest a phone exchange if she's feeling confident. Mostly, she prefers to answer questions from behind a curtain of e-mail. For this occasion, after some prompting, she agreed to an interview via Skype.

An inky image on my screen, she is a 31-year-old, casually dressed woman, with a chin-length brown bob and dark polish on short fingernails. She speaks in halting sentences and avoids the eye of her computer. When a question is too difficult, she demurs, stuttering part of an answer at first, then saying she will respond by e-mail if required.

Ms. Fragoso is a study in boundaries, perhaps because she never had any when she was young. Her first book, Tiger Tiger, a memoir to be released on Saturday, is the story of her 15-year relationship with a pedophile, starting when she was 7 and he was 51.

"There's a social aspect to this book so it's important to talk to the media," she says. But even that good intention - to make others aware of how pedophiles operate - comes off less as bold assertion and more as tentative rationalization for why she's subjecting herself to scrutiny.

Yet while Ms. Fragoso creates boundaries for herself in an interview, she blasts away others in her writing. She spares no details. "I didn't want to write about the sex," she explains, shaking her head. "But encouragement [from editors and creative writing professors]came about because in earlier drafts, without that horrifying sexuality, it read as a romance."

Her book strips her naked for prying eyes. There are descriptions so graphic, they read like child pornography. The scene of oral-genital contact, which Peter Curran first pressed upon Ms. Fragoso at 8, "is perhaps the most indecent thing published in any major book of the last decade," New York magazine wrote in its review last month. Her child's-eye view of the adult male genitals - "The whole contraption looked like a bunless hot dog with two partly deflated balloons attached" - offers a discomfiting flash of whimsy in a tragic scene.

What makes the book exceptional is how she brings us into a child's world in order to understand the complex nature of the bond she had with Mr. Curran. There are beautiful passages about a child's warped view of magical love under the influence of a charming manipulator, who made his house a fantasyland with bright colours, pet iguanas, turtles and a big, furry dog named Paws.

She even humanizes Mr. Curran, whose suicide in 2001 at the age of 66, brought on by crippling guilt, was the catharsis that allowed her to try to heal through writing.

But the creative process was difficult. "The writer is saying I have to write on two levels, and be aware enough that I'm not that child any more so I can see him for what he is. That's hard to accept because the inner child in me wants to believe something else but the adult part says, 'No, I'm sorry. He's not a good person. He's actually quite monstrous.'

"I am still reading a lot of psychology," continues the married mother of a daughter, who recently completed a PhD in English and creative writing at Binghamton University in upstate New York and is still in therapy to deal with the trauma. (She currently lives in New Orleans.)

"He was like a cult leader," she adds, her large, dark eyes turned up to the ceiling. "In some ways I have to understand that it may be impossible to understand unless you have his level of derangement."

It all began when she met Mr. Curran at a public swimming pool in Union City, N.J., where she lived in a one-bedroom apartment with her mentally ill mother and her hard-drinking, angry father.

"I had a very romantic view of Peter. I did want to marry him when I was seven years old. … I wasn't getting that recognition in the right way. The child will take it from somewhere," she says in the detached voice of a therapist.

"I'm not saying my parents didn't love me. But my mother was psychotic and in hospital. My family was in the midst of terrible chaos."

For two years, her father kept her away from Mr. Curran, suspicious of his motives. But her mother conspired to reunite them. "One of the tactics everybody needs to be aware of is that pedophiles will be nice in order to gain trust," Ms. Fragoso says. "When they target the child, they target the family."

At one point, a social worker attempted a failed intervention. "She went in very aggressively, maybe because she had seen a lot of cases and she felt upset at this horrible situation … but the problem is she took a judgmental attitude towards me, and that never works."

By the time she was a rebellious teenager, she writes, she would sexually taunt Mr. Curran as she became aware of her power. She reveals her own level of denial and defiance as well as her sexuality - she liked pornography and wanted to get pregnant with his child - which can feel like an invasion of her own privacy.

"You have to portray both sides of yourself," she says, echoing advice from one of her creative writing professors. "It would be totally fake if I start to be the complete heroine. "

Her relationship with her parents, who are still alive, is complex. "My father should have fought a little harder," she says. But she's protective of them. "They're elderly. Physically ill. The trauma is reflected …" she offers before trailing off. "I feel at peace with the conversation remaining between myself and my parents," she responds later by e-mail.

The triumph of Ms. Fragoso is the grace of her compassion - for her younger self, driven at one point to the brink of suicide, for her parents, the social worker, even for Mr. Curran, a serial perpetrator, it turns out, who had been sexually abused himself as a child. Her recovery - much of it self-administered through writing because she had no insurance for real therapy at the beginning - has resulted in a loving marriage.

"I always thought no one would care for me," she says. "I felt ruined. But I have found out what real love is." There were unhealthy relationships that came before. "One in particular was an enactment of the trauma inside of me," she explains before declining to say more.

In a redemptive twist of fate, the writer in her is mining her own childhood. "I want to connect with others who have been through these experiences," she says, her face turned in profile. "I believe we all have a purpose," she adds, looking briefly into the eye of her computer. "It's an important part of why I'm here." 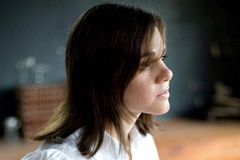 Therapist helped victims of sexual abuse, then she realized she also suffered 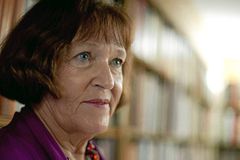