Leadership is an enigmatic quality, an umbrella term that means different things to different people. A good leader guides a team to get a job done (on time, on budget and well), but how best to do it is the subject of debate. This past week saw the classic clash between harsh taskmasters and gentle nurturers morph into a deeper conversation about the concept of being in charge.

First came last weekend's take-down of Amazon by the New York Times, a powerful treatise on how the bookseller-cum-everything-seller pushes its workers to the breaking point, on purpose. Amazonians past and present, anonymous and otherwise, spoke of a shockingly unyielding environment. Aggressive disagreements and workaholism were strongly encouraged, while snitch portals allowed colleagues to complain about those who took time off for, say, chemotherapy, sacrificing them to an annual culling of the herd.

Whether or not he's a nice guy, founder Jeff Bezos, 51, was portrayed as visionary. He's a man that knows what he wants (to sell us all everything, and have it at our doors before we change our minds) and his company has overtaken Wal-Mart in earnings, so he knows what he's doing, too. A number of employees praised his clarity of vision. For them, his environment stirs excitement and imagination, an escape from bureaucracy and slowness.

Then, on Tuesday, Lucky Peach magazine published an article by Rene Redzepi, the renowned Danish chef whose name is often accompanied by the "visionary" label. His Copenhagen restaurant Noma consistently wins two Michelin stars, and has been called the best restaurant in the world over and over.

Redzepi writes that he was trained to be a chef at a time when throwing plates and screaming curses was commonplace, which taught him to be "a bully" himself as a boss. Then, a few years ago, he let rip on a cook in his kitchen, swearing and freaking out to the point that his sous chef later told him he was out of line.

Redzepi, 37, says the experience of being called out was shameful and revelatory. Being a jerk was hurting his staff, and it also took a toll on his family and his health; but it wasn't making his restaurant any better. The goal that emerged wasn't to ditch discipline, he says, but to increase civility. For example, he bumped Noma's opening time an hour later so that staff could enjoy their daily meal together unrushed.

Both the tech and restaurant industries are regularly accused of fostering cultures that are so macho they border on misogynist. The Times notes that, unlike Facebook and Google, Amazon does not have a woman on its leadership team. Both industries have been accused of discriminating against parents (usually mothers) who can't work 18-hour days, and many of Amazon's unhappy former employees were parents who said they were pushed out of the company for wanting to balance their jobs with family life.

Redzepi's attempts to address this are well-meaning – sexist jokes are now banned in his kitchen – but he makes common assumptions about leadership and power. He calls the female chef he lambasted a "Colombian girl," for one, though it's unlikely she was a tween and unclear why her ethnicity matters. More annoyingly, he came to his deep realizations because his sous chef, another white man, is the one who called him out on it.

Least impressive is the fact that he forbids his sous and other managers to yell: Now, that's a job he reserves for himself. And he no longer shouts at individuals – just groups. Perhaps for him this is revolutionary, but for a number of women in the restaurant industry on Twitter this week, it was a Band-Aid, and one that was already peeling off.

I've never experienced either delectable Nordic edibles or toilet paper delivered by drone, but I'm going to put them into the same category: Nice, but not essential. And we're all complicit in this behaviour, in that if we keep buying stuff from wild-eyed expletive hurlers, they can consider themselves a success. We judge companies by profits and awards because there's no public accounting of which employers have the fewest crying employees. The most compelling reason not to support such places is a selfish one. The Times suggests ominously that 24/7 vigilance is the new world of work, but that's only if people like Bezos and Redzepi keep setting the standards for leadership.

The number of people who find an inordinately demanding environment exhilarating is likely not as high as Bezos might hope. For all of Amazon's proud touting of its data-driven practices, it demurred when asked by the Times to disclose its turnover rate. Sure, it's a big place, but would a successful company have over 4,000 job openings? Hmm.

Redzepi has openly singled out turnover as one of his continuing challenges. The restaurant business has a problem finding experienced cooks, he wrote, because promising young people burn out by their mid-30s. Not yelling at them – ever – might be a good place to start addressing the problem. Beyond that, perhaps it's time to listen when employees voice their ideas and concerns, and not just the ones who look the most like you.

So, back to the question of what makes a good leader – there's certainly more than one way to do it. Some employees thrive under pressure and others need a little space; the same boss might not suit both. I'd like to suggest that a significant quality is simply to be the type of person that makes other people want to stick around. 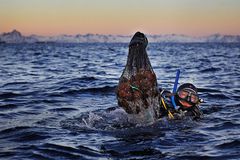