Prime Minister Justin Trudeau reiterated his government's plan to introduce more flexible parental leave, making it easier for both mothers and fathers to spread out their time at home, during a panel on gender equality Friday at the World Economic Forum in Davos, Switzerland.

But, despite his much-lauded gender-balanced cabinet, Trudeau did not come out in favour of mandated gender quotas for companies and government boards, saying that moving more women into positions of power should happen "not because you have to or because there is legislation, but because you're getting better quality of service for citizens."

And he was silent on the subject of improving daycare, even after another panelist raised the subject. The point came from the only other male member of the five-person panel – Jonas Prising, the CEO of international personnel company Manpower, who cited evidence showing the role of affordable and accessible care in creating work opportunities for women.

Trudeau instead referenced the flex parental leave, a campaign promise that would allow parents to take their leave off and on over the course of 18 months. The policy would lower benefits but allow parents to take as much as six months more time than the current one-year leave. "That's one of the things we are working on," Trudeau said.

He was the only politician on the mainstage panel. The discussion, called Progress Towards Parity, covered areas such as quotas, workplace bias and race. The panel included Facebook CEO Sheryl Sandberg; Melinda Gates, who co-runs a foundation with her husband, Bill Gates, that works to improve conditions for women in developing countries; and Zhang Xin, co-founder and CEO of Soho China, the largest real-estate developer in Beijing.

Most of the questions were directed at the Prime Minister, clearly a crowd favourite, who spoke of the need for change and his optimism for the future. But he offered few policy details.

Asked by a young female activist from Indonesia how he would encourage newcomers to Canada from patriarchal cultures to uphold gender equality while respecting their religious beliefs, he cited the diversity in Canadian schools and how that will change attitudes for the next generation. "We have to respect people of faith, but also say we share public values of respect, openness, equality – and those are the rules of the game," he said.

A recurring theme on the panel was the need for parents to avoid gender bias at home. Sandberg spoke of the "toddler gender gap" and pointed to research showing that parents tend to give sons less time-consuming chores, such as taking out the garbage, and pay them larger allowances – a tendency, she said, that carries on into adulthood, with women spending more time doing unpaid leave and receiving less pay for equal work.

"Men have to be a big part of the conversation," Trudeau said. He then told an anecdote about a recent conversation with his wife, Sophie Grégoire-Trudeau, with whom he has three young children.

"Sophie took me aside a few months ago and said, 'Okay, it's great that you are modelling to your daughter that you want her to be empowered, but you need to make as much effort to talk to your sons – my eight-year-old, my two-year-old is still a little young – about how he treats women and how he is going to grow up a feminist like his dad." By the way, he added, "we shouldn't be afraid of the word 'feminism.' Men and women should use it to describe themselves any time they want."

The Prime Minister's appointment of a gender-balanced cabinet received repeated praise from the other panelists. Asked about concerns the quota might have resulted in less-qualified choices, Trudeau said the problem was actually "too many" talented female candidates. He pointed to efforts the Liberal Party had taken to encourage more women to run for office in the first place. "If you ask a man, 'Do you want to run for office?' the first question they are likely to ask is 'Do I have to wear a tie every day?' And if you ask a woman if she wants to run, her first question is 'Really? Why me?' "

He later described an exchange that occurred in cabinet, when Minister of Democratic Institutions Maryam Monsef – who arrived in Canada as a child, a refugee from Afghanistan, with her sisters and widowed mother – spoke up on behalf of Syrian refugees now arriving in Canada. According to Trudeau, Health Minister Jane Philpott responded by saying, "While hearing you speak, all I could think of is right now there is a 10-year-old girl in Syria who could be sitting around this table in Canada in the next 20 years."

But as moderator, Lyse Doucet, a Canadian journalist who works with the BBC, pointed out, Canada still has some distance to make up. Canada placed 30th out of 144 countries in the forum's 2015 Global Gender Gap Report, falling 11 spots from the year before and out of the top 20. Perhaps, when the Prime Minister returns to the World Economic Forum's annual meeting, Doucet suggested, he will be able to boast of better numbers, beyond his cabinet appointees.

"Symbolism matters," Doucet observed, "but substance is much better."

Erin Anderssen: What we hope Justin Trudeau will say about gender parity at Davos
January 21, 2016 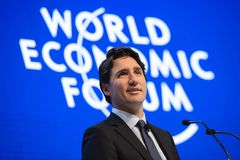 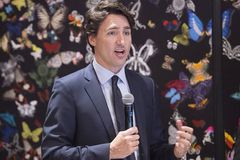