When we came to Canada in 2008, our children were 4 and 2. They didn't know a single English word.

My younger son was outgoing, but my elder son, Kai, was an introvert. He seldom joined circles or show-and-share, and played on his own.

Still, he was good at languages. He started to pick up some words. He stayed in daycare for four months, and then moved on to senior kindergarten at a public school in Oakville, Ont.

At recess each day, Kai had no friends to play with.

On the schoolyard among basketball players and Beyblade fighters, I watched him walking. Walk, walk, walk, staring down at his toes.

How silly, how thoughtless I had been to believe the myth that he would instantly adjust. Kids were not all right just being thrown into such an unfamiliar milieu.

Recently, I have learned from bilingually raised adults that being in settings where you don't understand a word is torture.

On Jan. 3, 2010, Kai was set to start Grade 1 the following day. I, meanwhile, was starting an internship at a prestigious publishing house in Toronto.

Kai was grumpy the whole day. In the evening, he started to weep, and said: "I don't want to go to school tomorrow."

I knew what he was feeling. I was 38, and was experiencing similar anxiety.

I heaved him up into my arms and went to a quieter, darker room, away from my other son and my husband.

We sat on a sectional sofa, Kai on my lap. He stared at my face. His cheeks were still wet.

"Are you afraid of school because you have to speak English again?" I asked.

"You know, I'm afraid of going to work tomorrow too. They may not understand my English."

"You, afraid?" His face faintly lit up, half in amazement, half in doubt. I know how heroic parents can seem to young children. "Afraid" and "parents" don't match.

"Yes, I'm afraid," I said. "But I'll do my best. Would you also go to school tomorrow and do your best?"

He thought for a while, then nodded.

The next day, my colleagues were all friendly and the office cozy, but I was still nervous. I almost choked when I picked up the first phone call. Kai's hanging in there too, I told myself. I can do this.

I felt sullen. I had never liked being there. The playground politics seemed too much for me.

I didn't feel like being social in my second language, and as usual I was curled up on the lawn, reading while I waited for Kai to finish playing.

When I looked up from my book, though, Kai wasn't there. I looked around. He was nowhere to be seen. I hopped up.

Seeing me prowling around, a mom who was a stranger to me said, "Kai went that way," pointing at the school building.

I scuttled to the school. Another woman stopped me. "Are you looking for Kai?"

And so did another.

At last, I saw him, together with a woman, walking across the parking lot. The woman waved at me.

"You're Kai's mom, aren't you? I found him in the washroom."

Relieved, I chided my son. "You have to tell me when you go away!"

And then the three of us walked back to the playground.

I didn't know any of these women, but they all knew that I was Kai's mother, and knew each other.

"Oh, you found him?" another woman yelled to us.

I was abashed. All this time, while I was being afraid and cowardly, slumping over my books and shutting these women out, they had built up such a caring circle.

The next day, I stuffed my Rosenthal basket with cookies and juice boxes and went to the playground. I got to know Cynthia and Linda and Deepa. There was even another Japanese mom, Mayumi.

The picnics went on until summer break, and began again in September. In the winter, we brought hot chocolate in a Thermos and waited patiently for our kids be done with sledding down the schoolyard slope.

He glides through the basketball court on in-line skates with James and Brennan.

The boys come to me, hand in hand, and press me for a play date. Kai corrects my English, and we all laugh.

"Everyone in my class loves me," Kai says. "Everyone loves me." 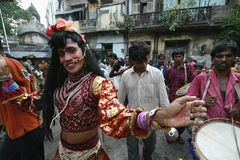 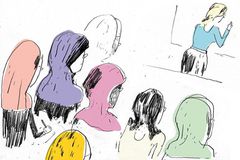